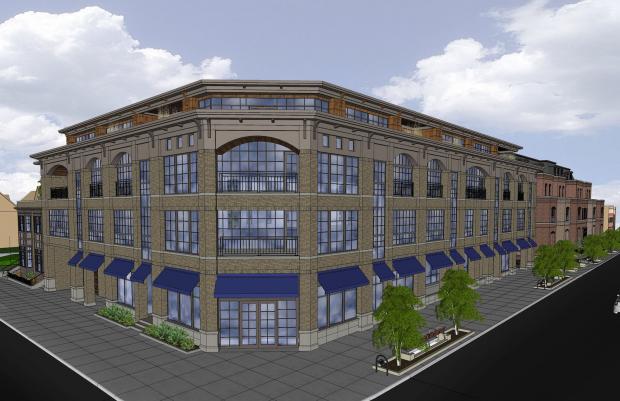 A developer's rendering of the proposed Chason Affinity project at the corner of Elmwood and Forest.
by
Aaron Lowinger
/ Sep. 12, 2017 8pm EST

The plans for the Chason Affinity condominium complex at the corner Elmwood and Forest avenues appeared to clear a major hurdle in July when the city’s Zoning Board of Appeals, at the request of the developers, approved eight variances to the city’s hatchling Green Code. That project as designed—one contiguous building four stories tall that spans multiple current housing lots—needed the variances in order to proceed in demolishing more than a dozen existing structures to make way for the new-build.

Yet resistance to the project from neighbors, and echoed by Assemblyman Sean Ryan and mayoral candidate Mark Schroeder, has bolstered a lawsuit against the developer and the city for allegedly skirting the ZBA process in violation of the city’s general law and for violating the state’s environmental review process, commonly known as SEQRA. The 14 existing buildings facing demolition include 11 homes, and all belong to a neighborhood recognized as a Historic District on the National Register of Historic Places, according to the lawsuit.

“The city should not allow eleven homes in a National Register Historic District to be demolished just so one developer can get what he wants,” said Jim Runfola in a press release sent out by the group behind the lawsuit.

A letter from the state’s historic preservation office to the city’s planning office agreed with the many critics of the project, who say that the Chason design doesn’t fit the fabric of the surrounding neighborhood. “The project eliminates the rhythm of the existing streetscape and introduces new construction that will impose, in our opinion, visual impacts that will clearly and demonstrably alter the setting and environment of both Elmwood historic districts,” wrote the state historic preservation office’s John A. Bonafide last December.

Others in the district support the project and the rising tide of property values its developers promise. Among these is Delaware District Councilman Joel Feroleto, who claims that there is wide support from the surrounding neighbors and businesses for the project. He objects to the way that what he characterizes as a vocal handful of Green Code activists have taken on development projects across the city. Neighbors to Dash’s expansion plans on Hertel have objected to people from outside the neighborhood casting judgement on that project in community meetings, according to Feroleto. On Elmwood, Feroleto claims that all businesses between Forest and Bird and 80 percent of the neighbors on Penhurst have voiced their approval for the Chason Affinity project. “There’s strong support in the immediate neighborhood on Penhurst, Granger, and Elmwood,” he told The Public.

Assemblyman Sean Ryan, whose district includes the Elmwood Avenue project, has been a vocal critic of the Chason Affinity Project. And the city’s willingness to greenlight development projects with multiple variances is an issue that Democratic candidate for mayor Mark Schroeder raised in a recent interview with The Public.

“It took them 10 years to [complete the Green Code], it’s not even dried yet,” Schroeder said. “I went to a Common Council hearing and listened to a developer present six variances to the Green Code. Six? Maybe one or two…but six? You’re ignoring the Green Code on the first project to be presented under it?”

Feroleto believes that there’s nothing wrong with variances being considered by the ZBA on a case-by-case basis. Ultimately, the approval of variances is not up to councilmen or the mayor, but the volunteer ZBA that is appointed by the mayor.

Susan Davis, one of the neighbors who is bringing the lawsuit, says, “We want to see the Green Code enforced on this project otherwise we will lose the rest of Elmwood Avenue.”

Mayor Byron Brown has campaigned on the city’s progress in tearing down blighted properties, a fact that hasn’t escaped the attention of the preservation-minded neighbors in the Elmwood Village.

“Elmwood Avenue is one of the only areas of the city that has not been affected by demolition. It is still intact,” said Sandra Girage, another petitioner in the legal action. “I don’t want to see the domino effect. If Chason can do this, what will stop everyone else?”

The lawsuit, being handled for the petitioners by attorney Richard J. Lippes, is seeking an injunction against the project. The matter will be heard by Judge Timothy Walker on October 4 at 2pm.