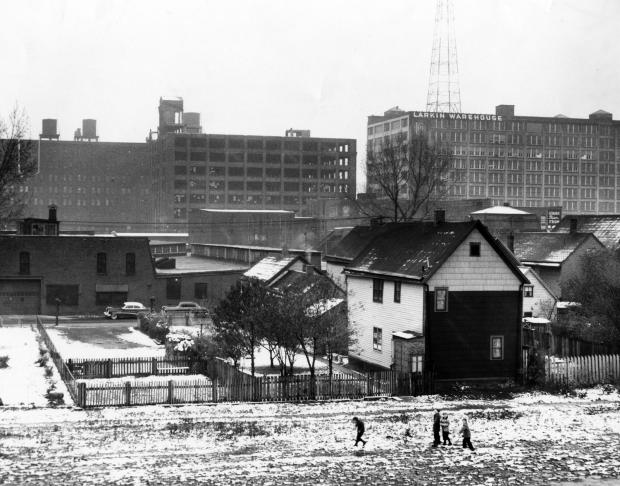 The Hydraulics, more commonly known as Larkinville today, was Buffalo’s first true industrial neighborhood, dating back to 1827. Here, in a photograph taken perhaps sometime around 1960, the neighborhood is seen looking north from the berm of the Niagara Thruway. Kids play in a vacant lot behind Roseville Street cottages. The Larkin Terminal Warehouse, now the Larkin at Exchange Building, is in the distance on the right. The Larkin P Building, burned in a spectacular fire in 1955 and demolished in 1962, is across Van Rensselaer Street at center. The Seneca Industrial Center, on the left, is seen before the concrete stucco covered its original brick exterior in 1962. This is the neighborhood of a young Tom Dudzick, who would become a playwright, and Stanley Makowski, who lived on Roseville Street all his life and was mayor during the Blizzard of  ’77.