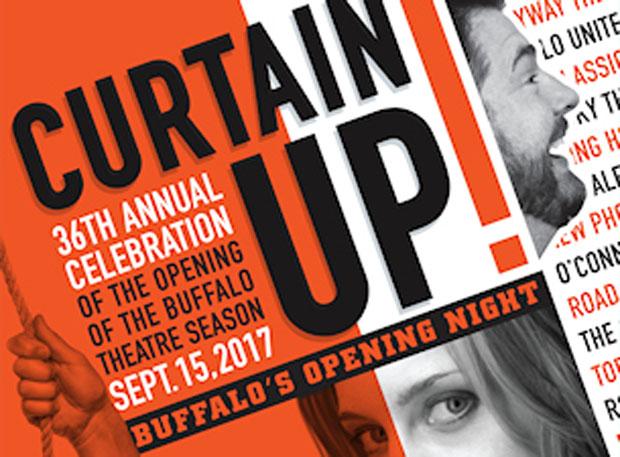 Curtain Up! has arrived: This Friday, September 15, the regional theater  with a celebration in three acts:

Act I:  You eat and drink at a restaurant in Buffalo’s Theatre District. Or you can try to sneak into the $100 per plate black-tie gala dinner on the main stage of Shea’s Performing Arts Center. (Call 716-847-0850 to see if tickets can still be had.) If you’d rather, there’s the Greenroom Gala, at $50 per person (same phone number for tickets), which will be held at the Expo Market across the street from Shea’s.

Act II:  You see a play. (Curtains rise at 8pm. See shows below.) If you can still get  to one, that is. If you can’t, never fear: Most of the Curtain Up! shows  beyond this weekend. You might choose instead to continue carousing ()maybe even stop at the BOX Gallery art opening at the Hostel Buffalo Niagara, also across the street from Shea’s) until…

Act III:  A full-on street festival on Main Street in the Theatre District: live music, dancing, , and other shenanigans. It’s free, and continues until 1am (officially) and much longer than that (unofficially).

Also, at dailypublic.com next week: Check out a preview of the upcoming season at regional theaters. Plus photos from Friday’s Curtain Up! celebration.

9 TO 5: THE MUSICAL: The stage adaptation of the hit movie, with music and lyrics by Dolly Parton. Through September 24 at Lancaster Opera House, 21 Central Avenue, Lancaster, 683-1776, lancopera.org.

DESIGN FOR LIVING: A bohemian love triangle in 1930s England, made into comedy by the inimitable Noel Coward. Opens September 15 at the Irish Classical Theater, Andrews Theater, 625 Main Street, 853-4282, irishclassical.com.

THE FEVER: A collective theater experience in which the audience and performers collaborate to examine what it means to be present together. September 15 & 16 at Torn Space Theater, Adama Mickiwiecz Dramatic Circle, 612 Fillmore Avenue, 812-5733, tornspacetheater.com. Read an interview with the creators of this production at dailypublic.com.

JOHN: ”A young couple, struggling with their future, arrives at a mysterious bed & breakfast in Gettysburg, PA—one brimming with watchful objects, where certain rooms are not to be entered and certain things are better left unsaid.” Through October 1 at Road Less Traveled, 500 Pearl Street, 629-3069, roadlesstraveledproductions.org.

MY OLD LADY: Israel Horovitz’s play about a middleaged New Yorker who becomes roommates in Paris with a nonagenarian Frenchwoman. Opens September 15 at New Phoenix Theatre in the Park, 95 Johnson Park, 853-1334, newphoenixtheatre.org.

PETER AND THE STARCATCHER: It is to the Peter Pan story what Wide Sargasso Sea is to Jane Eyre. Sort of: back story, alternate story. Winner of several Tony Awards, including Best Play. Through October 8 at MusicalFare Theatre, 4380 Main Street (Daemen College campus), 839-8540, musicalfare.com.

SONS AND LOVERS: A new play by Buffalo playwright Donna Hoke about a woman coming to terms with truths about her husband and son. Opens September 14 at Buffalo United Artists, Alleyway Theater, 1 Curtain Up Alley, 886-9239, buffalobua.org.

PLUS, AT THE SHAW FESTIVAL:

1837: THE FARMERS’ REVOLT: A play about the Rebellions of 1837, which led eventually to Canadian nationhood.

1979: More Canadian history, this one a comedy about former Joe Clark, prime minister for just 10 months.

ANDROCLES AND THE LION: An interactive take on Shaw’s re-telling of the well-known fable.

THE MADNESS OF KING GEORGE III: Alan Bennett play about the monarch’s struggles with mental illness.

MIDDLETOWN: An exploration of a small American town by playwright Will Eno.

PLUS, AT THE STRATFORD FESTIVAL:

THE BREATHING HOLE: World premiere of a play tracing Candian history from first contact between Europeans and First Nations to a world threatened by cliamte change.

THE CHANGELING: Treachery, madness, murder, lust—all the elelments of a Jacobean tragedy.

THE KOMAGATU MARU INCIDENT: Based on a 1914 incident in which a shipload of emigrants from India are denied entrance to Vancouver.

THE MADWOMAN OF CHAILLOT: Imagine that there is a rich reservoir of oil under the streets of Paris…

TIMON OF ATHENS: How not to succeed in business, win friends, and influence people?

TREASURE ISLAND: Adapted for the stage by Nicolas Billon.

TWELFTH NIGHT: A comedy with everything: a shipwreck, sassy servants, cross-dressing, a dissolute uncle.

THE VIRGIN TRIAL: A thriller about the young Princess Elizabeth navigating Tudor intrigues.

Playbill is presented by: