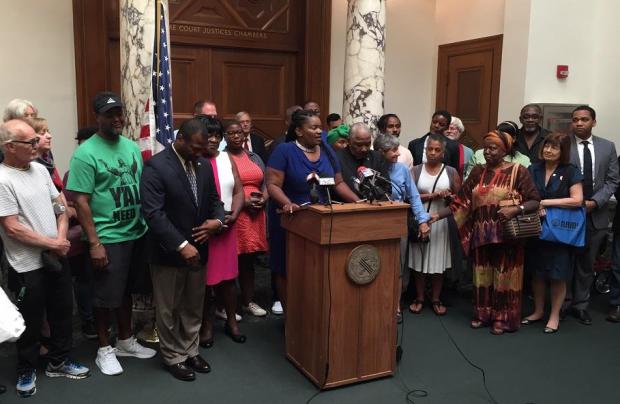 Since her death inside the Erie County Holding Center in early 2016, activists have rallied, demonstrated, and spray-painted buildings to call for justice for India Cummings. Cummings death was ruled a homicide by the state Commission of Correction Medical Review Board, which called Cummings’s treatment at the Holding Center “so grossly incompetent and inadequate so as to shock the conscience.” Those demonstrators have picked up a voice in Erie County District Attorney John Flynn, who has stated he thinks the attorney general should investigate, and an even stronger voice in freshman Erie County Legislator April Baskin, who held a press conference last week surrounded by organizers and activists demanding that the office of state Attorney General Barbara Underwood dispense with any delays and commence an investigation. It’s about time that country legislators and state politicians wake up and turn up the heat on Sheriff Tim Howard’s management of the jails and his staff’s treatment of inmates. Last week, Buffalo News columnist Rod Watson argued that after 24 deaths, Governor Cuomo should consider wielding a little-used clause in the state constitution that empowers the governor to remove county sheriffs.

Sticking with our interim attorney general Barbara Underwood, we’re pleased to see that help is on the way when it comes to cleaning up a culture of sexual abuse, and the covering up of sexual abuse, in the Catholic Church. The AG’s office subpoenaed all eight dioceses in the state for records on clergy, henceforth commencing a formal investigation.

Lame duck Congressman Chris Collins finally broke his trademarked radio silence (to which his constituents are already so accustomed) by agreeing to an interview with WIVB’s Dave Greber. In it, the federal indictee (and apparent benefactor of a President Donald Trump’s tweet last week that so undermined the rule of law that it generated immediate impeachment chatter appealed to the sympathies of good-hearted Western New Yorkers. So thick is Chris Collins’ hubris that he still obviously doesn’t believe he did anything wrong and he’s selling victim status to his community. Both Collins and Trump are attempted to reframe the charges as politically motivated, as if to pretend that the man who heads the office in the Southern District of New York that brought these charges against the prince of Spaulding Lake, Geoffrey Berman, wasn’t himself appointed by Trump.