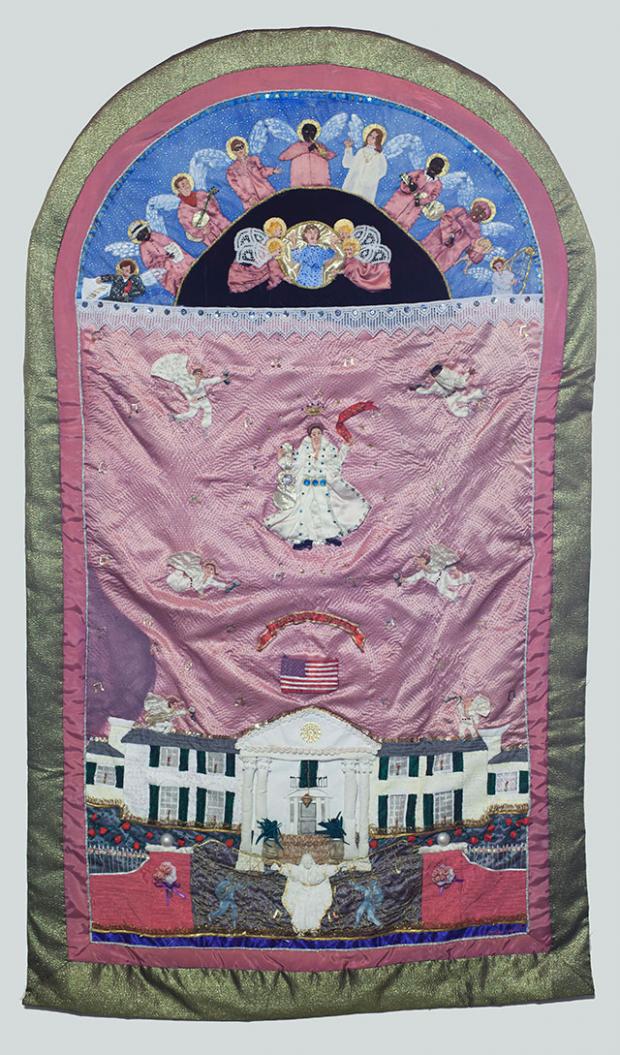 JENNIFER REGAN was a writer and visual artist. A show of her quiltwork, titled Salvaged: The Stitched Narrative of Jennifer Regan, opens Friday, September 14, 5:30-7:30pm, at the Burchfield Penney Art Center. This piece is Long Live the King, the King Is Dead.

The Burchfield Penney offers this biographical sketch of the artist:

Born in 1934, Jennifer Regan was raised in Orchard Park. In 1956, Jennifer Regan graduated from Smith College, in Northampton, Massachusetts. Regan returned to Buffalo, getting her master’s degree from the University at Buffalo in English literature.  In 1959, she married Edward (Ned) V. Regan, who later served as Erie County Executive and New York State Comptroller.

In the 1960s, Jennifer Regan became well established as a writer in the Buffalo community; she published poetry in numerous journals, and reviewed books for the Buffalo News. In the late 1980s she conducted research for a book she authored entitled AMERICAN QUILTS: A Sample of Quilts and Their Stories,”published in 1989. The same year, she edited a book of short stories with her dear friend Miriam Dow, entitled Invisible Enemies.  Regan also worked actively with the Junior Group at the Albright-Knox Art Gallery.

In 1988 Ned and Jennifer Regan divorced, and Jennifer’s conception of herself in the world dramatically changed. She struggled with the loss of her married life and wide array of emotions, and turned to art to exhaust her anguish. Regan wrote poetry to narrate womanhood within the contexts of patriarchal power. Regan soon revisited quiltmaking, but threaded in poetry and symbolism to create “stitched narratives”—these artworks were made to be displayed on walls rather than beds.

In total, Regan created over one hundred stitched narratives between 1989 and 2006, though the vast majority were created between 1989 and 2000. Regan’s stitched narratives expanded beyond her personal emotional explorations to incorporate a broad multitude of influences and purposes. Her artworks intertwine the Italian Renaissance, Freudian psychology, social issues, pop culture, religion and poetry to explore her changing role in society. Many stitched narratives reveal Regan’s sense of humor through their playful imagery and language. When her artworks dealt with socio-political subject matter, she sometimes called her them “subversive stitchery.” She created many pieces depicting Boston, Massachusetts, and often paid homage to post-impressionists like Matisse, Rousseau, and Seurat. Throughout the vast majority of her artwork, Regan’s feminist perspectives shine through, especially in regard to narratives that focused on Genesis and depictions of ancient Greek vessels. She explored different compositional structures in her work, such as a series of Roman-inspired shrines, or utilizing Renaissance styles to depict contemporary subject matter.