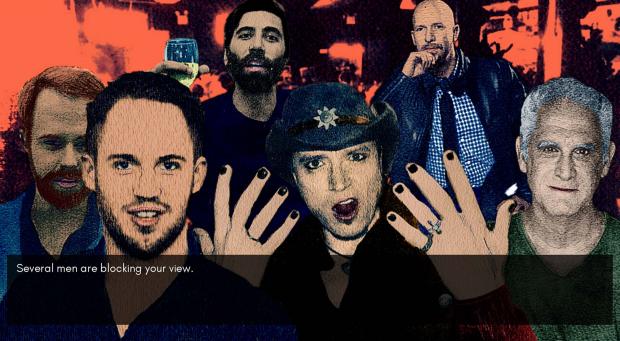 Angela Washko will talk about The Game: The Game, a video game about hooking up at Squeaky Wheel on Friday, September 15.
by
Jack Foran
/ Sep. 12, 2017 8pm EST

Art. It’s not just for looking anymore. An upcoming exhibit at the Albright-Knox Art Gallery is about art for all the senses—hearing, tasting, smelling, feeling, as well as looking. Art that renegotiates the terms of spectatorship, is how it’s billed. The show is called Out of Sight! Art of the Senses. It opens November 4. Another upcoming show at the Albright-Knox is about how artists look at architecture. It’s called Window to Wall: Art from Architecture. It opens November 18.

Across the street, at the Burchfield Penney Art Center, one of the fall headliners is the perennial favorite Art in Craft Media show, opening October 14. Work of some 50 local artists with a foot in two camps. And for something very different, beginning November 10, a show entitled The Flying Slatherpuss and Other Portals into the World of M. Henry Jones. M. Henry Jones is an animator with a punk rock sensibility and unique style.

While at Villa Maria College, another 50 or so local artists who all have in common that they all taught art at Villa one time or another over the decades. All works from the Gerald Mead Collection. Opening September 22.

And at Squeaky Wheel, some art on the edge. Work of Pittsburgh-based artist Angela Washko. Her latest iteration of her video game in which an audience interacts and engages with seduction coaches—yeah, what you’re thinking—otherwise known as pick-up artists (PUAs in the jargon). Apparently the newest profession. A warning in the press release: The exhibit contains sexual scenarios that may not be suitable for audiences under age 18. Opening Friday, September 15, with a dialogue between Washko and Stephanie Rothenberg at 7:30pm.

At CEPA Gallery, their continuing but changing exhibit—new featured artists regularly cycled in throughout the run of the exhibit, which goes into next year—called Place Relations: Identity in Contemporary Israeli Avant Garde Art. The first installment in a new programming initiative to explore notions of cultural identity from various places around the world.

At Hallwalls, a show covering four decades of the work of David Schirm, with roots reaching back to his experiences in the Vietnam War, opening September 22, with an artist’s talk at 8pm. The show is entitled All the Glad Variety.

And in East Aurora, in conjunction with the opening of the Karl Heerdt exhibit Nature’s Palette at the Meibohm Gallery, an Art Walk to a dozen or so accessibly nearby galleries and art venues. The opening is September 15, the walk scheduled from 4 to 9pm. Sensible shoes.

At Art Dialogue Gallery, opening September 16, a show of oil paintings by Gene Stumpf. Reception and meet the artist event scheduled for October 6, from 7:30 to 9pm. And opening November 17, landscape paintings by Robert Glisson.

At the Nina Freudenheim Gallery, works by Allyson Strafella, opening October 21. Drawings made with a typewriter.

And at the Western New York Book Arts Center, opening October 14, collaborative work by Mizin Shin and J. Eric Simpson. And November 10, a solo exhibition by Brian Henson. And this sounds dangerous: a fundraising event called Liquor and Letterpress. Local distilleries providing tastings of their wares, and patrons to try their hand on WNYBAC presses. November 4, from 6 to 9 pm.