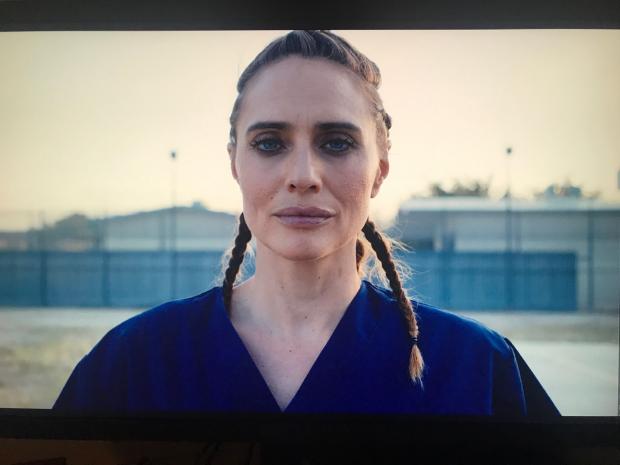 In a death row cell in a California prison sits Jane Arcs (Eli Jane). After thirteen years here the day has arrived for her to be put to death by lethal injection. She calmly recalls the events that brought her to this point. Her peaceful acceptance is in marked contrast to her earlier life as an underground street fighter nicknamed “Kill Shot.”

Less accepting of her fate is Max Stone (Kelcey Watson), the prison guard who is also her lover. Despite her resignation, he is frantically determined to rescue her, a feat that would like require him to kill several of his fellow guards.

I have tried to sketch out the plot outline of The Way, a movie which, as it progresses, seems determined to make viewers question just whose story they are following. In a David Lynch-ian turn, Watson also plays Ben Jorden, the father of the child whose death led Jane into a downward spiral. Or is Max Stone a fake name Ben adopted in order to get a job as a prison guard so that he could remain close to her during her incarceration? Your guess is as good as mine.

Jane’s spiritual salvation comes from her study of the martial art of Qi Gong with another death row prisoner. It is intimated that this study has given her mystical powers that she is planning to use to escape her fate. That would be one explanation for the perplexing final third of the film: again, your guess is as good as mine.

The technical aspects of The Way are all strong: vivid photography, careful compositions, and crisp editing. Jane and Watson both give powerful, committed performances. Writer-director Dastan Khalili displays such a firm hand over every aspect of his film (working under the constraints of the Covid pandemic) that I can only assume that the final result is precisely what he meant it to be. As such, it is recommended primarily for audiences who prefer a film experience that does not come wrapped up in a tidy package for them.