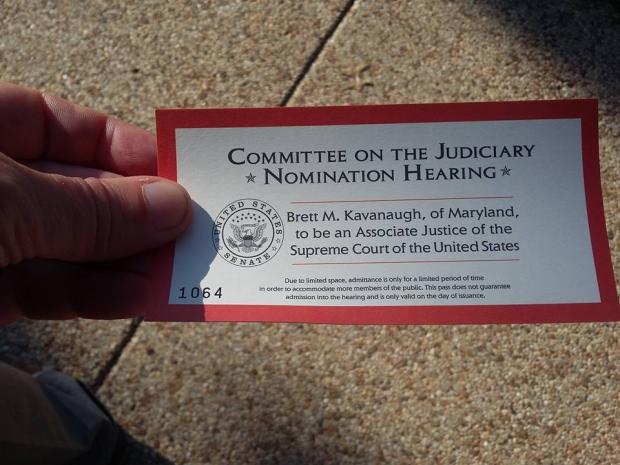 The Brett Kavanaugh Hearings before the Senate Judiciary Committee regarding his nomination by Donald Trump for the Supreme Court were on many of our television sets this past week.

Today we are pleased to present a first-hand account of what it was like to be at the hearings, to be a protester, and to get arrested there -from local Buffalo activist Heather Connor.

First, Here are some background links to the events surrounding the hearings the first week in September, 2018

The Resistance at the Kavanaugh Hearings September 8, 2018  NPR Jason Breslow

“Civility” vs “hysteria” at the Kavanaugh hearigns, and what they truly mean. Washington Post  September 7, 2018 Monica Hesse

I just returned from Washington DC where I met up with hundreds of others, mostly women from across the country to interrupt ,disrupt and protest the Kavanaugh confirmation hearings and occupy our senators’ offices . I participated in nonviolent civil disobedience direct actions and was arrested twice on Days 1 and 2.  I am watching live feed of Day 3 from home now, mesmerized as many of my new friends are occupying Sen.Grassley’s office  chanting ,telling personal stories and getting arrested.  I wish I could have stayed the rest of the week but I chose to return so that I could celebrate the first day school with my god kids.

I found out about this action through the Center for Popular Democracy and Womensmarch.com. I was inspired by the powerful #FamiliesBelongTogether occupation of the Senate Hart building in June, where women took over the lobby, their voices echoing through the building and 600 hundred were arrested. I thought to myself , this needs to happen at the Kavanaugh hearings!…. So, when I heard it was a ‘go’, I signed up and hopped on the all night bus from Buffalo.

CPD gathered us at a church in DC Monday pm for direct action training and briefing of the game plan for the week.   I was excited to meet some of my activist sheros face to face!.. Winnie Wong and Linda Sarsour from Women’s March and Jennifer Flynn from CPD…. ’Dynamic fluidity’ was the phrase that came to mind and stayed with me the next few days.  Just jump in and expect things to change at any moment! The  goals: give voice to public outrage over this nomination , shut down the hearing, pressure senators to vote no, and demand Democratic leadership fight like hell.

We were well fed, provided places to sleep,  assigned legal council , and our citation fees paid for ( So , please donate to populardemocracy.org and womensmarch.com)

DAY 1 Tues. We “held the line” outside the Senate building to get free tickets into the hearing. Small groups of the public were escorted in and allowed to stay for about 20 mins. Many of us that went in, stood up shouting personal messages like “this is a travesty of injustice!” and “who will protect my reproductive rights and the rights of my daughters ” ,… and were arrested within a 5-15 seconds , long enough to be heard.

Others, like me, did direct action in the hallway outside the hearing. I was arrested with a group of nine for sitting , chanting as senators were exiting for lunch.  We were warned 3 times to get up , then gently picked up and cuffed. We were processed in about 3 hours , given disorderly conduct ‘post and forfeit” citations and released after paying 50  bucks. Not a serious charge and no hearings. The capital police treated us, for the most part ,veeeeeery well and were friendly and courteous.  I was told later on that they were informed of some of our plans ahead of time.  70 people were arrested the first day with no problems.

That evening a group of us staged  a ‘sleepover’ in Chuck Schumer’s office. We were welcomed and initially told  we could stay all night,  then kicked out around 10pm. we demanded that Chuck work harder to whip ALL of the democratic vote against Kav.

Day 2 Wed.   Back in line at 7am . Refreshed from a few hours sleep in a donated hotel room with 2 elders and a disabled woman , I decided to go into the hearing with the first group and say my peace.  The process continued same as the first day, with  security recognizing us, smiling ,…the line was much shorter.. We shared stories from the day before, ate our breakfast sams , and I taught “the floss” dance to some of my new BFF’s….then it was time to go in.

In the media room just outside the hearing doors , my group held up our palms  marked with “we, dissent “.

Inside I felt calm, sitting down ,flanked  by veteran activists.   My friend Dave stood up first  and started yelling responding to Grassly ‘s opening remarks about the Dems staging protesters. ‘Im here representing myself and defending the rights of all to health care’ (paraphrased).  I waited about 10secs. while he was being escorted out and started to yell: This is not a  legitimate hearing! This is a corporate coup  Corporate coup! Who will protect Mother Earth ? Mother Earth! Mother Earth!, Mother Earth !…

Again , we were treated gently,  taken to the basement , plastic cuffed, and  paddy wagoned to a nearby holding center.  Many of the same officers said ” good morning , nice to see you again!”  This time the processing only took 30 mins. and our citation fees were $35!  Many went right back to the hearing line to go in again.  At least 25 -30 more arrests ensued .. not sure the total of the day from other groups. I was satisfied with 2 arrests so I headed back to do support.

By midday day it was oppressively hot .I spent the afternoon making sure my new elder friend Ruth (and myself), did not get heat stroke.  We visited Sen. Kamala Harris’s office to thank her , cool off and watch the hearing on TV.  Then we headed to Alaska Sen. Sullivans office for a large group “visit”.

Around 5:30pm I hugged and said goodbye to all of my new friends within reach. So many courageous wonderful beings! …most staying until Friday.   Then I walked one block to Union Station and got on another all night bus back to Buffalo.

My heart is full! Made it back in time first day of school supper.

Please rise up in what ever way you can and donate to populardemocracy.org and womensmarch.com