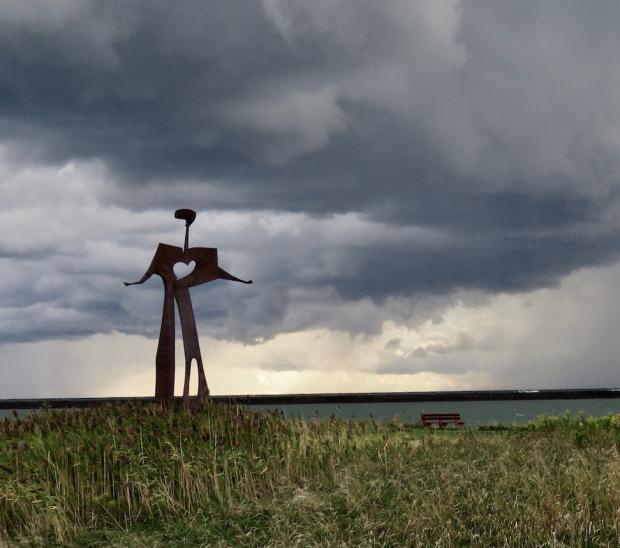 This past week has brought some spectacular bird visitors to the Outer Harbor of Buffalo.

Local bird observers have found really spectacular opportunities to view a wide variety of species of migrating neotropicals and shore birds from the Times Beach Nature Preserve to the Bell Slip. Some are rare.  The abundance and variety of species is one of the reasons that is a part of the Niagara River Corridor Globally Significant Bird Area. (IBA)

This IBA helps to characterize how our region connects to seemingly far off places by supporting conservation for birds and the habitat that supports them.

Many of the birds coming through here now, as well as many that had nests and young here this season literally have profound connections to the Arctic and the Amazon.

Fall warblers have been in abundance at Times Beach for almost two weeks. Unusual warblers including Golden-winged, Black and White, Cape May, Canada, Magnolia, Wilson’s, Blackburnian, and almost a dozen other species have been observed.

Other birds such as Swainsons Thrush, Red-eyed Vireo, Philadeophia Vireo, Scarlett Tanager, Grey-cheeked Thrush, and even an extremely rare Loggerhead Shrike have been observed at this incredible Nature Preseve in the past 10 days.

If you see this in time, the the Buffalo Ornithological Society is hosting a fall warblers and more bird trip to the Times Beach Nature Preserve this morning, Sunday September 10. The Trip will be lead by Jajean Rose-Burney and begins promptly at 8am.  The public is welcome. Please remember, Times Beach is a nature preserve and no dogs, or bikes are allowed inside the preserve.

The Bell Slip/Seaway Pier area has also had an abundance of unusual migrating birds.  Migrating shorebirds including Ruddy Turnstone, Black-bellied and Semipalmated Plover, Semipalmated Sandpiper, White-rumped and and Baird’s Sandpipers have been seen amongst Sanderlings, Spotted, and and Solitary Sandpipers.

Many of these birds breed in the arctic, and are on their way to Central and South America where they winter.  This connects our conservation strategies with global environmental sustainability.

One of the more exciting birds that has been regularly observed this week is the Whimbrel.  This large shorebird with a downcurving long dark beak is pretty rare but not unheard of for this area. The bird breeds in the Arctic and migrates through here on its way to South America.  Single birds (possibly more than one), have been seen at the Bell Slip with the other shorebirds in the grasslands and paved parking area near the Bell Slip area where the Italian and Irish Festivals were held this past summer (former site of the Pier Restaurant), and at the site of the newly erected Flat Man Sculpture, just west of the Bell Slip inlet.

This is an incredibly rich and diverse shorline area that continues to be threatened by development and activities that have no conservation context.  The Bell Slip, which contains a number of habitats including rare shoreline grasslands, and an emerging willow and cottonwood forest surrounded by a rare sand barren that hosts a number of rare and unusual plants such as the Spotted bee-balm are some of our most valuable ecological treasures. Globe-trotting birds, migrating pollinators including the Monarch Butterfly, and native bee species depend upon these local areas for habitat.  It is increasingly rare to find shorelines in our region that have not been developed.  We need to protect these areas.

Conservation oriented people often think of big picture items such as “Save the Oceans”, “Save the Arctic”, “Save the Whales”, and “Save the Amazon”.  It is fundamentally clear that how we protect these migrating and breeding birds right here, are critical conservation opportunities for the planet.  We need to protect our vanishing local habitats. They make our place a better and more valuable place.

That is one of the reasons that local environmental activists including Riverkeeper (now called Buffalo Niagara Waterkeeper) and myself, are engaged in serious legal efforts to stop the 23 story Queen City Landing project on property adjacent to the Bell Slip. The good news is that we are still in court on this one. It is not over. The fact that we delayed this project for another construction season comes with the probability that we may have saved the lives of thousands of birds this season, including the many young swallows and other migrating birds that are typical victims of glass building collisions. “Save the Arctic” and “Save the Amazon” are real global conservation strategies that rely on what we do locally in this incredibly significant place.

For the sake of ours and of future generations, we cannot afford to make these kinds of economic development mistakes.  Developers and politicians have to pay attention to why we have a Niagara River Corridor Globally Significant Bird Area.