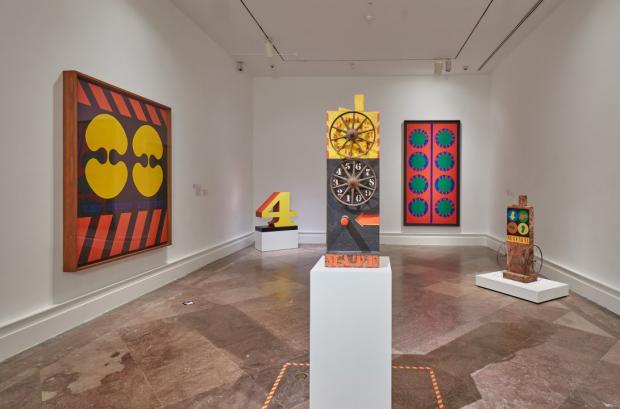 You know the minute you step into the huge Robert Indiana show at the Albright-Knox—from the first items you encounter—you’re in for a voyage. American epic voyage even. American odyssey. The first items you encounter are in explicit reference to the great American epic novel, Herman Melville’s Moby Dick. Sculptural works made of mast segments of sailing ships not unlike the Pequod, the vessel Ismael, the narrator, and his bosom companion Queequeg, sign onto as crew for a whaling expedition. One work entitled Call Me Ismael, the iconic opening three words of the novel. Another entitled Ahab, the maniacal ship’s captain, on a personal vengeance mission to find and kill the white whale that previously had dismasted him of a leg. Nearby, three paintings in similar format—large circle motifs and quotations and place names lifted from the first chapter of the novel, the first page, in fact: There is now your insular city, Corlears Hook; City of the Manhattoes, Coenties Slip; and Circumambulate the city; Whitehall. The place names references to locations in lower Manhattan associated with shipping, and where Indiana lived for a time in a relationship with fellow artist and mentor Ellsworth Kelly, and where Melville lived and wrote his early works and the first parts at least of Moby Dick. The homoerotic thematic of Moby Dick would have resonated personally for Indiana, as surely did the even more blatant homoerotics in the work of another American epic poet and once lower Manhattan resident Indiana makes regular reference to, Walt Whitman. Nearby the Melville works is the Albright-Knox collection painting called Year of Meteors, the title of a Whitman poem composed almost precisely a century before the painting. With quotations from the poem, stencil-lettered on circles within and around a star. “Nor forget I to sing of the Wonder.”

And for legitimacy as an American odyssey, not just a water voyage, but terrestrial expedition as well. Particularly for an artist voyager born and raised in the prairie Midwest—the State of Indiana in fact—commemorated in the name he changed his birth name to when he relocated East, and in his artworks in the wagon wheels component of most of the sculptural works, among other agrarian components such as farm tools or tool parts, pitchforks, hay rake tines, etc.

And for moral legitimacy, not unmindful of the direst adverse aspect of the trek west component of the American story, the genocide decimation of the American Indian population, commemorated again in the artist’s adopted name, and in several artworks with explicit reference to poet Henry Longfellow and his try at an epic poem, The Song of Hiawatha.

Plus in addition to the aqueous and terrestrial components of the epic, including—in the invariable tradition of the epics of Homer, Virgil, Dante, even James Joyce—voyage to the underworld, the realm of the dead. With a proper guide. One of the largest and most prominent sculptures represents Thoth, the ancient Egyptian god more or less equivalent to the Greek god Hermes, one of whose chief offices was to escort the souls of the newly deceased to the underworld. (Thoth also had functions related to the newly deceased, but more prominent other functions, such as expertise and jurisdiction regarding science and learning, so letters and numbers, which are principal Indiana motifs.) But most of the sculptures on show—including the Thoth sculpture—have particular reference to Hermes. As versions of a type of sculpture commonplace and ubiquitous in ancient Greece called herms. Which consisted simply of a rectangular cross-section stone column, with a sculptured head—the god Hermes—above, and phallus below. The majority of Indiana’s sculptures are columns, though wood rather than stone, with a fanciful suggestion of a head above, and usually prominent—and more readily identifiable than the head—phallus below.

Except for his best-recognized sculptures—maybe best-recognized modern art image period, eventually mass-produced alternately as sculptures or two-dimensional works—it started out two-dimensional, as a Christmas card for the Museum of Modern Art that then went viral and everywhere—it became a postage stamp—the famous LOVE piece. The L and O above, resting on the V and E below, the O at an angle. The central atrium room of the 1902 building is given over to multiple sculptural versions of the work, in as many exotic and beautiful marble types, plus one in iron, and two translation variations, one in Latin, AMOR, and one in Hebrew lettering. Indiana ultimately came to despise the LOVE piece—the immense popularity of the piece—for overshadowing his very different more serious work. And refashioning his own image from avant-gardist to kitsch sentimentalist.

Other works include homage series to artists Marsden Hartley and Charles Demuth, in part based on personal identification with both artists related to sexual orientation, and to Hartley’s art related to his unique amalgam of abstract and representational elements in bold coloristics, and to Demuth related to the precisionist mode and movement Demuth was associated with, and in particular Demuth’s famous painting, I Saw the Figure 5 in Gold, related to Indiana’s signature fascination with numbers. (A large-scale set of his numbers 1 to 9 and zero are currently installed in Wilkeson Point Park, in the Outer Harbor.)