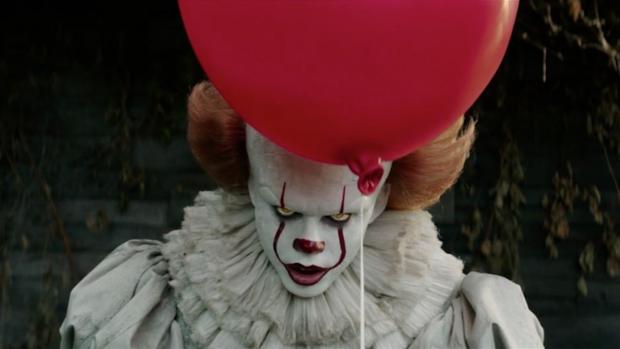 Bill Skarsgard as Pennywise in the new adaptation of Stephen King's IT, which opens this week.
by
Gregory Lamberson
/ Sep. 9, 2017 2pm EST

Stephen King’s lengthy novel It, about a shape-changing creature who preys upon children in the fictional town of Dairy, Maine, was previously adapted for TV in 1990 as  a mini-series notable for Tim Curry’s portrayal of Pennywise the clown, the guise It most frequently assumes. Curry’s performance spawned a subgenre of killer clown movies which flourishes to this day (not to mention the “creepy clown” phenomenon around Halloween time). The mini-series, like the novel, jumped back and forth in time between the 1950s, when a group of misfit kids called “The Losers’ Club” battle Pennywise, and the 1980s, when the adult versions of those characters reunite to finish what they started. The childhood portions of the book were more interesting than the adult segments, and the new theatrical film version, opening this Friday, tells the story in chronological order, depicting only the exploits of the adolescents (a sequel with the adults will follow).

As a storyteller, King has always dwelled in a realm of Americana somewhere between Steven Spielberg’s sunny suburbia and David Lynch’s seedy small town underbelly. The abusive characters next door tend to be as frightening as whatever supernatural predicament arises. This new adaptation, written by Chase Palmer, Cary Fukanaga and Gary Dauberman, captures King’s small town America better than most adaptations of his work, while resetting the action from the 1950s to 1988. Pennywise is a classier version of another supernatural child killer, Freddy Kreuger, and revising the time period allows the kids to attend A Nightmare on Elm Street 5 rather than I Was a Teenage Werewolf (though the bikes they ride still look like they’re from the 50s).

The characters are vintage King, believable and recognizable from daily life (one young bully even resembles King), and the kids are perfectly cast, with Finn Wolfhard from Stranger Things the most recognizable. If you’re unfamiliar with the source novel or mini-series, the film will likely strike you as a big budget version of the aforementioned Netflix show. Sophia Lillis plays the sole girl in the Losers Club, and she devours the screen as surely as Pennywise does the limbs of his victims; This girl has a major career ahead of her. The dialogue is smart and funny, often delivered rapid-fire ala The Front Page, almost mandating a second viewing to fully appreciate.

The filmmakers have learned from what worked in the best King film adaptations: the nostalgia of Stand by Me, the earnestness of The Shawshank Adaptation, the symbolism of blood in Carrie, and one of Danny Torrence’s visions from The Shining can be detected beneath the surface of Andy Muschietti’s confident direction. It isn’t often that a major studio takes a chance on a big budget, R-rated horror film with such successful results. Bill Skarsgard is chilling as Pennywise, and the buildups to his appearances are suspenseful. I can’t say if the film is truly frightening, as all of the big moments at the packed screening I attended were ruined by a woman shouting at the screen like a Greek chorus, but I found this to be among the best adaptations of the King’s work.