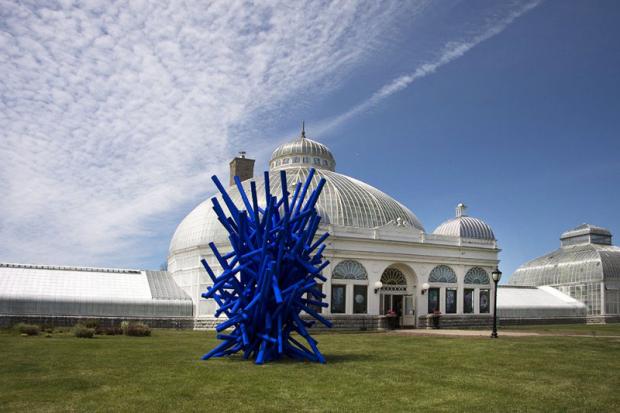 Art enhances nature at the Botanical Gardens currently with a score or so of sculptural works by Canadian artist Shayne Dark indoors and out—part of the Albright-Knox Public Art Initiative—as well as colorful photos of succulents by Eileen Graetz in the Arcangel Gallery.

Sculptural works sometimes half-hidden among the greenery. You have to hunt for them. Except the one you can’t miss as you approach the facility’s main entrance. On the lawn off to the left, a huge jumble tower of what look like Styrofoam logs in bright blue. Not Styrofoam, it turns out, but wood. It’s the electric blue hue that could make you think Styrofoam. But Shayne Dark uses real materials. Wood and metal. Not plastic. (The piece has a particularly Albright-Knox resonance, being a little reminiscent of the Nancy Rubins canoes jumble piece in the Albright-Knox entranceway off Elmwood. As well as of the Kenneth Snelson tensegrity structure off to the left behind it.)

Off to the right of the Botanical Gardens pathway are three huge and mighty Corten steel pieces the artist calls “dropstones.” As if they had dropped from the sky, from another world, another universe. Like gemstones revealing an irregular crystal structure, reflecting an alien physics of the distant universe from which they originated. Irregular polyhedra, recalling the regular polyhedra of various sizes and configurations astronomer Johannes Kepler posited to explain the physics of the present universe.

Smaller versions of dropstones are found inside the buildings. In metal and wood, partially concealed among the tropical plants in the crossways central area, or more out in the open in the Southwestern deserts corridor, like boulders among the cacti. Other, skeletal or network versions are found in some of the outdoor gardens. Like experimental endeavors at geodesic domes, resulting in erratic polygons, and more or less spheres in place of hemispheres.

Other sculptures of wood are in roughly bowl forms, gouged and hollowed out, and charred black. Others in vaguely anthropomorphic forms. Abstract sinuous forms, or more strictly pillar forms. In one instance—a set of six pillar forms copiously sliced into over all surface areas as if with a chain saw or circular saw, resulting in intricate surface patterns of small squares and triangles, then painted black—with the human-reference title Heroes.

Other wood works more in the vein of the logs tangle piece near the entranceway, but now not logs but whole trees, or the better parts of whole trees, whole major branch structures, denuded of bark and painted bright colors. Suggesting giant octopi, giant spiders.

And hanging from the conservatory main dome, directly over the central crossing (on the line of the 79° W, 101° E, so-called Buffalo Meridian), a cluster of gnarly, knotty apple tree clump root formations, entitled Windfall.

Succulents and their Defenses might well be the title of the Graetz photos exhibit. Bright red needle tips on the spikey green shoots of the Hedgehog Agave. Formidable-looking and beautiful in equal measure. A dense array of bright red thorny excrescences on the otherwise smooth green leaf of the African Aloe. So that all the more surprising to see varieties completely lacking apotropaic protuberances. Such as the exquisite pale blue-green Ghost Crassula.

The Eileen Graetz succulents photos remain on display through October 4, coinciding with the run of a Botanical Gardens actual succulents special display. The Shayne Dark sculptures exhibit also runs through October 4. In addition, the artist will be on-site for a one-week residency September 14 to 20—again part of the Albright-Knox Public Art Initiative—when he is slated to create a site-specific installation of local organic materials either succumbing or succumbed to natural life-cycle effects. No plant (or for that matter animal) species will be (seriously) harmed.