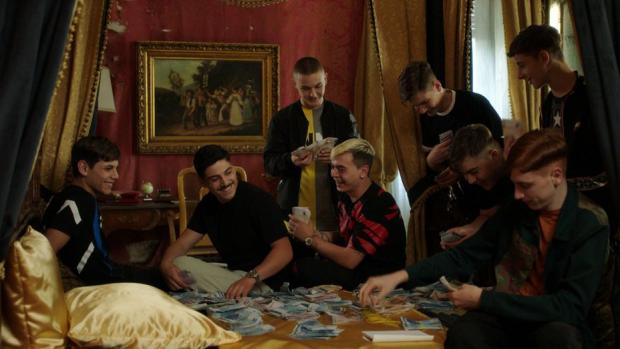 The market for books and movies about the Mafia has never much diminished, but it got a shot in the arm in 2006 with the publication of Gomorrah, Roberto Saviano’s expose of the Camorra, Naples’ answer to the Mafia. The book sold four million copies around the world and made Saviano a marked man in his home country: he has been under what is expected to be permanent police protection since shortly after the book’s publication. In 2008, it was the basis of a film that was Italy’s submission to the Academy Awards, and a television series inspired by it is now in its fourth season.

The new film Piranhas is based on Saviano’s third book, La paranza dei bambini (2016). Inspired by real cases of teenagers who grow up idolizing gangsters, it traces the rise of Nicola (Francesco Di Napoli, like most of the cast a non-professional actor). Fatherless but protective of his mother and younger brother, he seems to spend no time in school but rather roaming the streets on scooters with his five friends. Even though the Camorra likes to keep its affairs secret, they know the careers of all the local mobsters, and when it seems that the police have thinned their ranks they see this as an opening.

Where Gomorrah was filled with immersive details showing the Camorra’s stranglehold on life in Naples, Piranhas plays more like a teen drama in which organized crime is a backdrop. Director Claudio Giovannesi (Fiore) uses a fluid camera to track this mini-gang, holding us to their perspective. That they adapt to violence and murder so easily is something you have to remember to be shocked by, just as you’re left to your own devices to fill in the film’s ending (so inevitable that Giovannesi doesn’t even show it). It will be playing through the end of the week at the North Park Theater.

When Zero Mostel as Sholom Aleichem’s everyman milkman Tevye sang “Tradition” at the Broadway premiere of Fiddler on the Roof in 1964, it was to audiences who had come to think of that as an outmoded quality. In every way, the 1960s were a time of out with the old and in with the new, a lesson that Tevye struggles with as his three daughters leave the world he has always known behind.

The new documentary Fiddler: A Miracle of Miracles examines both the development of the much loved “dark musical” and its enduring popularity for audiences all around the world. It uses clips from numerous productions, including one from Japan, where, as one of the show’s creators recalls, someone asked him, “Do American audiences really enjoy this show? It seems so Japanese.” A seemingly endless stream of celebrities appear to discuss the show’s ongoing legacy, most entertainingly Lin-Manuel Miranda who is seen performing a number from it at his wedding with his new father-in-law. Now playing at the Dipson Eastern Hills Cinema.