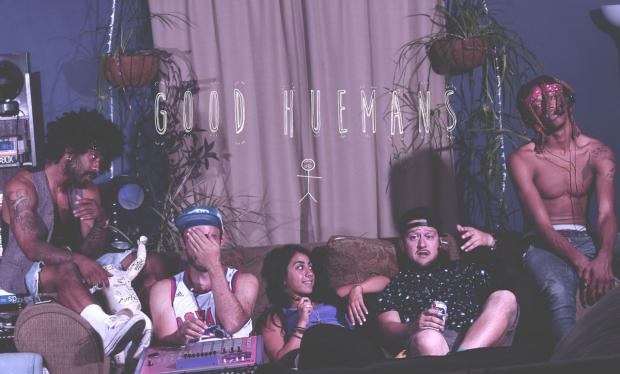 Pry open the lid of any budding street-corner philosopher and they will tell you that there is a vast difference between the concepts of knowledge and understanding. Certain information is able to be passed along by way of language that, once consumed and processed becomes knowledge. Understanding, on the other hand, is more rare and sacred—something ultimately personal.

As a rapper who is well aware of the limitations of words, Truey V. of the Good Huemans Collective, lives out his life in the valley where the two seek to become one. He describes the medium of art through which he expresses himself as one in which he is the brush and the world is his canvas. This ethos underscores an energetic movement in which the particulars of language play second fiddle to the raw underlying message of loving acceptance that is felt as much as it is heard.

Likewise, it should be said that telling a story about an organic entity like Good Huemans ultimately does very little to transmit an understanding of what the group is on an energetic level. The historical facts are easy enough to relate to: The collective was born out of the passionate desire to merge two seemingly separate worlds when rapper Truey V, who had been creating positive vibrations through music and community on the East Side of Buffalo, joined forces with WZA of the group Radarada, an artist more active in the Elmwood Village and West Side. Along with members Komo Rebi, Short Moscato, Hitch Burney, and DJ Chauncey Tails, the extended collaboration has further expanded the scope of both its geographical and stylistic terrain.

Attempting to move beyond the facts and foray into deeper descriptions about the group inevitably gives way to linguistic calisthenics bordering on the absurd. Take for instance the following masturbatory fiesta that I had originally drummed up to begin this article: Although Good Huemans Collective performances may appear as hip hop gatherings per usual to the elderly, the chronically uptight, or the prototypical black-notebook-toting music critic with atrophied third eye syndrome, upon further review in the esoteric referee replay booth effervescent dianetic energy can be seen spraying wildly like hot pink lemonade from a prismatic genetic coil of punctured firehoses back and forth between each very alive and active participant present.

If that meticulously craft-brewed sentence didn’t do the group justice, it is because no words likely will. Think back to those classic 1990s Apple Jacks commercials where the arrogant adults with dead imaginations attempt to dissect what it is about delicious cereal that kids love so much. Wearing the journalist’s hat I find myself caught up in a similarly futile dilemma attempting to illustrate and relate the Good Huemans ecstatic exuberance. Truey V. was keen enough to anticipate and share this exact prophetic premonition with me when I interviewed him at a lively gathering of friends last week.

“You know, instead of writing something about us, it might be better to get a film crew down here so people can just see us in our natural habitat like a National Geographic documentary,” he said. I couldn’t agree more! After all, as language is a primary tool of the hip hop artist, reading an article about one such is akin to viewing a photograph of a photographer taking a photograph.

To simplify: Go forth! Look, listen, and vibrate along with Good Huemans this Saturday, September 12 at the Music is Art Festival, so that you may drink deeply of the sugary milk bowl and know for yourself what it is that I have failed to describe unto you.