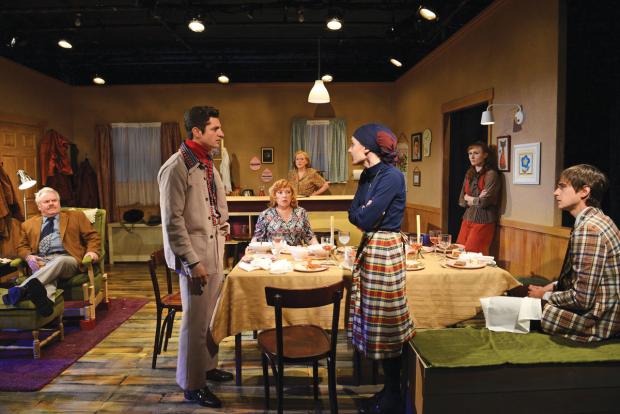 The best part of theater is rooted in the ancient soil of human conflict.

This thought is brought to mind, in part, by recent obituaries for filmmaker Wes Craven. Commentators praised Craven’s ability to elevate run-of-the-mill, shock-and-popcorn flicks to movies of higher distinction by tapping into primal human fears. In equal part, if potential ticket-buyers look over brochures listing the dramas playing in local theaters this year, they will find narratives that connect with essential human conflicts, regardless whether any particular play is serious or silly. Now, if you’ve made it past the New York State Regents Exam in English on your way to Curtain Up!—the September 18 debut of the new theater season in Western New York—then the roster of conflicts usually found in art will be familiar to you. Yet, between self vs. society, the standard for so many outsider narratives, and the existential substance of self vs. self, you will recognize vital themes at work.

There are many non-theatrical civilians who consider theater somewhere between morally loose and utterly godless. Those folks may be surprised at the nuance to be found in the discussion of religion and faith on stage this season. Characters will be seen struggling with the strength of their beliefs, representing a wide range of religions. Questioning faith is tantamount to wrestling with god. (Or God, if you prefer.) It begs answers earthly as well as divine. It requires intelligent performance and engagement with an equally intelligent audience.

Among the first up will be Doubt, John Patrick Shanley’s award-winning drama, which is the Curtain Up! selection presented by Buffalo Laboratory Theatre, staged by Katie White.

Doubt does not contend with exalted popes, European royalty, or peasant visionaries. It does not deal with border wars, the heresy of science, or the blasphemy of art. It does not need vaulted cathedrals for its locale. Shanley makes much with very little. A cast of only four actors. A working-class parish in the Bronx during the early 1960s. All that is needed to set off an enflamed drama is the spark of suspicion.

Sister Aloysius is principal at St. Nicholas Church parish church. She holds great sway over students, parishioners, and others of the vocation. Father Flynn arrives at St. Nick’s after several other assignments. Young and personable, his immediate popularity puts a chink in Sister Aloysius’s authoritarian reputation. Adding to the tension, Sister suspects that Flynn has behaved inappropriately with one of the boys in the school—the only African American in an otherwise white population. Accusations escalate to point where the key players undertake unchristian actions.

Fittingly, Shanley has dubbed his play a parable. It is concise and impactful. It is instructive but not judgmental. Its moral is spoken early in the show when Flynn delivers a homily stating that doubt is a force unto itself, “as powerful and sustaining as certainty.” Ellen Horst, David Hayes, Annette Daniels-Taylor, and Anne Roaldi-Boucher perform.

The mid-century setting for Doubt is prevalent in several other dramas featuring characters questioning faith and religion. My Name Is Asher Lev is a 2012 stage adaptation by Aaron Posner of Chaim Potok’s 1972 novel taking place in the 1950s. Young Asher aspires to be a painter and works hard to bring his artwork to the attention of New York City galleries. Inwardly, he is torn by a career and subjects that seem at odds with the Hasidic upbringing he has received from his devout parents.

Shalom bayit is a Hebrew phrase meaning “peace at home.” As a social value it is more comprehensive and imposing than the fifth commandment. The phrase suggests service to others as well as the most profound personal responsibility. If Asher remains true to himself and his talent, he disrespects his religious parents—truly a dishonor after the Lev family has come through the Holocaust. If he lays down his brushes out of family respect, he will never know peace within himself. Adam Yellen plays Asher. Josie DiVincenzo and Tom Zindle play the parents and a slew of other characters in Jewish Repertory Theatre’s production, which opens in October.

King o’ the Moon and For Heaven’s Sake! have much in common. Both are Curtain Up! choices, at Kavinoky Theatre and 710 Main Theatre, respectively. Both are set during the subject time period, an era of urban decline and social turbulence. Importantly, both were written by native Western New Yorkers. King o’ the Moon is the second installment of Tom Dudzick’s Pazinski family trilogy set in the rusty heart of Buffalo’s old industrial neighborhood. For Heaven’s Sake! is a new play by Laura Pedersen, an established novelist and award-winning columnist, her baptismal effort as a playwright. Both deal with Catholic families trying align their lives with church traditions and more recent teachings. Long, closely held standards are becoming obsolete as a result of Vatican II. Everything from fish on Fridays to gender roles to English-language Mass have been called into question.

King o’ the Moon features characters familiar to Buffalo audiences, having been introduced to us in the previous Over the Tavern. In both, Dudzick hints that the times are a-changin’ but that the changes are natural and inevitable as losing baby teeth and maturing. Advance word from the still unseen For Heaven’s Sake! suggests a greater dramatic intent, since the onstage Kilgannon family is dealing with weightier matter along the life/love/death spectrum.

Stressful onstage struggles with faith may not seem native to the accepting, serene, and reasoned nature of Buddhism. Perhaps the labor toward birthing one’s personal peace is something entirely different. In 10 Days to Happiness author Donna Rae Davidson diaries her own first steps eastward and away from non-Western religion. Searching for inner peace, Davidson enrolled at vipassana, a Buddhist retreat emphasizing individual humility through surrender of earthly pleasures. Deprived of talking, reading, writing, and even eye contact, Davidson quips that vipassana translates as “a Buddhist concentration camp for gentiles.”

Arriving at the retreat, she is chagrined to find a rulebook as seemingly restrictive as any in the outside world. “Rule number one,” she reads, “no killing of any being, not even bugs of which there are a gajillion.” Mary Kate O’Connell is Davidson’s onstage doppelganger in this Curtain Up! offering from O’Connell and Company.

In February 2016 Ujima Company will revive its staging of El Hajj Malik, N. R. Davidson’s 1971 poetic script. On the surface a biography of Malcolm Little, better known as Malcolm X, this show was a staple of the Ujima’s repertoire during its founding years in the early 1980s, demonstrating an energized ensemble aesthetic trademark to the company’s work at that time.

The formative moments in the man’s life are recounted in vivid rhyme. Essentially orphaned from his Midwestern Baptist family, he was a street thug in Boston until maturing through Islam as well as his spiritual, intellectual, and political enlightenment. Remarkably, the production manages to hint what the life might have held for Malcolm were he not assassinated at age 39. Deft inclusion in the play of the eulogy Ossie Davis wrote and read at Malcolm’s funeral adds resonance to the evening.

El Hajj Malik is a rap epic written before rap was rap. It is also a very American story of a character who is redeemed by his progress to find balance through faith.

Religion, of course, is not the only topic of conflict playing a leading role this season. The Arthur Miller juggernaut in Buffalo continues into its third consecutive season with Irish Classical Theatre’s presentation of All My Sons and a slate of other plays about living up to American values and the American dream; these include Of Mice and Men at the New Phoenix and two productions at Kavinoky which herald the coming election year, Both Your Houses and Conversation City.

Conflicts of humanity and morality will be explored. Two examples are The Guns of Christmas (Subversive Theatre Collective) and Judgment at Nuremburg (Subversive with Phoenix).

And at every theater, the ever-popular theme of love will hold center stage. This would be inclusive of hetero, homo, and marital varieties. Romantics and non- can consider any number of comedies, dramas, and hybrids. Bring a date.

And check listings for details. Especially for additions to the season roster. Keep the faith.