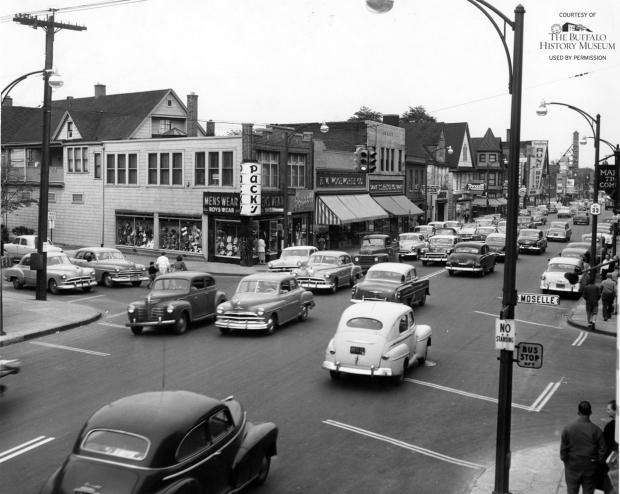 Genesee Street, around the corner of Moselle Street, was once a vibrant center of neighborhood life. In this image, taken by an unknown photographer in 1954, 19 businesses are visible along a three-block stretch on the north side of Genesee Street from Moselle Street to Nevada Avenue. Visible, from left to right, are Pack’s men’s wear, F. W. Woolworth Co., Kresge’s five and dime, Sandy’s hardware, Singer Sewing Machine Co., Berg’s drug store, Weinberg’s men’s wear, Rung Bros. furniture, and the Home Store, among others. In the distance, the giant blade sign is visible for Basil’s Genesee Theatre, a 2,000-seat movie house at 1600 Genesee Street that, according to a Buffalo Times account of its 1927 opening, “rivaled in size and beauty many of the downtown playhouses.” The sign reportedly contained 4,000 electric lights.

The scene today is a stark contrast. From 1950 to 2010, the neighborhood lost 68 percent of its population and about half its buildings, while this neighborhood center along Genesee Street has lost nearly all vitality and sense of place. Traffic engineers might call this scene a success—the expressways have succeeded in solving the traffic congestion problem on Genesee Street. Commuter traffic no longer clogs this artery, and shops which took advantage of this traffic are gone, too. Today, only six buildings in this image still exist, surrounded by vast stretches of empty land.