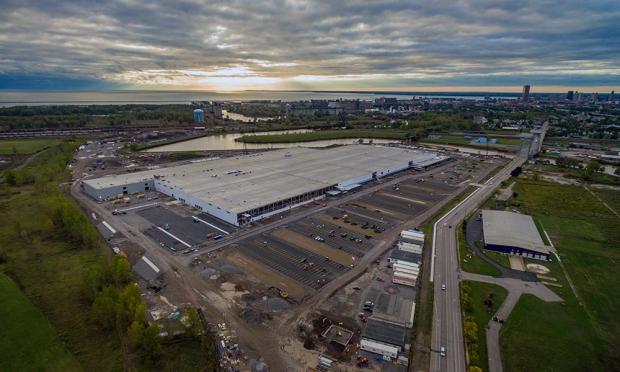 Photo courtesy of Stonebridge Iron, a contractor on the Riverbend SolarCity plant.
by
Bruce Fisher
/ Sep. 6, 2017 12am EST

Last week, the news came in an Associated Press wire service story that was circulated globally, and only incidentally here: the news that production of next-generation solar roofing tiles is now happening in Buffalo.

This means that Andrew Cuomo can run for president of the United States in 2020. Cuomo has used the power of his office to bring next-generation capitalism to an icon of Rust Belt decline. He did it by embracing a growing enterprise with a greater market capitalization than General Motors, outmaneuvering grasping and mendacious locals, and by choosing, either by good luck or by good intelligence, a long-run winner.

Cuomo didn’t follow the development paradigm of Republican governors in Alabama, Mississippi, and Indiana, who have all fed German automobile makers and American defense contractors billions in subsidies and prayed for a return. Instead, Cuomo bought his taxpayers a state-owned factory and leased it to a technology company that is supplying something entirely new: roofing that creates power from light, plus lighting that uses that power, batteries that store that power, and a connection to a fast-growing electric car company. Tesla pre-sold over 400,000 of its Model 3 cars. The roof tiles being made here are pre-sold through 2018.

Like Jerry Brown’s California, and unlike the handout states, New York under Cuomo has used intellectual capital, energy regulation, and, it seems, some elite social networking that connects Wall Street to personalities who are rich enough, bright enough, and ambitious enough to think far beyond the Buffalo River. Rather than pumping American money into Germany (the German state of Niedersachsen owns 20 percent of Volkswagen), Cuomo adapted the German model of stakeholder. Smart.

Just in time, too

Sadly, our new analysis of the current state of the regional economy shows, again, that the FIRE sector—finance and real estate—continues to overshadow. That’s not good, because churning the stock of buildings here, with locals selling to the shrinking number of locals, mainly helps the dealers, brokers, financiers, and other agents who don’t create local wealth so much as shunt it around.

Some Buffalo real estate is hot right now, as speculators bound in. There are studies out there, especially a recent one by the Brookings Institution, that argue that the great American re-urbanization has stalled because prices have grown too high; the City of Buffalo continues to shrink, notwithstanding all the apparent (and real) improvement. But prices per se are not the barrier to re-urbanization here: The cruel dynamics of engineered abandonment, convenient racism, and heavily-subsidized suburban sprawl are at work. Buffalo’s real estate was worth 17.5 percent of the total Erie County taxable value of in 2010. The latest figures: Buffalo’s overall value has dropped to 16 percent, just $6.6 billion out of the total $40.2 billion, as a share of the Erie County whole. The sprawl machine continues; somewhere between 16,000 and 23,000 of Buffalo’s 93,000 parcels are vacant, while suburban housing construction continues to march ahead—for a declining regional population.

One reason why the race for mayor of Buffalo is a yawn is because none of the candidates have a thing to say about this.

Without the Riverbend project, Buffalo would be left to its current developer- and banker-driven “renaissance,” in which fees for bankers, lawyers, and insurers, and profits for real-estate speculators, derive from the endless supply of subsidies for showy downtown projects and quiet, relentless suburbanization—all supported by a political class that couldn’t care less that the area’s population is growing older, smaller, and poorer.

New figures from the Bureau of Economic Analysis show this: Between 2010 and 2015, as this country slowly recovered from the Great Recession, finance and real estate accounted for less than 15 percent of national economic growth—but over 60 percent of growth here. Manufacturing grew over five percent nationally, but in Buffalo shrunk overall, both in absolute and in relative impact. The total dollar-value of manufacturing in Buffalo fell by almost 15 percent since 2007, the last year before the financial crisis and the resulting Great Recession. Manufacturing was worth $8.6 billion in constant, inflation-adjusted dollars in 2007. In 2015, it was worth $7.3 billion. FIRE went from $6.5 billion to $9.1 billion. The overall economy here grew from $46.2 to $50 billion. Thus the growth in the FIRE sector—which doesn’t sell anything to anybody outside this region—was responsible for 70 percent of every new dollar here.

That sector doesn’t employ very many people, but it has an outsize impact here—and in Rochester and Syracuse, too, where overall growth since 2010 has been anemic (less than one percent), but get this: The drop-off in goods-making private industry in Rochester has been so great that, had it not been for financial services and real estate, there would have been no growth whatsoever. In Syracuse, almost ditto: 90 percent of the growth since 2007 has been from FIRE.

Except in Detroit, where the automobile industry has been re-consolidating since Obama’s bailout of GM, that’s the pattern in other big Rust Belt towns. In Cleveland and Milwaukee, manufacturing in 2015 had dropped below what it was in 2007, despite modest recovery after the Great Recession. In Cleveland, FIRE was over 60 percent of growth; in Milwaukee, 77 percent. Only in Pittsburgh, where there are a couple of hundred new startups thanks to the long-running entrepreneurship stewardship program there, has a drop in manufacturing not been matched by frothy frenzy in finance and real estate.

Here’s the reality check: Where Rust Belt real estate steams ahead, Rust Belt populations are stagnant or declining. The sprawl machine of which I complain so bitterly in Buffalo is at work in every Rust Belt city. Every goddamned one.

And then there’s the other appearance of growth—the ever-increasing supply of destinations for consumer spending, especially restaurants, hotels, and amusements. One reads with head-scratching wonder the many accounts of Rust Belt chefs creating lovely new offerings in lovely refurbished downtown spaces, and the puzzling yields more questions than answers: Could it be that the Rust Belt has become a very much nicer place for the top 10 percent or so, even as the bottom 90 percent sees the last of its high-paying work disappear, its rents rise, and the minimum wage emerge as the income ceiling for anybody just getting into the workforce?

At a recent two-day Cornell University conference here, dubbed “Buffalo Since the Recession,” many of the scholars and analysts made the same case: Economic recovery in Buffalo is real and measurable, and some bright days are ahead of us. Wages for new workers are creeping up toward (not yet reaching) the goal of a living wage for a family with children—a change which is due to Cuomo’s labor policy, less an ideology-driven change than a bow to arithmetic, but still, effective already.

Other good news: Though rents are rising and some individual neighborhoods (like the Fruit Belt) are experiencing stress from speculators, there are vast swaths of Buffalo and of the first-ring suburbs where prices aren’t spiking or even rising much. The median price of a single-family home in the Buffalo area is less than twice the median household income—unlike in big cities, where the price of a house is often 10 times annual income. A family making less than the Buffalo median income of about $50,000 can afford a Buffalo-area house.

But as our recent peeks at IRS data show, two-thirds of Buffalo taxpayers report incomes below that $50,000 level. The world for the majority here is quite different than the life experience of the top 50,000 income-tax return filers here, people who report over $100,000 in annual income. Those 50,000 are the happy beneficiaries of the new consumer amenities of the recovery: Their restaurant options are great, their houses are rising in value, and, thanks to Elon Musk, their aspirational vehicle purchases may now include an electric car using Buffalo components.

So let’s count our blessings. Happy us, for having a new shot at a “tradable sector” to overtake FIRE—and for having a government functional enough to use our money to get us there rather than to subsidize Germans.

The question remaining for Cuomo is not his to answer, but Tesla’s, and it’s the question that only one of the candidates for mayor of Buffalo is asking: Will the new Riverbend plant pay anything like the wages that the General Motors plant on River Road pays, or is the most that Buffalo’s new manufacturing workforce can hope for is Cuomo’s new $15-an-hour minimum wage, which won’t be in full force for a couple of years yet? Legislator Betty Jean Grant wants to know; the other mayoral candidates haven’t asked.

But the office mayor of Buffalo isn’t relevant to much of this discussion, until and unless a mayor of Buffalo challenges the way that the FIRE economy here works. So far, mayors and other local elected officials have been content to watch the FIRE sector grow—a sector that is all about trading inside the region’s boundaries, at the expense of the region’s core. Cuomo hasn’t changed that dynamic, even as he tries, with Elon Musk’s help, to change the trajectory of Buffalo from a once-was to a now-is manufacturing center.