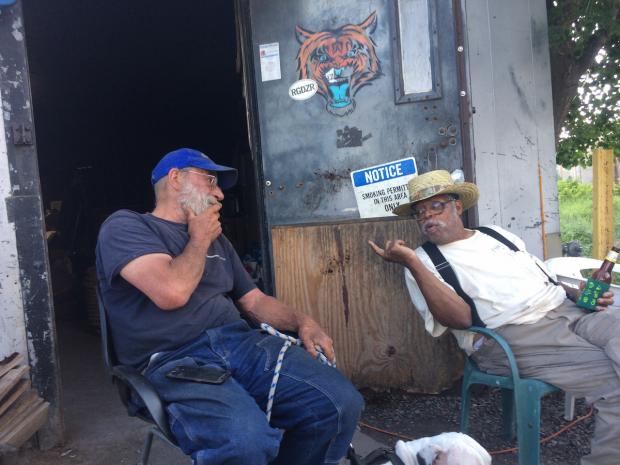 In what might  first appear to be an isolated outpost on a demilitarized zone, minus the .60 caliber and sandbags, we pull up to a dusty halt. As we begin to unload our grilling gear, we scan the scene—a wide open, grassy gravel plain ringed by long-dormant towering grain elevators. A dog barks. We squint in the frying-pan heat of early afternoon of this bleakly silent, spooky place. Suddenly, a percussive echo fills our ears. Waves of syncopated patterns bulge out of cloistered hollows. The towers act as huge, pulsing amplifiers as the sound breaks over us and the gravel beneath our feet rattles. We stare at each other in mute fascination.Then, silence abruptly returns as two gaunt, bearded figures emerge from the dark, mouth-like door of the far tower carrying drum cases and recording equipment back to their vehicles.

We return to setting up the grill. The placement of the bed of charcoal is a fine point in barbeque and a distinctively individual choice between these two gentle grill masters: Kenn “Pops” Morgan and “Swannie” Jim Watkins. We have been invited to this secret preliminary bout of a time-honored competition in the grilling of porcine flesh. Swannie Jim appears and greets us. Deeply tanned and indeterminate in years, he wears the clothes of a working machinist, specked with oil and grime. Long-bearded and a Camel smoker, he is the designated steward, caretaker, and security guard of this grain mill park known to the cultural community as Silo City. Sited at the curving of Buffalo’s Ships Canal, it lies at the edge of a decaying factory landscape, gradually returning to a jungle-like state with weeds and thickets growing up over giant plastic tubs and rusting cables—even over the cinderblock machine shop that Jim calls home.

Jim has fired up his chimney-throated grilling barrel before we arrive. It shimmers in the growing heat of this secret feasting Father’s Day. Kenn’s grill is brand new and cobalt blue, bought special to inaugurate the grilling season. Kenn is superstitious and wears his grilling pants—now elephantine due to post heart surgery weight loss—held up by thick suspenders. His ancient khaki shirt is dominated by a well-worn chest pocket nesting his archival notepad.

Somehow, the secret, very privileged, “hush hush” barbeque cookout has been leaked to others in the meat-hungry cognoscente. Kenn rolls his eyes and shakes his head. He tends his grill with sidelong glances across the yard at his chainsmoking competition. Clutching his PBR lovingly held in a fraying beer cozy, Kenn’s casual air belies growing consternation. His charcoal bed is still too hot for the meat. The special marinade in its masking-taped pot must wait until the grill heat is reduced and footlong lengths of rib meat are placed on the gleaming tines. This seasoned griller muses furtively as he hovers over the grill, hoping to bring down “the burn.” He closes the lid and opens another beer, sticks it in the cozy.

Swannie Jim’s grill lid is held down with a cinder block and seems almost invisible behind the growing crowd of guests now deploying chairs, a round of eager eaters drinking their various beers. Jim sits back in his lawn chair, smoking and chatting, unfazed by the competitive scene, where memories of grilled meat eating are pursed on all lips. He is content to underplay his grilling celebrity, while Kenn gives a solemn, sacred anointment to the meat and greet.

The pile of empties will mount as we move further into the shade of Jim’s hut. More folks arrive—curious bike riders and kayakers. By late afternoon, the cases of beer, the sides of salad, chips and dips have been nearly depleted—the graze-by of snacks on the folding tables is left to crumbs. The last arrivals have plucked the few remaining sunbleached chairs from the overgrown patch of vines, trying to reclaim every vestige of human industry.

At last, Kenn’s grill burn has been deemed satisfactory. He tips back his new straw hat. The meat is placed. The secreti rub with its well-aged baster is released from its taped pot and expertly dabbed so that each granular deposit of sauce catches the glistening heat of the glowing coals. We stroll to the river as we wait—paddleboarders and kayaks glide by. A lemonade-like stand perches at the edge of the clean, sandy patch leading to a sunblazed aluminum dock. A zinc-nosed girl in far too few clothes for having no umbrella stands at her post renting sun-fun accessories. The kids are restless. The adults move their chairs closer together. They play with Jim’s pit bull, Gonzo, who is leashed and barking up the dust as cars of the curious turn 180s in the gravel road, trying to get a look at the scene.

We wait no more! The gossamer deliverance of meat appears ready to eat. The glorious center of gustatorial awe is brought out in two aluminum gunboats and placed securely on the white plastic tables before the gaping guests. Kenn’s sizzles in sliced quadrants of spicy mahogany brown—the bones glisten in the redolent sauce. It meets the teeth with a promising kiss of succulent satisfaction, deliciously sticking to thumbs and forefingers.

Swannie Jim’s last cigarette is stamped into the earth. He sits leaning forward now and stares out at the munching, sweaty throng, each settled back with their chosen morsel. Sweet and hot finger-length cuts glisten with a deep rust finish, spiced with Jim’s famous Carolina mustard—a savor-oozing moist with no grease. The meat melts at the touch of the trembling teeth. The buzz of conversation has long died down, but the line of the hungry twice surges to the grillers’ table, returning to their seats with a sigh or occasional guttural hum. A contemplative aura settles over the now-late sun-dappled scene. The grills are cooling. Children strain on tiptoe to reach the the near-empty pork rib pans to wipe them clean with spoons and fingers. There is satiation all around, but before everyone stumbles back to their vehicles, Jim and Kenn nod at each other, rise and call for the vote. A child is sent forth with a bowl of paper squares and a handful of merch-branded ballpoint pens. We assemble in our sated bliss to mark a “1” or a “2,”our choice of competing grillers meet. It is a seriously meditative task as each “barbequeist” is a consummate artist of carnivore cuisine. The voted is totaled—Swannie Jim wins.

There are still a few beers in the machine shop frig. It is down to we last five—Jim and Kenn, shaking hands, have moved to consensus and relocated their chairs for the post-mortem. At long last, in leisure, the fine points of this grilling expedition are discussed with relaxed expertise. Once cold, we pack up the baptismal grill and folding tables. We toss our empties on the singular stack of mounting beer cans, shake hands, and look forward to be announcement of the formal rematch later this summer. Swannie Jim and Gonzo stand silhouetted in the cast shadows of the grain elevator as we drive back down the dusty access road, back into real time.

The first 25 arrivals get “taste tickets” for a free drawing—only five winners to be drawn at the event will be tasters and judges of the winning ribs. Feel free, however, to bring your own meat and challenge the grill masters, Watkins and Morgan. There will be color prints of artisit John Farallo’s Grill Masters Dream for sale. Silo City’s new restaurant, Duende, will also be open. Bring your own chair, beverages, and sides.