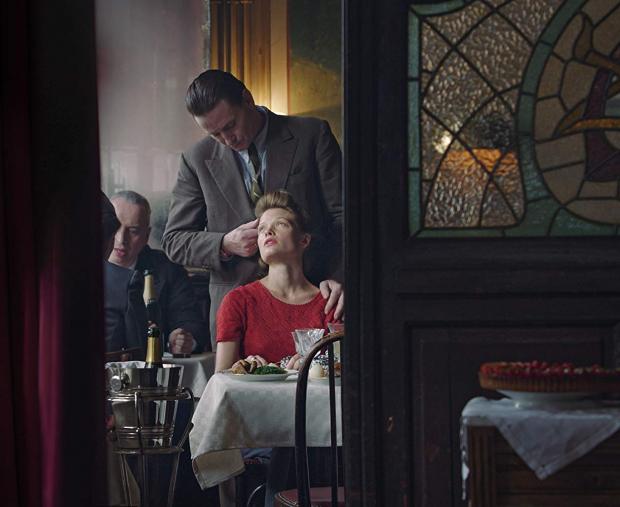 In 1985, the French writer and filmmaker Marguerite Duras published La Douleur (Pain), a hybrid fictional autobiography about her experiences under the Nazi occupation during World War II. She said that the work was adapted from diaries she wrote at that time that which she could not remember writing, though she recognized the places and events in them. Reading them when she rediscovered them, she said, brought “A phenomenal chaos of thought and feeling…that I dare not amend.”

Should we believe that? Perhaps, though it’s just as likely that Duras, whose work often sought to erase traditional ideas about identity and memory, created it as an excuse to blur the lines about “facts” in order to arrive at a greater truth about human experience under traumatic circumstances.

Given that objective, Emmanuel Finkiel’s film adapted from a portion of her book, Memoir of War, is close to a masterpiece.

Mélanie Thierry plays the author, identified only by her first name, in 1944 and 1945. She held an office job with the Vichy government while working with the French Resistance along with her husband, the writer Robert Antelme, who was arrested and sent to Buchenwald.

The first section of the film deals with Marguerite’s attempts to get information about her husband’s location and condition. This leads her to Rabier (Benoit Magimel), a highly placed collaborator and self-defined aesthete. Impressed by the fact that she has already begun to develop a literary reputation, he tries to place himself as her benefactor, offering vague but hopeful information about Antelme during regular meetings.

After the Nazis retreat from Paris and it becomes clear that they will lose the war, Marguerite is left to the agonizing task of waiting. She torments herself with reports of prisoners slaughtered en masse well as the potentially worse things Antelme might be suffering if he is still alive.

Even though the second half of the film is nearly plotless, it is the most gripping. Thierry’s stoic performance and Finkiel’s evocation of atmosphere envelop the viewer in a fever dream of dread. Compounding this is the ambiguous nature of Marguerite’s relation to her husband—there are none of the expected flashbacks to happier times, and it is possible that her fear is comprised partly of guilt, whether for the miscarriage of their only child or her infidelity.

For contrast, a more conventional and intensely moving portrait of a grieving mother is provided by Shulamit Adar as Mrs. Katz, a Jewish neighbor whose crippled daughter was taken by the Nazis.

My one reservation about the movie, that some aspects are less ambiguous than merely confusing, may be due to the fact that I watched it on a streaming link: I would expect subtle details to be clearer on the big screen. With its lack of music helping create an oppressive atmosphere, Memoir of War at its best reminded me of two other great French films about women going mad, Polanski’s Repulsion and Truffaut’s The Story of Adele H. It opens this week at the North Park theater, where it will share the screen with a return booking of Mark Sopano’s documentary Sicily: Land of Love and Strife.