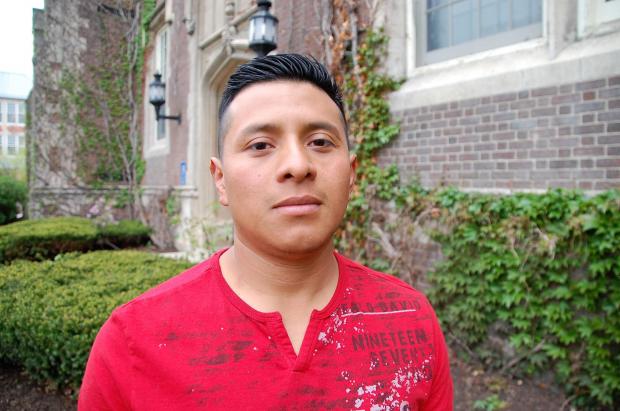 Last week, a Genesee County dairy worker and organizer within the movement to extend state-issued driver licenses to non-citizens was arrested for driving without a license and subsequently handed over to Border Patrol and detained in the Buffalo Federal Detention Center in Batavia, New York.

The irony of Cardona’s arrest has sent ripples throughout his community, and through the community of organizers and activists statewide who have been rallying state government for years to follow the lead of 12 other states that don’t require citizenship for driver licenses. “This is a Rosa Parks moment,” Buffalo-based organizer Jennifer Connor wrote in an email to supporters. “Freedom of movement is a right that everyone should have.”

“Our daughter misses her daddy, she is crying because she hasn’t seen him,” Cardona’s wife was quoted saying in a press release. “She doesn’t understand what is happening. She thinks her father went to the store to go buy her birthday cake. So she keeps asking why he isn’t back yet.”

A native of Guatemala, Cardona has been living with family in the United States for 10 years. He helped to start Alianza Agricola, a coalition of migrant dairy and other agricultural workers that has formed to seek basic rights. Cardona visited Buffalo earlier in the year to attend an advocacy event at a local bookstore.

The day of his arrest, Cardona left home to gather supplies for his daughter’s third birthday, according to his supporters. Cardona was detained after being pulled over in Attica on August 30 in what Carly Fox of the Workers Justice Center of New York described to The Public as a speed trap. Under Trump-era immigration policies, there is no path to close such offenses administratively. The immigration system and its resources are now focused on deportations, Fox said.

In a 2017 New York Times article, the work of Cardona and the work of the Green Light NY: Driving Together initiative is highlighted. Cardona told the Times of an occasion when he drove a car to get medication for his infant daughter who had developed a fever. “I know we are in another country that is not our own, and I don’t like breaking the law,” he told the Times through an interpreter. “But when it comes to my family, I have to take risks.”

Supporters and friends came up with $10,000 to bail out Cardona on Tuesday. “The community came together,” Fox told The Public. “People really care about him and his family.”  A GoFundMe to support his family has raised over $5,000 in five days, but his friends and supporters say more is needed for upcoming legal fees.

In the aftermath of Cardona’s arrest, organizers trained their sights on Governor Andrew Cuomo, an outspoken critic of President Donald Trump’s immigration policies, to put his pen where his mouth is.

“Today I want to raise my voice on behalf of all workers who are in the shadows and not recognized despite our role as the backbone of agriculture in New York,” Luis Jimenez, an Alianza Agricola member, said. “I want to ask Governor Cuomo, who so many times has said that he wants to protect the immigrants, that at this moment establish state policies that are just and that protect the immigrant. We are angry and feel betrayed by him because he has done nothing to help keep our families together. I ask that you recognize our rights and make this state, a state of immigrants where the Statue of Liberty is, a place where we are granted the same freedoms as others.”

A bill, co-sponsored by Buffalo Assemblywoman Crystal Peoples-Stokes to change the state’s law is currently stalled in the Assembly, with a path to approval blocked by a state Senate that is narrowly controlled by a Republican majority that doesn’t favor such legislation. In 2002, then-Governor Pataki enacted the current requirement of a Social Security number to receive a driver license into law. “We are pushing for Cuomo to take action immediately,” Fox said.

Supporters of the legislation point to the economic benefit beyond the human one that such a bill would usher in. Based on estimated figures on the number of non-citizen New Yorkers, the bill would garner $57 million annually for public coffers in the form of registration fees, sales, and gas taxes. The move would also bolster public transportation funds, lower car insurance costs statewide as more drivers sign up for policies, and stabilize the state’s agriculture.

Cardona and his supporters are currently working on assembling a defense in upcoming Immigration Court proceedings, which will take place in either Buffalo or Batavia.