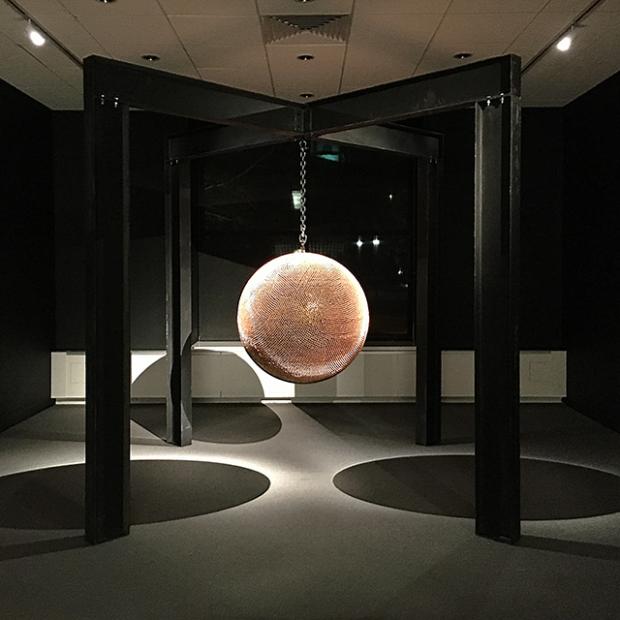 In a time of madness—when just about anybody can possess an assault rifle of the type that has been used again and again in mass murders of schoolchildren, and conspiracy purveyors with large audiences on the internet aver such tragic events never happened, but that the murdered schoolkids’ deaths were faked somehow—the Burchfield Penney gallery has a counter-current exhibit called Enough Killing!

The most intriguing work in the show is by the collaborative artist team of Craig Smith and Colin Beatty. It involves an authentic Glock nine-millimeter-caliber handgun, or component part of one. Intriguing in its conceptual complexity and due to the core ambivalence quality of the work. As to just what the artists are trying to say or do with the work. Or for that matter what side they are on in the rancorous controversy about the flood tide of guns in the nation—arguably related to the high number of mass murders, but also of killings that might not have happened except that there was a situation and a gun was handy and somebody decided to use it, and gun accidents, and gun suicides.

The Smith and Beatty exhibit consists of a little hard plastic Glock carrying case and one of the 33 total component parts of a Glock, if you completely disassembled one. What the team has done is just that—disassembled one—and mailed the 33 parts, one each, to 33 different now share holders in the artistic project, and part owners of the Glock (thinking of the number of share holders plus originating artists now as a kind of corporate entity, of which the originating artists would constitute something like board of directors). With instructions to the share holders that at some point they will be requested to return their Glock part back to the originating artists for reassembly of the gun into functioning condition. Or not. “It is the discretion of each share holder to determine if the corporate objective—gun reassembly—is aligned with their own. And it is a collective response that is required for all parts to be returned in order to produce a fully functioning handgun.”

Polls by various national polling organizations using various survey methods—telephone interviews and interrogations, fill out and hand in or mail in forms—show significant majorities of citizens and voters want gun regulation and control versus the preposterous status quo. But somehow they don’t get that. The Smith and Beatty project constitutes a different kind of poll, one that requires a more actual, tangible response than merely answering phone questions or filling out forms. Not sending back your gun part equates to one less gun in the world.

The Smith and Beatty project materials are now part of the Burchfield Penney collection and holdings. They were previously owned by local artists Gary Nickard and Patty Wallace, who donated the materials to the gallery. But not likely the Burchfield Penney will be sending the gun part back to Smith and Beatty to reassemble into a functional gun. (Which probably won’t bother the Glock people, who are basically only interested in making and selling guns—maybe now they can make and sell one more. Or the NRA, which seems basically only interested—despite propaganda about other more creditable objectives—in keeping the gun manufacturers that support them productive and happy.)

Among other works in the exhibit, two by Nickard are Ireland photos—one about more or less recent events in the North euphemistically called “The Troubles,” overlain with a poem by Paul Muldoon, another of a bent-over peat-digger, overlain with a poem by Seamus Heaney—and a painting by Wallace that in the context of the exhibit seems to be saying that intra-species conflict is a universal, every species fights and kills its own (though surely not as readily and casually as the human species). Also, Kathie Simonds’s American Classic: Our Holy Wars, a parody of Grant Wood’s famous American Gothic, with reference to the shameful Mexican War (not much on that war in the kids’ history books). Nancy Dwyer’s patriotism skepticism depiction of a version of the American flag with stencil cutout legend “Out Of My Mind.” A Roycroft shops printed and framed sententious claptrap aphoristic item by Elbert Hubbard. A quasi-full-scale wood and plaster guillotine by Rich Tomasello. And accessories, such as a meat counter take-a-number dispenser. Be patient. You’ll have your turn.

And the exhibit centerpiece, an enormous globe of actual copper and brass bullets, suspended from a steel girders framework, entitled Death Star, by Robert Longo. Exhibits flow into one another. A recently concluded but still memorable Burchfield Penney exhibit of writings and photos of poets and photographers Thomas Merton and Robert Lax included a prose poem by Merton on the creation and deployment of the atomic bomb detonated on the city of Hiroshima, August 6, 1945. The Longo work is reminiscent of nothing so much as the spherical prototype atomic bomb detonated at the Trinity site in the New Mexico desert, July 16, 1945, three weeks before the Hiroshima devastation.