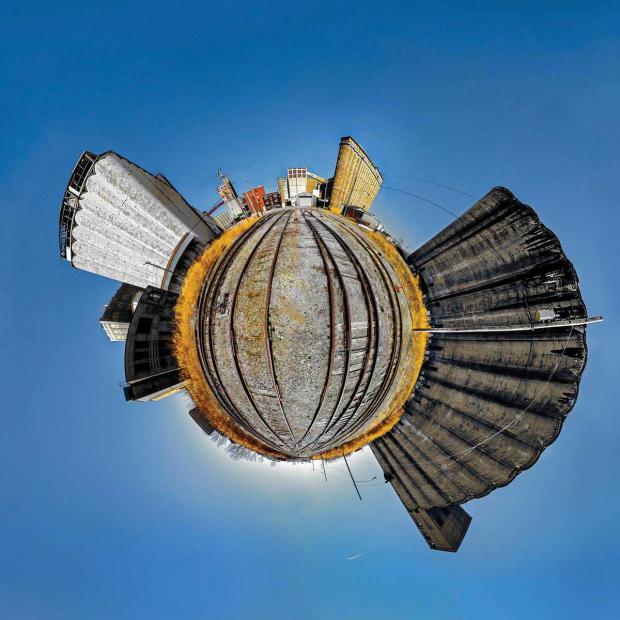 The first sentence of Gene Witkowski’s short form “bio” accompanying his recent works current exhibit at Betty’s Restaurant states that he is “a self-taught photographer and amateur astronomer.”

The astronomy predilection helps explain the title of the show—and way of thinking about the rather odd-looking photos—as “Little Planets.” Photos in the round, as it were. Three-hundred-and-sixty-degree panorama views of local region scenes and features—architecture and artifacts and landscape—around a central circular area that can look more like a sphere than a circle. Views created by an elaborate sequence of in-camera photographic and in-studio editing processes.

A possibly more timely pertinent astronomy reference would be to the solar eclipse. The fringe of imagery of note in the photos—the architecture and artifacts and landscape—radiating outward from around the less conspicuous central circular area—recalls the stunning images of the total and near-total recent eclipse, described variously as “ring of fire,” or “diamond ring effect,” or “Baily’s beads.”

Or in some cases radiating inward. Centripetal versus centrifugal. In these cases, the sky is at the center of the photo, whereas in the radiating outward examples, the center is a portion of earth. Or water, or ice, in some waterfront scenario photos.

Witkowski the photographer has been previously best known for his waterfront industrial photos, including documentation of the final work assignment of the last of the “scoopers,” who unloaded grain from lake ships before that job was eliminated by automation. He retains his attraction to waterfront industry, however. Several of the current works feature looming grain elevator silos and dock apparatus—cranes and the like—but it would take a waterfront denizen of many years standing to positively identify most of the subject matter, given the skewed perspectives and radial distortions of the process. Which are part of the appeal of these photos. Part of the fun is the puzzle.

An equal or greater part is the sheer beauty of the photos. Two of the most beautiful are of the same subject, the Henry Hobson Richardson building and environs on Forest Avenue. Winter scenes in both cases. One radiating inward—gothic towers and gothic trees looming from opposite sides of a circular arena, vying for prominence against a turbulent gray sky threatening storm—and one radiating out—the Richardson towers building clearly dominant in this one, atop what looks like an enormous snowy pearl.

Winter settings help. Snow cover erasing what otherwise might be an overload of visual information, particularly in the industrial environments. One conundrum photo shows curved lines of railroad tracks and trackside dried grasses poking through snow cover, all in all as if embracing a distant prospect of grain elevators and associated structures. A little bit like looking through a telescope from the wrong end. Witkowski calls it a magnetic fields effect.

In his artist’s statement, he briefly explains his process. Using a wide-angle lens and the camera aimed at the horizon, turning in a circle, he takes about 35 pictures that are then overlapped and manipulated in Photoshop to achieve a single picture wrapped in a circle, and seamless, and just the way he wants it, earth in the middle and sky outside the main subject matter ring, or vice-versa.