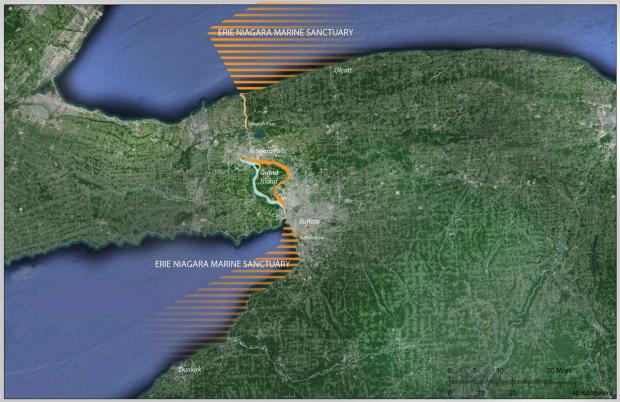 Imagine, Lake Erie, the whole of the Niagara River, and parts of Lake Ontario as a new NOAA (National Oceanographic and Atmospheric Administration) Marine Sanctuary?

During the past 12 months local organizations have been meeting with representatives of NOAA, and other local, state, and federal officials about the potential to designate this area as a National Marine Sanctuary.

NOAA Marine Sanctuaries are dedicated to preserving, protecting, and promoting nature, biodiversity, and cultural heritage. Imagine this water based and offshore sanctuary that focuses on ecosystem protection, fish, bird and other wildlife habitat, native aquatics, cultural heritage, recreation, education, research, and the kind of economic development that would anchor the WNY region in a vitality and resurgence that would create wealth for a broad population for generations to come. This would anchor a real “Blue Economy.”

Marine Sanctuaries are tools that promote solid local economic development and conservation, biodiversity, and heritage. What a concept! They promote a commons that involves ownership and sharing of resources by many parties, like you and me and not just a few interests that have only short term economic exploitation at their heart.

The proposed Erie Niagara Marine Sanctuary has historic world-class biodiversity and is located in a place where the human history of North America and Turtle Island since at least when the ice left, through to the present day is writ large.

The Niagara River strait is also the location of the Niagara River Corridor “globally significant” Important Bird Area that is recognized internationally as a critical habitat for migrating and breeding birds and the ecosystem that supports them. The diversity of fish and wildlife and historic sites both underwater and on shore are incredible assets that we can protect and build local economies around.  First Nations people live, work, and depend on this corridor. The urban cities of Dunkirk, Buffalo, Niagara Falls, Grand Island, Lewiston, and Olcott all sit on the shores of the proposed Erie Niagara National Marine Sanctuary. The designation will enhance opportunities for visitors, students, researchers and scientists, and ecotourists alike to visit and work. If done correctly, this could mean jobs and a resilient and reliable future for local economies.

NOAA, the federal government agency that oversees the National Marine Sanctuary program has a network of 14 Marine Sanctuaries encompassing more than 170,000 square miles of ocean and Great Lakes waters. These include the Papahānaumokuākea Marine National Monument in Hawaii, American Samoa, and other locations from Washington State to the Florida Keys. Some of these sanctuaries are dedicated to biodiversity and natural ecological conservation, and others are designated principally as areas designed to conserve heritage resources including cultural and historic artifacts such as shipwrecks. 13 of the NOAA Marine Sanctuary sites are ocean based. There is only one currently in the Great Lakes, located at Thunder Bay on Lake Huron. This is primarily a “heritage” sanctuary.

Earlier this week,  PBS and local affiliate WNED ran a four part live series “Big Blue Live” based on the Monterey Bay Marine Sanctuary off the coast of California. According to numerous sources that series has and will continue to bring global attention and an economic boost to the area.  According to the Monterey Herald, the production  has brought huge attention and an economic boost to that region.

The proposed area encompassed by the proposed Erie Niagara National Marine Sanctuary has biodiversity contexts that compare with places such as Yellowstone, Monterey Bay, the Everglades, and the Florida Keys. In addition, our human and cultural heritage including submerged shipwrecks and a wide variety of shoreline and watershed based sites helps to tell the whole history of North America since the ice left 12,000 years ago. Did we mention Niagara Falls?

Until recently the path to a NOAA marine sanctuary had to come through a nomination by a federal elected representative. For a variety of reasons, in 2001-2003, local marine sanctuary supporters were unable to get a federal representative to make the nomination. Last summer NOAA announced that they have a new policy regards nominations. We are currently discussing this with some of our local officials and the idea has generated some enthusiasm.

The new NOAA policy is that they will accept nominations through a community based nomination process. Now we have an active and engaged process that is coming directly from the community. This does not mean that we are bypassing elected officials and other government representatives. Far from it. We are working with many interests inside and outside of government channels and are developing a wide body of support. Organizers are especially pleased that Congressman Brian Higgin’s office is taking a serious look at this proposal.

The Western New York Environmental Alliance (WNYEA) and the Friends of Times Beach Nature Preserve are  leading the effort to bring this nomination to fruition.

Read more and sign the nomination petition at Friends of the Erie Niagara Marine Sanctuary.

Jay Burney is contributing editor for environment and ecology for The Public and a founder of GreenWatch.