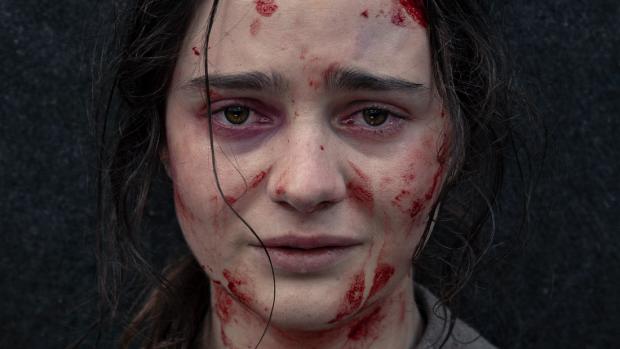 What it is, it’s the return of the Ludovico Technique.

You remember it, from A Clockwork Orange, the scene with Malcolm MacDowell strapped to a chair with his eyelids held open. The idea is that, in order to get Alex to give up his nasty ways, he is forced to watch films of violent atrocities while being injected with a nausea-inducing serum. After the therapy is finished, any violent urges result in him becoming sick to his stomach.

There are filmmakers who seem to believe that the only way to get people to empathize with the fictions of wrongdoing is to present as lurid and disturbing a portrait of evil as possible and then to rub the audience’s collective face in it. Steve McQueen comes immediately to mind, for his depiction of IRA soldier Bobby Sands starving himself to death in a prison cell in Hunger (2008) and of course for 12 Years a Slave (2013), in which he hopes to persuade us that slavery was bad. I suppose there are people (because, as we have learned only too well in recent years, there are all kinds) who will argue that slavery as practiced in the United States was good, and that all those forcibly imported Africans were happy to be here where they were well treated. THey might well have learned something from watching 12 Years a Slave. But you know what? I’ll bet you none of them went to see it.

And now we have the Australian director Jennifer Kent, who several years ago made a pretty decent scary movie, The Babadook. With her latest, The Nightingale, she wants to demonstrate the evils of colonialism as it was practiced in her native country. Her vehicle for this is a revenge tale set in 1825 in which Claire (Aisling Franciosi), an Irish convict indentured to a British officer in Tasmania, stalks him through the wilderness seeking vengeance for an atrocity he committed against her family.

Right off the bat, there is nothing I hate watching more than revenge movies. The way the more extreme films of this genre work is to get you so riled up by the evil deeds of a character that you applaud the moment when the hero takes him down—usually in a way that is just as violent. In the original Walking Tall (1973), audiences were expected to stand up and cheer when the hero slammed his car into a man. That’s how lynch mobs are formed.

And what is the atrocity in The Nightingale? That I can’t tell you. The film’s distributor asked that reviews not give that away. They also offered this advice:

The Nightingale features potentially triggering acts of sexual violence towards women, violence towards children, and violence motivated by racism. We encourage you to read through the press notes and view the film in its entirety. This film presents complex issues and does not attempt to offer neat solutions to systemic issues of race, misogyny, sexual violence, or classism. While the film’s narrative is fictional, it is inspired by historical events. The film presents the opportunity to open up an honest dialogue about cycles of violence, the repercussions of colonialism, and the value of experiencing challenging, troubling works of art. While art can make viewers uncomfortable, it can also inspire reflection on the importance of empathy for our survival.

I watched The Nightingale as far as the brutal incident. It occurs not at the beginning of the movie but a half hour into it, and while it’s not hard to figure out what it’s going to be, the delay makes that half hour excruciating. I watched part of it and listened to the rest. And then I turned it off.

I understand that in the remainder of the movie (which runs 136 minutes) Claire joins forces with an Aboriginal tracker who has his own grudges against the British. I have no reason to think that the remaining 105 minutes of the movie was going to be any less brutal than the parts I forced myself to watch. Some reviews feel that writer-director Kent makes a valuable contribution to our historical perspective on the colonial occupations. If she does, I’m never going to know it. I am an adult who is intelligent and, I believe, empathetic. The Nightingale treated me like a moral cretin who could only learn through the harshest distillation of human misery. I have better ways to spend my time.

While I have generally enjoyed her work, I never saw Danish director Susanne Bier’s 2006 movie After the Wedding, so I was able to approach the new American remake with no expectations. In fact, I knew absolutely nothing about it when I sat down to watch the screener. Sometimes that’s not a good idea.

The first half hour shows us Isabel (Michelle Williams), an American woman managing an orphanage in India. An American foundation offers the facility a substantial grant, but demands that she travel to Manhattan to discuss it, which she reluctantly does. There, she is puzzled by the seemingly lackadaisical attitude of the prospective donor, Theresa (Julianne Moore), a rich woman more concerned with her daughter’s upcoming wedding, which she invites Isabel to attend.

All of this seems to be developing as a drama about the nature of philanthropy and a life of service versus one of pleasure, which is a bit dry but not without interest. And then the movie turns into a soap opera: it seems (spoiler alert, but trust me, I’m doing you a favor) that Isabel is the actual mother of Theresa’s daughter, with the man (Billy Crudup) who told her he would put the child up for adoption but instead kept her and raised her with Theresa.

There are more melodramatic twists to come, each one dropped at a point at which it can substitute for honest dramatic development. The excellent trio of actors give it their best, but despite what they say it really isn’t possible to make a silk purse out of a sow’s ear. It would have gone down better, though, had the film been honest about what it was up to right from the beginning rather than trying to hide its intentions behind a veneer of social responsibility. On the other hand, if you wish that theaters showed more movies of the type that fill the schedules of the Lifetime and Hallmark channels, this one is for you.