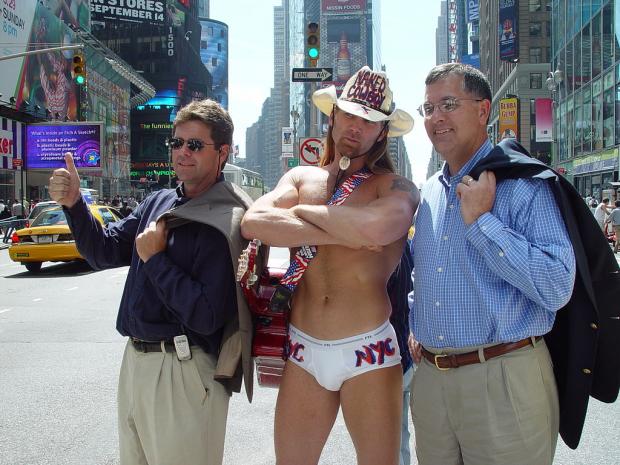 The following article appears courtesy of a content-sharing agreement between The Public and City & State.

Long before a multitude of costumed cartoon characters, superheroes and topless, painted women descended on Times Square, the Naked Cowboy was already an institution in the neighborhood.

Known for wearing only a cowboy hat, cowboy boots and a guitar strategically held over his briefs, he has been making his rounds for over a decade and a half, giving him a firsthand perspective on the recent controversies surrounding Times Square’s street performers.

The Naked Cowboy, whose real name is Robert John Burck, spoke with City & State’s Jon Lentz about the calls to remove him if the topless women are banned, Mayor Bill de Blasio’s suggestion that Times Square’s pedestrian plazas should be removed, and who he’s supporting in the 2016 presidential race.

The following is an edited transcript.

City & State: What’s your take on all the hubbub over the topless women in Times Square?

Naked Cowboy: They’re naked, I’m naked. I have a hard time having a problem with that.

C&S: You recently put on a bra.

NC: Well, when I wore the bra, a lot of people took it as a critique, as if I was telling them to put on a bra. I was really speaking as a colleague, because I know them. I’ve been here for years. I think it’s more about the fact that it’s been a long, hot summer, and as the summer goes on, homelessness, everything, proliferates. October, they’ll all be gone. I know we’ve had a long summer after a long winter, so I think they’re turning it into de Blasio’s policies and everything else as to why there’s all these people here. I think it’s just the heat. As far as the naked girls here, they’re doing exactly what they’ve been doing for three years. They haven’t been that many, and winter comes and they go away.

C&S: Mayor Bill de Blasio has raised the possibility of tearing out the pedestrian plazas in Times Square. Is that a good idea?

NC: I’ve said since day one, I side with the people who tell me what to do, like the Times Square Alliance, people like that, because they monitor and manage and they’re the ones that get all the complaints and what tourists actually want. We all live on tourism here, so if they say to be against it, I’ll be against it. I’ll do whatever they tell me. I also in my heart of hearts don’t think they’ll ever get rid of anybody because it’s liberalism. You can’t do anything about it. Everybody’s got a right. As soon as you start to stop anybody, there’s a hundred people that come to their defense. The poor, the homeless, the needy – that’s what liberalism is all about, take care of everybody. So I don’t think they’ll get rid of them on any grounds. They’re turning into the cowboy can do it, the cowgirl can do it, but it’s really not about the cowboy, it’s about the way they’re approaching people and getting their money and making a lot of people leave with a bad experience. Some charge people more than they expect to pay, and instead of just accepting a gratuity, that’s also a bad experience, sometimes even when they score. It’s really about that, in my opinion. And there’s a lot of aggressive panhandling. … Also, to their credit, everyone loves them. All day long, people say, “Where are the naked girls?”

C&S: Some elected officials, including Rep. Carolyn Maloney, have said that if the topless ladies go, you should have to go too. What is your response?

NC: Well, try it. That’s the whole problem. Why are we suffering in the financial markets? The Chinese are trying to organize free trade with top-down policies that don’t work. Why don’t they work? Because people at the bottom know that it’s bullshit. People spend the money the way they want to spend it, and top-down doesn’t work. So it’s the same thing. When I read that stuff, I when I’m at home again after 10 hours of work, a little tired, and I think, man, they’re going to get rid of me! But the bottom line is I literally drive in here every day. Everybody sees my car, they know it’s me. I pull in the garage, I’ve been in the same garage 16 years, and they all know it’s me. So if some idiot up in Congress might say, “Oh, well, if this is inappropriate for the girls, it’s inappropriate for the boys” – first she’s just not aware that the girls are not doing what I’m doing. They haven’t put in 16 years, snow, winter, fall, every season. They haven’t been there with the cops watching me freeze my ass off and pick up people and act like I’m totally warm and comfy. All that hubbub about what they’re going to do based on theory, it doesn’t reach the ground. I’ve been here for years. I’m from 47th to 42nd all day long, and I’ll do it every day until I die, and they love me. They care about me. They know I don’t offend anyone. They’ve seen me get slapped in the face and walk away and apologize. I have a long-term perspective. I have a brand. You can’t just turn it into “they’re naked, you’re naked.” … Somebody stupider than all of us will come in here and take the pressure off the naked girls, just like the naked girls took the pressure off the characters, who are the biggest, most horrible thing to happen in Times Square, and nobody’s even talked about them, because we’ve got a new enemy.

C&S: How has Times Square changed?

NC: The beauty of Times Square is that it’s always changing. But if I had to say one thing that’s changed more than anything, for the first six or seven years I stood at 45th and Broadway because there was a little island in the middle. Within the last few years when they built the pedestrian mall, it gave me the ability to leave that little island. Some people ask why I lived in a hotel for 10 years. It’s because I never felt like I could really, legitimately say I live here, and they might throw me out any minute. When they opened that pedestrian mall, which is pretty much the catalyst for everything we’re talking about, from the characters to the nude women and everything else. Again, I don’t want to say anything derogatory about the mall, but because it opened, there’s a hell of a lot more room to stand and relax. I always stood in the middle, and if you went on the side streets, the cops would say you’re impeding pedestrian traffic. There’s so many people, and they needed a place to stop. This is the place now. Obviously if you can stop and congregate, you’re going to have the homeless people and the people with the boards and 15 Elmos, six Cookie Monsters, five Buzz Lightyears, six Mickey Mouses, seven Minnie Mouses, you know? But again, it’s a blessing and a curse. It’s a blessing because the tourists love it, but for jaded New Yorkers who just want to walk through two blocks, they’re going to bitch and yell about the inconvenience of walking through a few characters who are also trying to make a living. But they just want to work, work, work, work, work.

C&S: You briefly ran for president, and you’re also originally from Ohio, a key swing state. So what do you think of the current crop of presidential candidates?

NC: Donald Trump, all the way! He’s a real man. My father’s the pro tem of the Republican Party in Cincinnati, a genealogist 40 years, a volunteer fireman 30 years, city council 30 years, vice mayor and mayor at times. I fight with him my whole life and now I’m just like him.

C&S: How did you get the idea to be the naked cowboy?

NC: I was a model. I thought somebody would see me and put me in a major movie. I did a couple B films, no sex or anything, just naked. An acting coach in California said I should take singing lessons to develop my speaking voice. He was just trying to help me talk like a normal person and not sound like I had marbles in my mouth. So I took singing lessons, I took that to mean I was going to be the greatest singer of all time. So I was trying to be a country singer, an actor or a model. Then I went to Venice Beach, California, to shoot for Playgirl Magazine 1998. I went out on the beach in my cowboy outfit – boots, hat, pants, flannel shirt, everything. I was ignored all day. The photographer shooting me for the naked magazine said why don’t you play in your underwear, do something different? So I played in my underwear. The next day I made over $100. The photographer called me “my little naked cowboy.” I went to my hometown of Cincinnati, played in Fountain Square, got arrested, made the news, went on a morning show the next day. I went from Cincinnati to Key West, Florida, all the way to California, 25 days on the road driving 12 hours a day. The media would come out, the news would come out, and the police would come out, and the people always did the same thing. They’d come out, I’d get on the news, and then go to the next city, for two and a half years. A friend said, “Why don’t you go east? You can get arrested every three hours instead of every 10 hours because the cities are closer together.” Everybody says I’m a genius for being in New York City, but the truth is, I got thrown out of 35 other cities with 40-something arrests. So I came to New York, they won. I went back to the Royal Motel in Secaucus, New Jersey, day two, day three. Spent 10 years in that hotel. Then I met my wife, and now I’m going on my 16th winter. Showing up is most of it. I just show up every day.