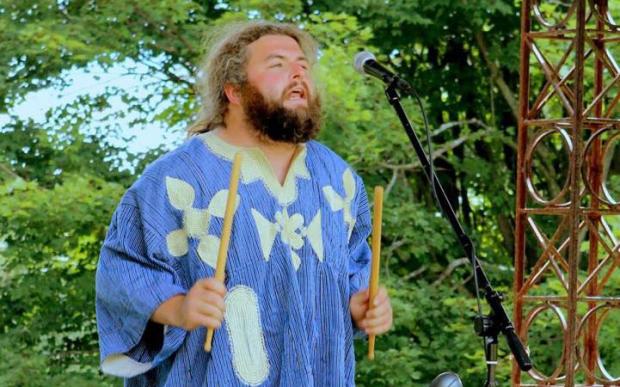 Drummer Griffin Brady travels the world looking for the perfect beat, and when he finds it, he brings it back to Buffalo. Each year for the past 10 years, Brady has held an ever growing jazz and world music festival in Western New York called Slyfest. The name is inspired by his band, On the Sly, and his music school, Sly Boots School of Music. Though his band is on and off, they’re returning to Slyfest this year after a few years on hiatus for a big reunion, something Brady is excited about. Running his school of music, where he teaches kids the intricacies of African drumming and percussion, is his main focus these days. He regularly takes groups of his students on trips to Ghana (this fall will be the ninth time Brady travels to Ghana) to meet his mentor Bernard Woma, a master xylophonist and percussionist and national hero in his home country. Brady met Woma at the age of 16 and credits Woma for turning him onto percussion. After experiencing the tragic loss of a close friend, Brady describes a moment of healing he felt while hearing Woma perform an ethralling percussion piece. The two struck up a close friendship and Brady went to visit him in Ghana for the first time in 2004. Now, Woma will return to Western New York to perform at the 10th anniversary edition of Slyfest.

This year’s Slyfest features a diverse range of internationally known artists. The headliner is Kaki King a 36-year-old guitarist. Rolling Stone recently crowned her as one of the “New Guitar Gods”—making her not only the sole female on the list but also the youngest person. She’s widely known for her work with Eddie Vedder on the soundtrack to the film Into the Wild, and for her collaborations with Dave Grohl. Her live one-woman show is focused on her unorthodox, virtuousic guitar playing. “Her style is very much non-traditional. There’s a lot of using the guitar as percussive instrument, and she often plays with her hand over the neck,” says Brady. The guitar itself is revolutionary too—custom built so that she can control images that are projected onto it as she plays.

The festival will also feature marimba and vibraphone player Arthur Lipner and his Brazillian jazz trio. “He’s a monster marimba player,” says Brady. “He’s been everywhere, played with everyone.” Lipner’s performance will be complimented by a screening of his documentary Talking Sticks, which focuses on the roots of mallet based percussion music—a work that’s been more than two decades in the making.

The two-day festival, this Saturday, September 5 and Sunday, September 6 at Griffis Sculpture Park also includes the Slyboots Drum Ensemble, On the Sly, and local jam bands Family Funktion and the Sitar Jams, Sonder, and much more.

The road to the the 10th Slyfest has been a winding one. What started in Fredonia as a friendly get-together, after a few years outgrew its environment. For the fourth, fifth, and sixth version, the festival moved to the North Fork Music Park where hot air balloons flew over the campgrounds during musical performances by artists like Marco Benevento and the Manhattan Project. Then the music park closed. Slyfest Eight was the first to take place in the City of Buffalo—at the Yard on Tonawanda Street—but rain and competing events made for an anticlimactic show. Shortly thereafter Brady’s space on Tonawanda Street was robbed.

“As they say, it gets darkest before the dawn,” Brady says with a warm smile.

When I met Brady to discuss Slyfest we convened at what seemed like an abandoned church. The church lords over the traffic circle at Richmond and West Ferry—a beautiful Romanesque style church that its new owner, Rachel Heckl, informs me was constructed in the early 1800s. I met Heckl as I walked into the center of the vaulting sanctuary of the church. The handmade pews still surround the pulpit, which is situated below a gigantic Felgemaker organ. Heckl is in the middle of inspecting the church, disguised in a medical facemask with a flashlight strapped around her head of short curly brown hair. Brady, a stout guy with long light brown hair and a fluffy beard, informs me that this will be the new home of not only the Sly Boots School of Music, but also what Heckl and Brady’s team imagine as a vibrant multicultural art center with a focus on dance, world music, and even some visual art. It’ll be called the Buffalo World Music and Dance Academy and it’s expected to be up and running in September of 2016. Funding for the renovations of the church, which will run upwards of four million dollars, will be partially provided by the City of Buffalo and matched by Heckl’s family’s foundation.

Up until 1998, a Methodist Episcopal church congregation occupied the church. The handmade pews and stained-glass windows were largely crafted by members of the congregation. When it closed down, it was sold to a local nonprofit that envisioned a community theater space and arts studio. They were close to their goal, says Heckl, but their funding dried up. When the church went back on the market, she acquired it to carry on a similar vision, a vision that also happens to jibe with Brady’s.

“Our market analysis and a lot of our surveying of the community shows that more of a dance-driven space is appropriate. And that’s across all genres,” says Heckl. ”This space, the size of it with relatively little modification will be perfect. It’s a great space for music too because it’s acoustically perfect.”

Brady lets out a shriek to test the acoustics. The shriek rings out with just the right amount of natural reverb.

“If I’m ever having a bad day, I just come in here, and in the raw space stand on this stage and sing for 15 minutes, and I feel cleansed and at ease. I’m just like ‘oh yeah, okay. We’re all right.’ The possibilities set my imagination on fire,” says Brady.

The union almost seems too good to be true for Brady. Heckl’s mission is “something that resonates a lot with her personally and through her family,” says Brady. Heckl has a masters degree in urban planning, but to assemble the integral parts to build the cultural, dance, and music portion for the art space, Brady was essential. “When she saw the work I had been doing over the past decade with this group, she was like ‘Hey, this is what we want at the heart of this operation,’” says Brady.

Brady brought me back through the unfinished chapel of the church—a soon-to-be practice studio in an open, two story area. He described the renonvations that’ll be done before we walked back down into the sanctuary of the church where one of his teachers, Ashley Vita Verde, sat in a pew halfway down the aisle. Verde teaches dance, arials, and acrobatics, and she’s part of the Sly Boots Circus. In 2010 she made the trek to Ghana with the Slyboots School. ”It’s always a wild ride [working with Brady]” says Verde. She’s happy to be involved in the movement to create this new space, she tells me. ”It’s really interesting how timing and positive attitudes change things.”

If there’s one thing Brady has, it’s a positive attitude. As he wrapped up our tour of the church, he reflected on his mission.

“There are no accidents, and me meeting Rachel is proof of that. She’s brilliant and inspiring, and she’s giving this dream a new chance,” he says. “It’s through music that I’ve found the inspiration and healing to go on. If it can work for me, it can work for others.”