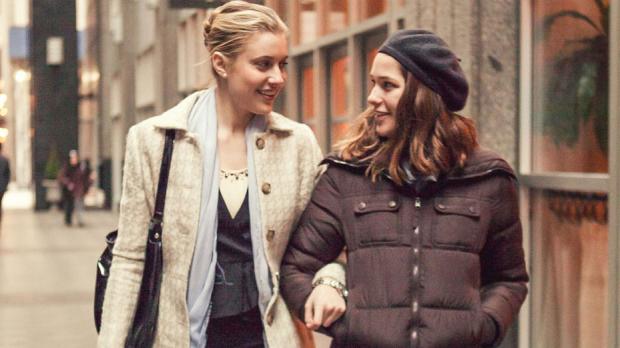 Into each life, a little Brooke inevitably falls. You know the type, the self-absorbed, city-dwelling whirlwind who never accomplishes anything because she’s always trying to do a dozen different things at the same time. The nice way to describe her is that she’s so alive to the possibilities of life (especially in a city like Manhattan) that she can’t help but reach out to more opportunities than she can possibly handle.

Or you could just say she’s a manic nut job.

You could also think of her as a younger version of Auntie Mame, a comparison that was certainly on the minds of Greta Gerwig, who plays the role, and Noah Baumbach, who co-wrote the script with her and directed the film. Baumbach in particular is an aficionado of classic Hollywood cinema (his mother was film critic Georgia Brown), but he’s not an imitator. Mistress America is being promoted as a modern screwball comedy, and it certainly harkens back to that frenetic genre, but with a modern twist.

We meet Brooke through Tracy (Lola Kirke), a college freshman and Brooke’s stepsister-to-be. Tracy is an aspiring writer disappointed by her initial experience of college life, so she accepts Brooke’s offer of a get-to-know-you meeting. And the initial effect is dazzling: While life for Tracy seems slow and pointless, Brooke is as bubbly as freshly uncorked champagne, full of plans and ideas. Her current favorite, to be financed by her Greek boyfriend Stavros, will be called Mom’s—“A community center and restaurant all in one, with a really nice bodega selling European candy, and cooking lessons.” Do I even need to say that it will be located in Williamsburg?

It doesn’t take Tracy long to see through Brooke, though she finds writing inspiration in her. As Brooke’s (admittedly half-baked) plans fall through, she drags Tracy and a few dorm-mates off to Connecticut on a mission to secure new financing from a girlfriend she hasn’t talked to in years.

At this point Mistress America doesn’t so much hit its stride as shift gears. It moves into a classic screwball situation, a bunch of people in an elegant setting all working and talking at cross-purposes. As he did in his last film, While We’re Young (in theaters only a few months ago), Baumbach has an eye out for the self-rationalizing machinations of creative types; it’s funny, but also bitter.

What keeps the movie palatable is Gerwig, who seems to have found a home in independent cinema after her Hollywood shot (as the female lead in the remake of Arthur, against Russell Brand, who tends to suck all the oxygen out of the room) was a flop. Comedies like Whit Stillman’s Damsels in Distress, Lola Versus, and Frances Ha (also in collaboration with Baumbach) have been showcases for her willingness to throw herself into wounded but not entirely sympathetic characters. She’s probably never going to become a household name, but they way she’s going, I hope she never goes back to Hollywood. Mistress America opens this weekend at the Amherst and Eastern Hills cinemas.

The subject matter in Best of Enemies—the 1968 televised debates between William F. Buckley Jr. and Gore Vidal—is the definition of a guilty pleasure: It is enjoyable to watch, and as this documentary by Robert Gordon and Morgan Neville makes clear, we should feel bad that we did (and do).

Back in the 1960s, Americans trusted television news. At the time there were three networks, so there wasn’t much to chose from. But for that very reason the networks took that responsibility seriously: If Walter Cronkite or David Brinkley reported something, you trusted that serious effort had gone into verifying the story, and that it was something that you needed to know.

Another thing about America at the time that may seem odd to young viewers: Political conventions existed not to finalize and celebrate the party’s candidate, as they do now, but to select him. For this reason they were very important, and in a year as tumultuous as 1968, the whole country was watching the conventions to find out what two men we would choose from to lead us.

Desperate to increase their minimal ratings, ABC decided to stage a series of 10 debates, one during each night of the conventions, between Buckley, founder of modern conservatism, and Vidal, then infamous as the author of the bestseller Myra Breckinridge but a longtime political commentator from the liberal side. The two were respected as public intellectuals, a phrase you don’t hear anymore now that the country has grown comfortable with its hatred of intellectuals. And the two loathed each other.

These were debates only in the loosest sense of the word. Each was determined to score points of any kind off the other: The gloves, as they say, were off. By that standard the winner was Vidal, who so rattled his opponent that Buckley called him a “goddamn queer” on live television.

Of course this was enormous fun to watch and still is. But it was also an early highwater mark in the deterioration of public political discourse. As Vidal notes, “Argument is sugar and the rest of us are flies.” The networks, and pretty much all the media, noted the high ratings that surprised no one more than the suits at ABC, and all the gloves came off. It’s an entertaining documentary, as well as a very sobering one. You can see it this weekend at the Screening Room.