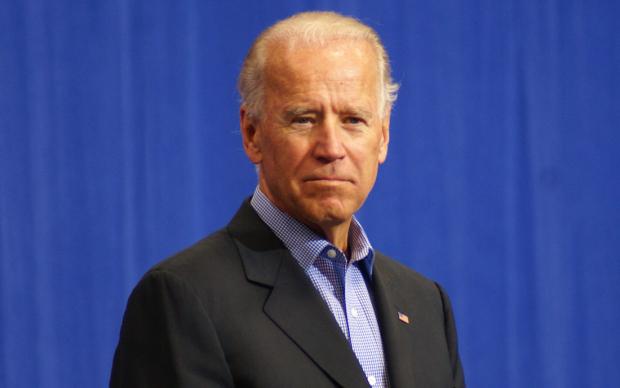 If America and the world are lucky, Joe Biden will face a broken Republican party and a ranting third-party Donald Trump tantrum in the presidential election of November 2016. If we eat all our broccoli and do our homework and all our chores and are truly blessed, it’ll be a replay of 1992 and 2008, when Joe Biden becomes President the way Bill Clinton and Barack Obama did, winning Democratic majorities of the House and Senate after a tepid Republican turnout.

If we’re not lucky, Hillary Clinton will refuse to give up her very troubled candidacy, and her incompetent campaign will once again blow what should have been a sure thing—because without Biden in 2016, the chances of a Republican victory, mainly because of voter distrust of Hillary Clinton, are very real.

The vice president of the United States is the only Democrat who can form the bridge between Bernie Sanders supporters and the about-to-be-available base of Hillary Clinton. That bridge would be rock-solid were Biden to announce, early in his candidacy—say, by Thanksgiving—that he will ask Senator Elizabeth Warren to be his running mate.

Sadly for Hillary Clinton, her campaign apparatus is destroying her candidacy because of a misread of how deeply and broadly voters are put off by her lack of transparency, most recently on the issue of her private email server. The substance is probably not the issue unless and until the FBI finds a criminal case to pursue, as it did with former General David Petraeus. (Sensible people thought that Petraeus could have been a new Eisenhower.) What’s much more important is the politics: Clinton and her campaign team have given the appearance of stonewalling, evading, and denying, and have done so with a haughtiness that unintentionally amplifies a destructive undercurrent of her own messaging.

The undercurrent? A certain royalism, a disingenuous royalism at that—amplifying the negatives of the candidate who claimed that she and President Bill were “dead broke” when they left office, but who admits to have had an income of $21 million last year. Clinton’s candidacy was self-torpedoed when she uttered the phrase “everyday Americans” in her announcement video, a phrase that is restated in her campaign emails. Any competent focus-group researcher should have picked up that such language is perceived as condescending, and that it amplifies Fox News’s core critique of her—that the former secretary of state, senator, and First Lady holds herself above the rest of us.

The contrast Biden offers could not be more clear. He made his salary last year, and every year previous, and that’s about all. As for assets, he owns a house and a couple of acres in Delaware, and the endless grief of a father who has lost children.

Should he and his decide that they can handle the grief, one expects he will run. If he doesn’t, Hillary Clinton’s troubles, and her political steam-punk operation, could doom us to the grim potential of a national government run by the Koch brothers.

Presuming that conventional politics survives
The case against Biden is this: We’re in extreme times, mainly because the rotten cake that 40 years of middle-class income stagnation has baked is now frosted with extreme anxiety. In these ugly new times, even Biden is as vulnerable to right-wing extremism as Hillary Clinton is—that he’s too much of an insider at a time when outsiders have the floor.

That’s blather. Given demography, a mainstream Democrat should be able to win in 2016. But a left Democrat won’t.

Here’s why. First, there’s the primary process. The probability for Democrats is that the good people who support Bernie Sanders are insufficient in numbers, organizational ability, and cultural affinity with the large majority of Democratic primary voters, who will indeed turn out for a more mainstream candidate. Thus Hillary Clinton.

But to be clear about Sanders supporters: They are overwhelmingly white, older, educated, Northeastern, and either estranged from or not quite connected to local Democratic party organizations. Few are black, many are educators, most are coastal. Look around at the number of fervently green or strongly progressive members of city councils, school boards, and county and state legislatures, compared to the conventional Democratic candidates who lean toward labor but accept help from bankers and real-estate developers, and you will see that Sanders’s ceiling is fairly low.

The other Democratic prospects have no legs. Governor Martin O’Malley of Maryland is campaigning for an appointment to some cabinet post—or perhaps police chief of his troubled Baltimore hometown—and Senator James Webb of Virginia is the Scoop Jackson of the 21st century, a neverwuzzer wasting his breath trying to be a national candidate.

The closer one looks at Biden, the more one wonders, if only in political terms, why he wasn’t always the natural choice of his party. The answer, of course, is that Hillary Clinton is the natural choice, too. Except that now her negatives are so high that she is unelectable unless she turns them around today—or, preferably, yesterday.

So is Biden electable?

The short answer is yes. The more sensible answer is yes, of course. Or yes, in thunder. Or, if you prefer, duh.

The reassurance factor
It could be that Hillary Clinton’s candidacy will recover—that despite the 2008 problem of a sclerotic campaign bureaucracy created and led by the fattest of Washington fat-cat corporate consultants, and despite the 2015 email scandal that has wrecked her trustworthiness, she will nimbly purge all the courtiers and corner-cutters with whom she surrounds herself, and then blast forth with a clarifying populist message, humble herself in some momentous demonstration of existential genuineness, and achieve a candidacy renaissance.

This would be desirable, for several reasons.

First, for Biden or anybody else to put together a campaign will mean putting a large number of political activists in very uncomfortable positions. Hillary Clinton has assiduously collected endorsements and as-good-as endorsements from enormous numbers of African-American and Latino political leaders; she also has the endorsement of the largest women’s political organization in the country (known as the national teacher’s union), and remains very strong with labor and other people with phone banks, door-knockers, and GOTV blood.

Second, Hillary Clinton has a strong claim to the political loyalty of millions of other middle-aged and older women who vote in primaries—especially open primaries, the ones that are open to voters of any party, as in the Alabama, Arkansas, Georgia, North Carolina, Tennessee, Texas, Vermont, and Virginia primaries, which in 2016 will all occur on “super” Tuesday, March 1. That’s the day when Hillary Clinton could win with a combination of her husband’s African-American base supplemented with crossover votes from Republican and Independent women. In the contest for the emotionally committed, any Caucasian male candidate who tries to wrest them away politically may cause offense, as Biden inadvertently has with his very touchy manner, which is sometimes intrusively touchy. One expects that pictures of Biden looming over the spouses of Obama appointees and grasping their shoulders, as he has often done, will be YouTubed endlessly to send the message to women that he is creepier than he is friendly.

Third, Hillary Clinton has raised an enormous amount of money. She has done the hard, ugly, necessary work of going to the worst places—mainly Wall Street—to raise the money that will have to be deployed in that short-lived major corporation known as a presidential campaign, whose sole object is to last long enough, efficiently enough, to deliver, on a November day in 2016, more market share than its rival.

Sadly, Clinton will probably not recover her electability. The only question is whether she will withdraw when it becomes clear that her candidacy is untenable—because that is where the investigation into her emails may lead.

Where will that put us? Without a Biden candidacy, Hillary Clinton’s troubles would elevate Bernie Sanders, but what of it? Sanders might defeat her in Iowa, which is a caucus state, meaning that in the first week of February 2016, all Sanders has to do is to organize around 50,000 folks in that state to go to a bunch of little meetings for him. Sanders routinely turns out 10,000 people at rallies, so a whole bunch of little mini-rallies shouldn’t be a problem. The week after, Sanders might well win in New Hampshire, which is conveniently located next door to his home state of Vermont. Then, Sanders’s candidacy will hit a wall as he loses the overwhelmingly African-American primary in South Carolina. Super Tuesday comes on March 1. The candidate who can attract the Democratic base will win. The one who won’t will be an also-ran as of that day. Super Tuesday could destroy Sanders and secure the nomination for an unelectable Hillary Clinton.

As it becomes increasingly clear that Bernie Sanders supporters will not bridge their cultural and political divides with Democratic primary voters, the question of where mainstream as well as progressive Democrats can go will become more urgent.

Biden is the answer to that question. He is the vice president who was quite forcefully first in pushing the White House on same-sex marriage, the longtime progressive on taxes, the former senator with the 36-year Senate record on criminal-justice reform, the passionate Senate advocate for under-armoring Army vehicles that Iraqi militants were blowing up with IEDs while Pentagon bureaucrats and penny-pinching Republicans were content to just let explode. Joe Biden is, the longer one looks, the obvious alternative.

What’s true is that Biden is a professional senator and as such the reassuring old pro. Keith Richards in a politician suit? Nah. Older than Richards by a couple of years, but indeed, as with Richards, you know what you have with Biden, and he is a perennial best-seller. Until he became vice president at the age of 65—and thus president of the Senate—Biden had worked for 36 years as a senator. He is known by the public, trusted by military leaders, and known by generations of international leaders—but he is absolutely not a shoo-in as nominee if Hillary Clinton decides to stick it out and fight for what her own negatives will deny her.

Unless, of course, Biden teams with Elizabeth Warren as Hillary Clinton’s troubles mount. That dynamic could change it all.

It’s a bit early to ask what the points of differentiation might be between Biden and Hillary Clinton. Her troubles are her main issue. She has about a month to fix them. If she can’t, then it’s Biden time. Should she persist even if her troubles grow, then it’ll be difficult. For everybody.