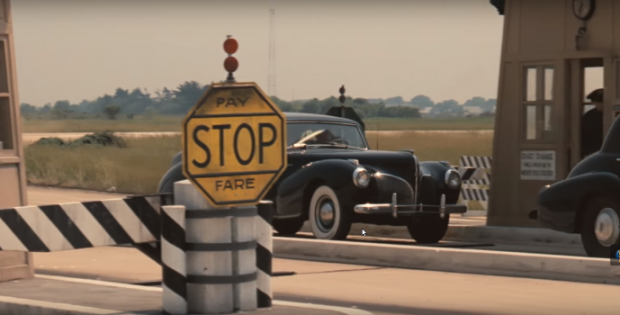 For the balance of this column, let us assume that the New York State Thruway is a roadway for which exorbitant tolls remain necessary. Let us agree, for the sake of argument, that it is somehow acceptable to pay just under $20 to travel on an expressway from Transit Road to Yonkers Raceway. Entre nous, let’s concede that there is an especial joy in, say, driving 15 miles perhour under the posted speed limit as one truck takes five miles’ worth of roadway to overtake another, or how the rest areas inexplicably and unremorsefully shelter the only remaining Roy Rogers franchises in the known universe—detritus from a bygone era; the Fish that Saved Pittsburgh of fast food franchises. Face it—that “Fixin’s Bar” is so 1978.

Let’s forget, for a moment, that the Thruway should have been expanded to three lanes in each direction many moons ago, and how its speed limit should really be 70, if we’re being honest.

According to a source in the know, it would take about 24 months to completely transform the entire Thruway to cashless tolling. That means ripping down toll booths at every exit from Harriman to Ripley and replacing them with overhead transponder readers and cameras set up to snap license plates at high speeds. It is 2017, and the Thruway still employs human beings—paid in actual American money—to stand in a booth literally to operate an automated ticket dispenser for you, and hand you the toll ticket.

Ever watch the Sopranos? That show came out in 1999. During its opening titles, Tony enters the NJ Turnpike and is seen retrieving his own toll ticket from an automated dispenser. Again: New York believes that you need an actual, living person to stand in a booth and execute that complicated endeavor for you. There is no way to make that up. Even Massachusetts now has cashless tolls along its Turnpike. I don’t like to see people lose a job, but “ticket dispenser operator” is about as necessary for today’s Thruway Authority as ”blacksmith” or “milliner”.

It was announced recently that the Grand Island tolls would switch to a cashless system. Downstate, New York has already implemented this at the Queens-Midtown Tunnel and the RFK / Triboro Bridge. Cashless tolls snap a picture of your license plate and/or read your EZ-Pass transponder as you continue to travel at regular highway speeds. The toll plaza bottlenecks and backups are eliminated, and the entire process is seamless. If you don’t have a transponder, you are billed by mail. It has been thus on Toronto’s 407 since the day it was built. The Buffalo market is special for the Thruway. Not Rochester, Utica, nor Syracuse get a special toll-free local area of the Thruway, but we do. That means, however, that through traffic has to pay up at Williamsville and/or Lackawanna. Neither of these toll barriers allow for any through passage at highway speeds—all traffic must stop or slow. Traveling west through the Williamsville toll, you have maybe two EZ-Pass only lanes—one at the extreme right, and another at the extreme left. 18-wheelers are allowed to use them both.

There has been talk in the past of extending the “free” zone of the Thruway west to include the Transit Road exit 49, but people between Clarence and Pembroke balked at the concomitent movement of noise and pollution; this despite the fact that one option was to put the plaza adjacent to a quarry which regularly uses dynamite.

At long last, someone is talking about bringing the Thruway kicking and screaming into the 21st century, with cashless tolling to eliminate the backups in Williamsville and Lackawanna. An initiative led by Congressman Brian Higgins would use money earmarked for toll plaza “improvements” and instead replace them with overhead transponder readers and high-speed cameras. New York’s “tolls by mail” infrastructure is already in place. Even if the change was just applied to the barriers that bookend Buffalo’s free Thruway section, it wouldn’t take much to add cameras at every other toll plaza to bill motorists by mail.

But switching just Williamsville and Lackawanna is stupid. Do it all, and do it right. Imagine the time and fuel savings—not to mention drop in pollution—by eliminating idling vehicles and plaza backups from the Thruway equation.

Don’t like the transponder system or bill by mail? No worries—here’s an alternative. In 2012, I wrote, “The 1950s Called: They Want Their Toll Road Back”, where I suggested that cashless tolling could be accomplished quite easily using the model used elsewhere in the world,

If tolls are to be maintained, the Thruway could take a hint from Toronto’s 407 and make toll collection something that’s done at highway speeds. However, that’s costly, and cars without a transponder pay an extra fee for the license-plate-photograph privilege. Instead, many European countries share the cost burden of highway maintenance through sales of stickers.

Police spot checks look for scofflaws. If caught without a vignette, the Swiss charge you a SFr 200 fine, plus the cost of a vignette. The Austrians will fine you €120 on the spot.  Given that it now costs almost $20 to get from the Major Deegan to the PA line, a $10 sticker for 10 days’ worth of highway travel is a bargain. So is $40 for the entire year. Vignettes could be sold at welcome centers entering New York or leaving bordering states. They could be sold online, in advance, or, as they are in Hungary, even via cell phone text message. No more toll barriers, no more toll collectors.

In 2013, I found it downright unconscionable that there was no progress being made to introduce cashless tolling of some form on the Thruway, adding,

The reason why the Thruway Authority will never, ever change the toll plazas in Williamsville and Lackawanna has to do with the fact that western New York is a nonentity. No one from Albany needs to pass through here on their way to Erie, and so it doesn’t really matter all that much whether you’re sitting in unnecessary traffic at Ripley, Lackawanna, or Williamsville on the I-90.

It’s 2013 and completely unacceptable that we haven’t made use of the not-very-advanced technology that is available to permit EZ-Pass holders fly by the toll plaza at highway speeds. No EZ-Pass, you can pay cash at a booth located off the main road, like they do in Florida…There is no accountability, so there is no motivation or impetus to improve service to Thruway consumers. It is more evidence of the dictatorship of the bureaucracy under which we live in New York.

A bit fatalistic, to be sure, but accurate. But some local politicians were pretty stupid when it came to the Williamsville barrier, such as the time Clarence’s then-supervisor voted against a resolution in favor of moving the barrier east because it would somehow ruin business along Transit Road. I brought up cashless tolling again in 2014, effectively yelling at clouds like Grandpa Simpson. If people still insist that moving to an all-cashless system on the Thruway is somehow too complicated, then do what Florida has done for at least a decade. Cashless tolling is an idea that is long overdue. The New York State Thruway is ruled by a bureaucracy that is extraordinarily resistant to change, clinging to an outmoded way of doing business like barnacles to a hull.

Toll barriers are to driving what Roy Rogers is to fast food: a mediocre anachronism.