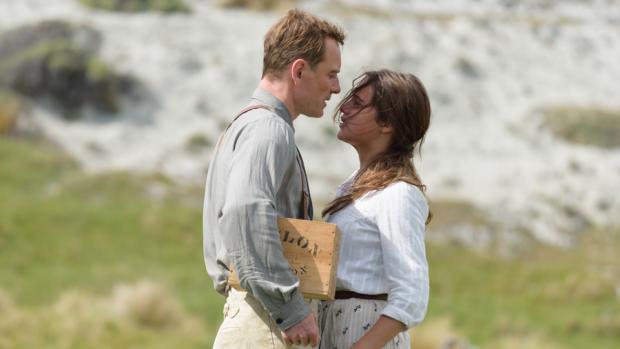 “I’m just looking to get away from things for a little while,” says Tom Sherbourne (Michael Fassbender) as part of a job interview. Those things include his four years in the French trenches fighting the War That Was Supposed to End All Wars, since renamed World War I. He doesn’t get more specific than that, but from the pained look in his eyes you figure it’s just as well: He’s a man on the run from his own death wish. Now that it’s 1918, and the job he gets is tending to a lighthouse on the western coast of Australia, on an otherwise uninhabited island. He will be 100 miles from the nearest human being, which is fine by him.

Except that once he gets there, he can’t get out of his mind Isabel Graysmark (Alicia Vikander), young daughter of a local family who hosted him before his departure. Though she has led a sheltered life, she has had her own share of disappointments, and after corresponding they decide to marry.

Tom and Isabel make a paradise of their island home, but after a few years it becomes clear that she is unable to bear a child. So when an infant washes up on their beach in a rowboat, it must be a gift from god, yes?

Maybe not, argues Tom, who is nothing if not duty-bound. It’s his job to report their discovery to the authorities and then hope for the best. But his young wife is having none of that. She argues forcefully for keeping the child and raising it as their own—who would ever know? And against his better judgment Tom gives in.

If you think this is going to lead to a happy ending, you haven’t been to the movies much.

The Light Between Oceans was adapted from a novel by M. L. Stedman that sold a whole bunch of copies in 2012. In an interview, the first-time author says that she didn’t know what her characters were going to do, but wrote the story to learn about them, trying to remain nonjudgmental. Those characters include the baby’s real mother, and the ensuing dilemmas are the kind of material that have made the Lifetime Channel what it is today.

How one feels about this sort of story is a matter of taste: Suffice to say that while Stedman does an admirable job of being even-handed with her characters, she is on much shakier grounds in finding ways to move the plot along. Instead, in the interest of drama they do dumb things. When that fails, we get simple fate reaching down to gum up the works.

Still, if you have to make a movie out of this kind of thing, the result here is about as good as you might be able to hope for. This is somewhat of a surprise given that the director is Derek Cianfrance (Blue Valentine, The Place Beyond the Pines), an American indie not known for restraint. He can’t do much about the story’s forced twists and turns, but he keeps the emotionalism from getting out of control. At this, he is aided by a cast—Rachel Weisz co-stars with Fassbender and Vikander—who all could have been stars in the silent days for their ability to project without dialogue. Cianfrance and his cinematographer Adam Arkapaw (who also worked with Fassbender on MacBeth) make maximum use of the sea and skies in the area, which are seldom less than troubled. It’s like watching a Thomas Hardy adaptation filmed by David Lean: a tasteful tearjerker where you wish the story was of the same quality as the rest of the film.