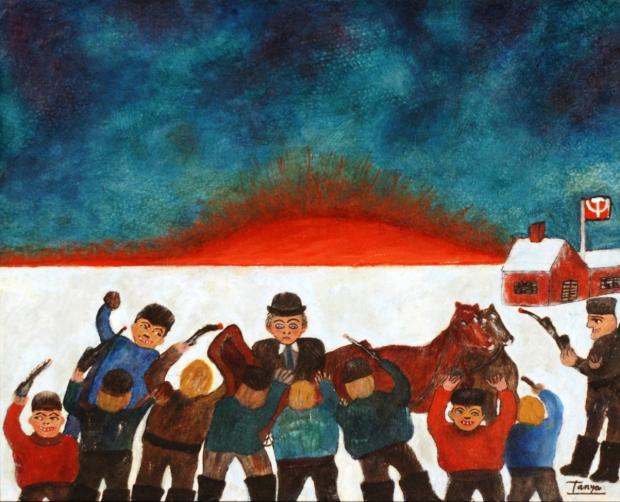 At the Burchfield Penney, works by immigrants and refugees from far-flung places

A timely exhibit at the Burchfield Penney presents works of Buffalo area immigrants and refugees from places around the world from China to Cuba, Poland to Peru, Bosnia-Herzegovina to Haiti.

Two brutalist realist paintings by Tanya Ganson, born in Ukraine a few years before the 1917 Communist Revolution and bloody aftermath struggle to force the country into the Soviet Union, illustrate some of the aftermath mayhem. In one, a pair of apparent summary executions by soldiers or police in the foreground, while in the background a woman plays piano, as if blithely unaware of the gruesome activity a few feet away. The other of what again appear to be summary executions, this time by lynching. Dead or dying victims hanging from a line of streetlights—one suspended victim per pole—while in the middle distance, a cluster of what at first glance appear to be Ku Klux Klan figures—out of context with the Ukrainian story, but not out of context with lynching—huddling as if in fear. Figures in white robes and peaked hoods. But at second glance, not peaked hoods at all, but onion domes, gold-toned. So churches, the Church. A statement perhaps about its silence, timidity, in the face of social/political unrest and injustice.

Artist Alberto Rey was born in Cuba in 1960 and his family fled the country in 1963. In 1988, he returned for a visit, during which he exulted in the tropical paradise natural beauty of the island, but was dismayed at the poverty and politics of the Castro regime. For one thing, as a native-born Cuban—even as a naturalized citizen then of another country—he could legally be detained on the island and kept from returning to the United States. He was able to return, but vowed he would never revisit Cuba. Until recently an editor of a fly fishing magazine asked Rey to accompany him on a trip to Cuba, as a guide (who could speak Spanish), and to create painting illustrations for a feature article the editor was planning. After some soul-searching, he decided to accept the offer. His contribution to the current show is a twenty-minute video on the trip and some of the soul-searching.

Another work is by photographer George Campos, who emigrated from Cuba in 1961. An epic vision cloudscape. Label expository copy connects the photo to pioneer art photographer Alfred Stieglitz’s series of cloud photos he called “equivalents.”

Among abstract works, one by the late James Kuo, originally from Suzhou, China, whose work in general featured a harmony and balance of abstract forms reminiscent of classic Chinese landscapes, mountain and river scenes. And Jozef Bajus, born in Kezmarok, Czechoslovakia, and now a professor at Buffalo State College, has one of his recycled materials works—black roofing paper in this case—with titular reference to hurricane Ike that walloped New Orleans in 2008, three years after Katrina, nine years before Harvey. And Robert Pacheco, of Peruvian origin, has a sculptural chunk of rough-hewn maple wood with metal and concrete addenda.

Niels Yde Anderson, an architect and engineer from Copenhagen, Denmark, immigrated to Buffalo in the early years of the twentieth century for employment in connection with the burgeoning iron and steel industry here. He eventually became noted for his expertise in designing blast furnaces. To the point that in 1932 his employer—it doesn’t say who, but likely Bethlehem—lent him to Stalin and the Soviets to assist in construction of the largest steel mill in the world at the time, in Moscow. One of his drawings on show depicts workers building a rail line, lined up along the tracks in perfect spatial regularity—like pawns on a chess board seems to be the idea—transforming the Russian traditional agrarian economy into a modern industrial one, according to the strict directions and timetable of Stalin’s famous Five Year Plan. The other is of workers after hours, in drink and song.

While from Craig Gerrard-François Centrié, born in Haiti in 1953, a folk-art wayside shrine crucifix image reminiscent of the iconic Gauguin work across the street in the Albright-Knox. And cheerful community scene of layered green hills and ranks of yellow residential buildings, under azure skies.

About twenty works in all in this excellent small show curated by gallery Burchfield Scholar Nancy Weekly and Archivist Heather Gring.

At an historical moment of record high numbers of immigrants and refugees worldwide. Some sixty million according to 2015 data. People who are homeless and in need, much as we or our ancestors—unless we are of Native American Indian stock—were once homeless and in need, but found a place of refuge here. In the richest nation in the world, and therefore most able to accept and assist current homeless and in need. And a nation vociferously professing religious values based on charity. And our national official position on this world crisis situation—from Trump and his minions, and the Republican Congress, and as well, it would seem, a disturbing number of private citizen Americans—is basically, and not to put too fine a point on the matter, fuck ‘em.

The immigrant and refugee works exhibit continues through October 15.