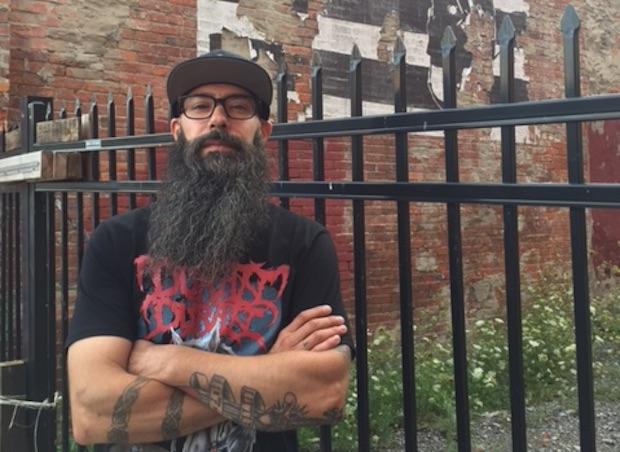 A black-and-white poster of a flag veils the side of a brick building in an alleyway in downtown Buffalo. Instead of stars on the flag, the stars have been replaced with Mickey Mouse symbols with skulls inside of the Mickey heads.

Johny Chow never knew he would be part of a team that opened a restaurant right next to the brick wall that showcases his artwork.

Chow’s father immersed him in music world. He grew up in Buffalo, listening to the classical and opera music that his father enjoyed. Chow’s father gave him his first taste of a concert as well, when he let Chow stay up late to watch the Who in concert on HBO.

His neighbors also had a large musical influence on him. His next-door neighbor’s father listened to the Beatles and the Rolling Stones, and “Gimme Shelter” was the first song he fell in love with—something with a completely different sound than he was used to hearing.

One of his neighbors had a drum kit, another a guitar. Chow garbage-picked a guitar with four strings, and the group hooked up that guitar to an amp and turned the bass all the way up. At 11 years old, Chow, completely self-taught, became the group’s bass player. They played covers of Suicidal Tendencies and Black Flag.

Nearly a decade later at age 20, Chow was still playing, and his father encouraged him to move if he was going to take his music career seriously. With that push, he moved to New York City, and started playing at legendary venues—CBGB, Coney Island High, and Continental.

Many chance meetings sealed his fate as a successful musician. After moving to New York City, Chow met his friend Roy Mayorga, drummer of award-winning alternative metal band, Stone Sour. Roy played in a band called Nausea at the time, and was a sound guy at Wetlands and CBGB. Twelve years later, Chow moved to Los Angeles, and joined a band called My Ruin, through which he met his friend Yael, and learned that Yael and Roy knew each other—they had grown up in New York City together.

Shortly after, Chow and Yael attended a convention of the National Association for Museum Merchants (NAMM), a century-old trade organization of companies that make musical instruments. At NAMM, they ran into Roy and reunited.

At the time, Chow was in a band called Cavalera Conspiracy, but knew he would be on a brief hiatus from the band. He asked if Roy’s current band needed a bass player, and Roy was happy to have Chow join.

In addition to being a successful musician, Chow is also a visual artist. His signature artwork is his Mickey Mouse skull, the “monstro,” a Mickey doll with the face cut out, and replaced with a skull, a glass eye on one side, and the nose put back on. On tour with his various bands, Chow has covered the globe with this artwork, in different renditions, colors, and designs. His art can be seen in Adelaide and Melbourne in Australia, Sao Paulo in Brazil, Paris in France, Warsaw in Poland, Chicago and Buffalo, and many more countries in Europe and throughout the United States.

The artwork on the Buffalo wall is adjacent to the restaurant Misuta Chow’s, which he and his partner in life and business, Christi Allen, recently opened, along with executive chef Dunbar Berdine. As Chow is inspired by art, he is also inspired by his travels, and this restaurant is an inside view into what attracted Chow to Tokyo, one of his favorite places to visit. The restaurant showcases the yokocho alleyways, with lights and lanterns and the outdoor seating.

We’re ready for ya Buffalo! Hope to see you all this weekend! Thanks for the great pic @chopskee #misutachows #buffalove #arcade #streetfood

When one walks up the stairs in Misuta Chow’s, a fire-breathing monster movie poster is proudly displayed on a large brick wall on the way to the second floor. Instead of movie credits, the names on the artwork display the names of the people who are a part of bringing Misuta Chow’s to life. Chow attributes his successes to those who have helped him along the way.

“It’s like that saying with luck: ‘Luck is where opportunity and preparation meet,’” said Chow. “An opportunity arose and I was prepared to take that opportunity. If that’s luck, then, yes I’m lucky. I worked hard to get where I’m at. I’ve reinvented myself over and over because I wanted to be where I’m at. All you have to do is stick to your guns. I’m very fortunate to be here, very thankful.”

Besides his travels, Chow is inspired by his family, and inspired by other bands in the industry he is grateful to be a part of.

Chow’s son loves alternative rock music, and Portugal. The Man is one of his son’s favorite bands. Chow started listening to their music because of his son. While in Europe playing a music festival with Portugal. The Man in the lineup, he wanted to meet them to tell them that his son inspired him to listen to their music. While waiting to talk to the band, Chow watched Milky Chance as well, another band his son told him about.

While watching Milky Chance, a few guys come up to stage whom Chow had not met yet. One of the guys was in a wheelchair: Portugal. The Man’s guitarist and vocalist, Eric Howk. When Howk had an accident and was paralyzed, the band put their music on hold until Howk was able to be a part of the band again. That moment and lesson hit Chow hard.

“Talk about inspiring. This guy is out there slaying, he’s an amazing guitarist. They’re a platinum, award-winning band, they’re out there slaying it. I was so inspired by that and blown away.”

Chow is currently on tour with Stone Sour, as the opener for Ozzy Osbourne’s Farewell Tour, “No More Tours 2.”