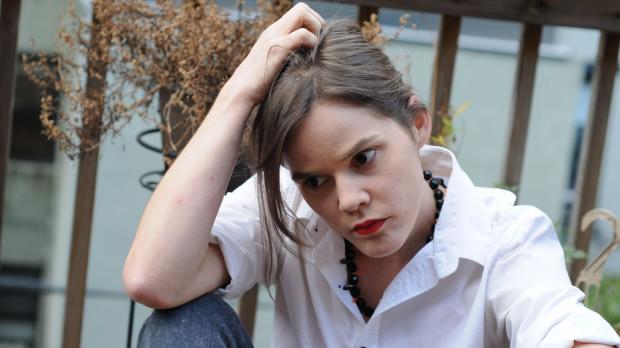 Visiting Buffalo’s haunting Silo City this month to read her poems at the season finale of Just Buffalo Literary Center’s ever-impressive Silo City Reading Series, Bianca Stone is a Brooklyn-based poet and poetry comic artist (whose work was featured on last week’s cover of The Public). Author of Someone Else’s Wedding Vows and the forthcoming Poetry Comics From the Book of Hours as well as illustrator of Antigonick—a collaboration with Anne Carson, Stone is co-founder/editor of Monk Books and chair of the Ruth Stone Foundation. Inspired by poet Ruth Stone’s legacy, the foundation’s mission is to provide diverse writers/artists with safe and inclusive homes that includes physical homes for writers to create in through Safe Places (a program that aims to ensure that young writers—particularly those that are gender-queer, persons of color, trans or female—visiting NYC can stay somewhere without the threat of unwanted sexual advances/sexual assault) and Next Galaxy (an initiative to convert Ruth Stone’s decaying home in Goshen, Vermont into a creative space for writers and artists); as well as homes made of paper for diverse writers’ works through publication.

Thus, to introduce Buffalo readers to her stunning work, I asked Bianca Stone to tell us a little a bit about the house where her poems live.

What does the house where your poems live look like?
It probably looks like a Victorian farmhouse with feet.

Who/what helped you build the house where your poems live and what is the house made of?
I was raised by a real Bohemian, single mother, (writer and artist, Abigail Stone) whose creative compulsiveness demanded a constant communication with writing and art. Being a good creative writer was more important than doing well in school. And a Bohemian single mother raised my mother (Ruth Stone), one who managed to support herself and her children (and us) with poetry. The houses they lived in were so important to their respective creativity—because, being artists, there is a lack of job security. It becomes very important to have a base in times of famine. And a private space to create in. The houses were extensions of the women in my family. Walking into the house is like walking into my mom’s brain, or grandma’s brain. And mom and grandma are the ones who laid down the foundation of my house where my poems live, with this same spirit. And of course, the house my poems live in is made of good wood. It’s made of cigarette smoke and dust and plaster. It’s made of cat hair. It’s made of wood smoke and creosote. It’s got a lot of old things in it. Antiques, all piled up, everywhere. Lots of rocking chairs with busted caning….

What does the house where your poems live sound like?
Like the rumbling approach of a thunderstorm and a beer being cracked open.

What object collects the least amount of dust in the house where your poems live?
The wind? And the cat.

Who is always crashing on the couch in the house where your poems live?
My mother. Except she’s always saying “I’m never there!”

And then of course, the nebulous other half of my own psyche. She’s always showing up! The weird self that breaks down the door and then carefully puts it back together again.

In poetry there seems so often to be this version of a self. Not Evil-You, but the part of you that you don’t quite fathom.

I think it’s interesting and appropriate to think of my poems as living in a house. But it’s possible that poems could be nomads, too. I’m not sure what mine are. I am so attracted to houses in general. I like spaces, and how they reflect the person living there. I want my poems to live in a house that continues to be rearranged, nodding to the past but always evolving. I hope that my poems don’t just stay in one house forever. I want them to keep an open mind about moving, if they see more possibly in a different space.

Where do your poems go when they leave the house?
They go on a joy ride. They stop by the House of Prose (a little ordinary on the outside, but very wild in certain wings); they roar along the BQE in Brooklyn listening to Beyoncé. They wind up getting a bottle of wine and spending the night at the House of Drawing (very sprawling and messy), and wake up feeling hopeful.

Or they go way out into outer space with Neil DeGrasse Tyson.

Bianca Stone will be performing at JustBuffalo’s Silo City Reading Series on Saturday August 29th along with poet Emily Anderson, musician Julie Byrne, and intermedia artist NP who will be providing a site-specific installation.  The event is free, open to the public, and will take place in Silo City’s Marine A (Silo City, Ohio St at Silo City Row, Buffalo) at 7pm.