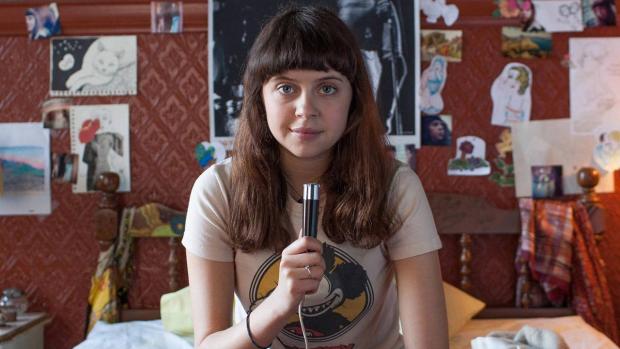 Accepting an award as Rising Star of the Niagara Integrated Film Festival a few months back, young actress Bel Powley spoke of how she was attracted to the lead role in The Diary of a Teenage Girl because she never saw any movies when she was a teenager that reflected how her life felt. “I hope that teenage girls will be able to sneak into the theater,” she said,  “’cause I want them all to see it.”

That’s about the only way teen girls are likely to be able to see this film, at least until it gets to cable, etc., because it’s impossible to imagine any parent willing to sit through a movie about the sexual exploits of a 15-year-old girl with his or her own daughter in the next seat. Especially when the bulk of said exploits are with a man twice her age.

Adapted from Phoebe Gloeckner’s largely autobiographical novel about growing up in San Francisco in the 1970s, The Diary of a Teenage Girl wields its honesty like a weapon. Minnie lives with her younger sister Gretal in an apartment with their mother Charlotte (Kristen Wiig). Mom is no one’s ideal of a role model: If there is a stereotypical 1970s vice she doesn’t indulge (sloth among them), it must have been cut for length.

Charlotte’s boyfriend Monroe (Alexander Skarsgard, good in a part that couldn’t be any more different from his True Blood vampire) becomes the object of Minnie’s experimental gaze, and in no time at all she’s telling her audio diary, “I’ve just had sex! Holy shit!”

Neither this nor any of Minnie’s further experiments, which include a not-quite-intentional foray into prostitution, are presented exploitatively. The film was written and directed by a woman, Marielle Heller, who has been working with the material for awhile, having staged and starred in a version of it off-Broadway. And Minnie is nothing if not sympathetic, an artistic girl who thinks she’s unattractive because she doesn’t fit the standard paradigm. Powley, who will next be seen as the young Princess Margaret in A Royal Night Out, throws herself into the role the way you would only expect from a British actress, which she is. She’s reason enough to see a movie that otherwise does its damnedest to make you uncomfortable. It opens Friday at the Eastern Hills and North Park theaters.