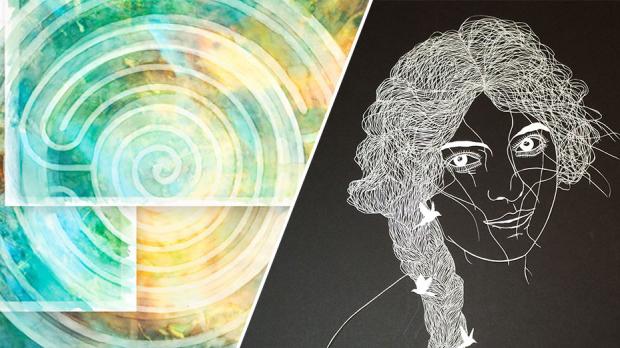 The current Buffalo Arts Studio show features spectacular color by artist Allan Hebeler and spectacular white by artist Maude White. Not black and white. Just white. Cut-out paper in impossibly delicate mode, manner, technique, under clear glass. You could put it against a black wall background and have black and white, but the BAS installation has it against a pale blue wall background. But the cut-out paper is the issue. White paper.

The color works are in wild arrays of dark and dense watercolors for the most part, with occasional oil or acrylic overlays, on multiple separate paper sheets hung sometimes juxtaposed, sometimes partially overlapping, the imagery sometimes continuous from sheet to sheet, sometimes discontinuous. The largest of these works stretch out to maybe 10 feet in length. These are landscapes by and large, in vivid impressionistic style in intense reds and yellows and browns, but no conceivable hue is missing from the mix. A little the effect in terms of subject matter and coloristics of Monet’s Giverny gardens paintings, a little the effect in terms of the way they stretch out along the gallery wall of the panorama presentation of the Giverny paintings in the Orangerie.

The Expulsion by Allan Heberer.

Other paintings by Hebeler are on mythological themes. Personal interpretations or permutations or combinations of disparate myth stories. For example, a work called Doris and Daedalus, an obscure Greek myth figure and more celebrated one, but not particularly associated. Daedalus the prototype artist—maker—who created the labyrinth on the island of Crete to hide the Minotaur, and in a later episode, made wings of wax and feathers to allow him and son Icarus to escape the island. Icarus flew too high and close to the sun, and the wax melted, and he fell into the sea and drowned. Daedalus—older and smarter—made it to mainland. Doris was the wife of Nereus—the old man of the sea—and mother of the Nereids, sea nymphs.

The work is on four partially overlapping paper sheets but with continuous imagery, one sheet to the next. The imagery comprises portions of a human figure—possibly female, possibly Doris—but just the head and lower legs and feet visible, overlain from neck to knees by a pallid labyrinth, and human figure portions—the head and feet—underlain by smaller labyrinths, or maybe just concentric circles, but around the head suggesting a halo. Holiness, divinity.

Several other works are about gardens. One of them about the original garden in Eden. Two others possibly also about Eden. (At least inasmuch as all gardens are somehow about Eden.) The clearly about Eden work is called Expulsion. In three sections—so a kind of triptych—with central portion tangle of unkempt grasses, and male and female figures to either side. The possibly also Eden garden works—called Garden I and Garden II—comprising tangles of vegetation again, with fruits—apples, grapes—and other less identifiable edibles on what look like dinner plates. And a human figure of sorts, maybe also on a plate? But visually very beautiful. Lush hues.

Remember and Forgive by Maude White.

Not art for art’s sake, but art for paper’s sake, is how Maude White describes her cut-out paper works. Her purpose, she says, “to make visible the stories every piece of paper attempts to communicate to us.” Like Michelangelo’s idea about sculpture. The sculptor’s job to remove the parts of the marble block that are not the statue.