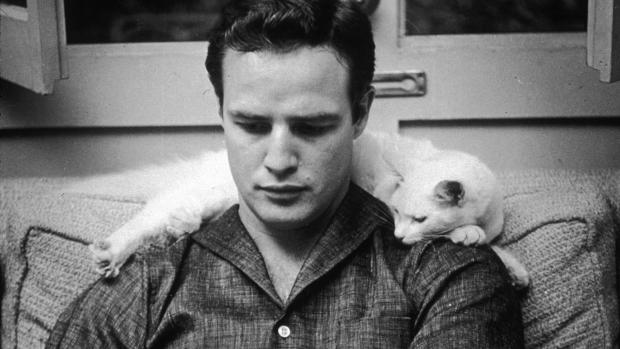 In the last few decades of his life, Marlon Brando never missed an opportunity to put down the craft of acting. In the new high-concept documentary Listen to Me Marlon (opening Friday at the Amherst Theatre), Brando gets a post-mortem chance once again to weigh in on acting—praising it at some points and bashing it at others.

His contradictory feelings about the profession he once summarized as “lying for a living” take up a small but significant part of the picture, as they illustrate its main flaw, that you could never rely on the errant-talker that was Brando for a coherent, linear statement on anything. Filmmaker Stevan Riley has done an admirable job of boiling down hundreds of audio cassettes that Brando left behind, the most cogent of which were made for his partially ghosted autobiography Songs My Mother Taught Me. The result has the semblance of a biographical portrait, but Brando’s own intransigence and capricious turns of mind—the same assets that made him both the best but often the laziest actor of his generation—prevent the film from providing a definitive objective portrait of its subject.

Listen to Me Marlon fits snugly into the small but growing class of documentaries that basically illustrate audio material. Riley clearly had the full cooperation of the Brando estate, plus ample financial resources (courtesy of the film’s distribution company, Showtime Films), enabling him to use material from Brando’s most famous films. What seem like several hundred small segments of Brando speaking are overlaid with rare photos and home movies (including color footage of the On the Waterfront set and Brando being mobbed by girls a la Sinatra and Elvis at the Guys and Dolls premiere); these alternate with more pedestrian “country scenes” and chronologically accurate photos and footage of New York City and Los Angeles.

Riley’s attempt to assemble a narrative out of several decades’ worth of tapes means that Brando’s voice ages and then become young again from scene to scene, frequently even from line to line. Thus we hear an aged, weary Brando (he died in 2004 at the age of 80) talking about a topic, followed by a younger, livelier Marlon talking about the same topic with a different tone and cadence. (Even at their most honest, these tapes do comprise “performances” of a kind—watching the film, one is certain he intended for the tapes to be heard by an audience).

The audio montage that Riley has assembled concentrates primarily on Brando speaking about his parents (his father was a hard-ass who never showed signs of affection; his mother a more sensitive alcoholic) and thoughts about subjects that are part of his mythology: his passion for civil rights and the plight of the Native American, his love of the Tahitian people, his sadness that he was such an absent parent, and his loathing for the trappings of fame. Because of the chronological shuffling of the audio materials in the film, one can’t be certain if the older Brando had any positive feelings for his work as an actor; as it stands, Riley puts positive comments about the craft earlier on and places Brando’s condemnations of acting later in the film (“there’s no art…it’s all bullshit”).

Although the film’s attempted chronological structure should make it a decent “101” for those who only know Brando from The Godfather and the iconic images from his early Fifties movies, Listen to Me Marlon will be best enjoyed by those viewers who know his work well. The only non-fans who will be truly interested are younger actors who might be interested by the little gems of advice that crop up in Brando’s verbal rambling (“you have to know your subject…you have to know your character”) and comments about the creation of his best-known roles (Stanley Kowalski, Terry Malloy, Don Corleone, and Paul from Last Tango in Paris).

The main impression left by Listen to Me Marlon is that, despite his wealth and publicly blasé attitude, Brando was extremely unhappy. This lends a bittersweet, almost Citizen Kane-ish aspect to the way in which the film is framed: Riley begins and ends the film with taped experiments in self-hypnosis in which Brando tried to calm himself down and welcome sleep by remembering isolated happy incidents from his childhood.