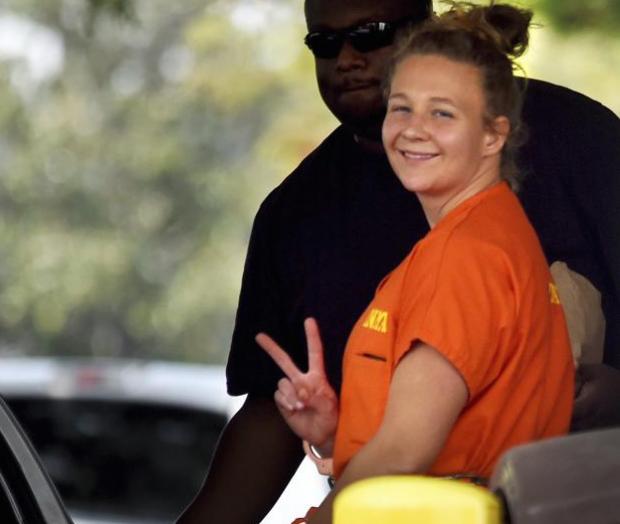 Late Thursday morning at the US courthouse in Augusta, Georgia, Chief District Judge J. Randal Hall sentenced 26-year-old Reality Winner to 63 months followed by three years supervised release, the longest imprisonment of a federal defendant for a disclosure to the media ever. Winner had earlier this summer pleaded guilty in the Trump administration’s first espionage case against a domestic whistleblower.

After a year-plus in pretrial confinement for snailmailing a top-secret National Security Agency document to The Intercept, Winner was brought into the court handcuffed, escorted by an outsize pack of federal marshals. Her ordeal behind bars, where food options are severely limited, has not brought the vegan yoga teacher to give in and eat animals or their products, her mother Billie J. Winner-Davis told The Public. This lack of adequate nutrition—the jail’s fault, not the diet-philosophy’s per se—might explain her visibly weakened physical state relative to earlier photographs, but nevertheless, Winner walked tall and solemnly to the defense table, where she sat down to have her cuffs removed. As the gravity settling in silenced everyone, a slight smile crept up on the corner of her mouth, one that seemed aimed as much at herself as at her supporters in the gallery. News of Winner’s stunning revelation of Russian military hacker efforts to breach the VR Systems election vendor in Florida and others had encouraged roughly 40 people to attend this fateful hearing.

Judge Hall entered from his chambers through and seated himself in his high-backed chair, wood Doric columns framing his raised bench and a coffered, colonnaded half dome crowning his impervious space. He called the hearing into session. An objection was briefly made by the millenial’s side regarding the pre-sentencing investigation; their opponents said they wouldn’t contest the matter. Then the former Pluribus International contractor and two of her lawyers—John C. Bell, Jr. and Joe D. Whitley—came up to the podium. Now Winner stood, bookended by her taller attorneys, with her uncuffed hands still clasped behind her back, save for an occasional brushing of her blonde hair. The main components of this newest proceeding in the movement were underway.

Before her sentence, would the Millenial express remorse or would she speak out in favor of leaks? Lengthy excerpts from a Facebook chat between her and her sister, read out by FBI special agent Justin C. Garrick and prosecutor Jennifer Solari at a  previous hearing, made the latter seem a distinct possibility. In addition to Winner calling capitalism “﻿the downfall of the environment” (and wrongly saying the United States invented that economic system), she told her sister that Vault 7, a WikiLeaks publication about CIA surveillance, was “so awesome” and the megaleak publisher “crippled the program.” Brittany Winner asked her if she was on WikiLeaks boss Julian “Assange’s side”; Reality replied, “Yes. And Snowden,” referring to 2013’s NSA whistleblower. But had strip-searches and other degradations by the authorities before trial changed Winner’s mind? What of the influence of her father’s death, half a year prior to The Intercept publishing its discussion of the classified report in June 2017?

When Winner’s lawyers addressed Hall in hopes he would accept the 63 months on which the prosecution and defense had agreed—rather than imprison their client for the 10-year maximum penalty—answers began to become clear. Bell spoke in a Southern drawl about how despite his familiarity “with the imperfectability of mankind,” he has been “quite impressed with her as a person” and about how her “acceptance of responsibility”—doing something she knew “she should not have done”—was “really what she wants to do.” Whitley spoke next, thanking “people here from the intelligence community” for their professionalism, applauding the Air Force veteran for a commendation she received for assisting remotely the “removal of more than 100 enemies from the battlefield,” and asking that Winner be incarcerated at Federal Medical Center Carswell in Texas for proximity to her family, participation in an inmate helper program, and safety. Hall listened nodding sympathetically, and at last it was time for Winner to have her say.

“I’d like to apologize profusely,” the defendant told the judge, “for my actions and apologize especially to my family: My actions were a betrayal of my country.” She spoke from a prepared statement that has not been released but has been transcribed as faithfully as possible. Among other things, she added, “Losing nearly everything has taught me nothing can replace time spent with loved ones.” Winner spoke of the September 11 tragedy, the intellectual responsibility to research and find answers about the cultures involved, and how her “unique father” expected, despite his “trouble with the law, opioids, and questionable philosophies,” that his children “engage in intellectual discourse by the time they were out of diapers.” The multilingual defendant told the judge “in school my favorite subject was Latin—the study of the very structure of language itself.” She spoke of wanting to work for nonprofits someday, and said in prison she wants to seek treatment for depression and bulimia, as the “eating disorder is a constant challenge for me” and not receiving proper mental healthcare in prison is a great fear of hers. Winner also said she was “looking forward to the day when compassion meets strategy.”

The prosecution had its turn next: Solari spoke as if the agreed 63 months was a generous offer and made it plain she herself was an enemy of free speech. Besides saying that agreeing to the plea deal let the government withhold further classified information from a jury (that is, we add, the public), Solari said the defendant had a security clearance for six years and, essentially, knew what she was getting into, and that “what she was doing was against the law,” as if society’s rules are made never to be broken. Solari even added that “US subject matter experts determined this quote, disclosure, unquote”—as though it wasn’t even a leak, as though leaks are only permissible when a general like David Petraeus discloses for personal gain, gets a slap on the wrist, and walks free and moneyed—“caused exceptionally grave damage to our national security.”

What is this alleged damage to so-called national security from Winner’s gift? It is not commonly understood, as long-time elections integrity activist Bev Harris explained to The Public, that the computer attacks Winner’s disclosure reveals are part of the same attacks that make up the last count in special counsel Robert Mueller’s 12 Russians indictment. That means Winner’s deed and file are not some tiny drop of water into a vast pool of political confusion but a massive leap onto the world stage that is being all too much ignored.

Prosecutor Solari’s concern might match that of Harris, founder of BlackBoxVoting.org: that the defendant’s disclosure could jeopardize the ongoing criminal investigation into Russia’s election-hacking, but The Public received a bolder view—that Winner facilitated rather than harmed the ongoing investigation into Russia’s election-hacking—from ex-WikiLeaker Heather Marsh, whose appearance on a censored Oxford Union whistleblowing panel we helped document, where she said institutional power for networked caregivers of the land and of communities is true security for nations. Marsh told us, “﻿Absolutely Winner is a whistleblower. She sacrificed her freedom to alert people in the United States and around the world that their democracies were being compromised. She alerted the public to this a year before the indictment. Without her actions, there may not have been enough public pressure and support for the investigation to even occur. Without public interest, generated in part by the evidence in this leak, the entire investigation could have quietly disappeared and the public would never have been any wiser.”

The Public asked also Marsh, who as former editor of WikiLeaks Central studied world events through diplomatic cable after diplomatic cable, uprising after uprising, to explain the significance of Winner’s disclosed document for everyday folks in the United States:

This document is more than just evidence of Russian interference. In many ways, the US election is a high-profile, long-term investigation into the nature of how democracies work today. Opinions are manipulated by organizations such as Cambridge Analytica in conjunction with intelligence collection by organizations such as Wikistrat. These are problems which have plagued all democracies for years now—Canada’s 2011 voter suppression robocalls and Andrés Sepúlveda’s decade-long manipulation of Latin American elections are two earlier reported examples of modern election interference. The document Reality Winner leaked shows how easy it is for the same methods used by politicians and lobbyists domestically to be used by any interested party, whether that is a foreign state, corporate interests, criminal organizations, or all three. Neither are these methods limited to elections—the same social manipulation is used to direct our decisions in every aspect of our daily lives, from consumption to our reaction to human rights violations. This type of manipulation, what I call seductive coercion, is our true governance. Winner’s bravery helped expose the true nature of our governance today. This is information we all need to be able to address the problems facing democracy in the future.

The judge did not see the future that way: After the prosecution spoke of its accusation that the millenial’s leak had harmed the United States exceptionally, Hall imposed his sentence for a single count, willful retention and transmission of national defense information, sending Winner to FMC Carswell.

Outside the courthouse, US Attorney Bobby L. Christine, a tall, broad-shouldered man with a grey crew cut who looked straight out of central casting, called Winner “﻿the quintessential example of an insider threat,” but her friends and family, walking peacefully down the sidewalk away from the courthouse and its high walls, had pleasanter thoughts. Winner’s former cellmate and friend Mikaela Uscanga, aware for the first time of the sentence, told The Public that Winner “did get what she wanted.” The Public then asked Winner’s mother Billie J. Winner-Davis, who seemed tightly focused even after more than a year defending her daughter, about the relationship between Winner’s courtroom apology and her sentencing statement’s great line—that she is “looking forward to the day when compassion meets strategy.”

“I think she’s really sorry” about the disclosure, Winner-Davis told us, but added, “She has a way with words, doesn’t she?”

Before stepping into the vehicle to begin her sentence, Winner gave a big smile to reporters and flashed a peace sign.