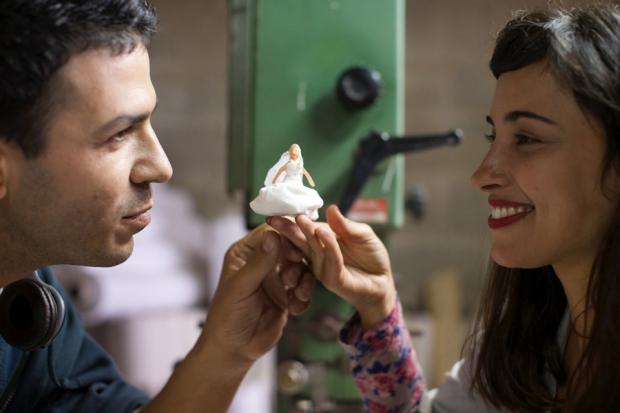 At long last, a very good week to go to the movies. On top of a handful of regular openings worth your attention, there are two series opening at the Dipson Amherst and a whole bunch of fill-ins at the North Park, enough that you could see something worth your while every night for the next week.

The two best films of the week are notable for the slightness and precision of their scale: Each clocking in at less than 85 minutes, they are models of economical filmmaking based on a clear sense of what the movie wants to accomplish.

From Israel, Wedding Doll is the story of Hagit (Moran Rosenblatt), age 24, who lives with her mother in an apartment in a small town on the edge of the Negev Desert. We first see her in the pre dawn, fashioning primitive little dolls of brides from sticks and what we later learn is toilet paper. She works at a small paper factory, and seems happy in her life, with a big toothy smile that is never far from the surface. It’s the way her mother Sara (Assi Levy) hovers protectively around her that tips us off that something isn’t right with Hagit. Whether due to a learning disability or a youthful traumatic injury, she is of diminished capacity, and Sara has given her life to caring for her. That job has grown increasingly difficult, as Hagit’s craving for independence conflicts with her inability to care for her own needs. When the factory where she works announces it will close, it appears that she may have to go to live in a state facility. Writer-director Nitzan Giladi has fashioned a showcase for two excellent performances, matched by other performers in smaller roles. He uses the beautiful but bleak locale, a place where nothing seems to grow, to good effect. The film’s only fault is a finale that plays more melodramatically than it needed to: perhaps Giladi didn’t realize how much this character would succeed in touching audience’s hearts.

Southside with You charts the course of a day spent together by two young people in Chicago in 1989. It’s a date, even though she is determined that they not call it that: they work together, she supervises him, and she doesn’t want word to get around that she is so unserious as to fall for a summer intern. That she is a black woman working at a corporate law firm makes her anxiety understandable: She feels under a microscope no matter what she does. But he is determined to put his best side to her now that he has gotten her away from the office: it might be the only chance he gets.

Like Richard Linklater’s Before Sunrise and its sequels, Southside with You understands that conversation between a pair of intelligent young people getting to know each other offers richer dramatic possibilities than any computer-generated superhero battle. With charming performances by Tika Sumpter and Parker Sawyers, a knowing use of Chicago locations, and a script filled with optimistic empathy for the struggles of young African-Americans looking to make a way for themselves in the world, Southside with You is such an appealing small film that it barely matters that the couple are Barack Obama and his future wife Michelle. The movie isn’t hagiography: It has no agenda in promoting a political position, and I don’t know to what degree it has been researched by writer-director Richard Tanne or created from whole cloth. I feel bad for anyone who would avoid it on the basis of political considerations.

It’s usual for films about real characters to include in the end credits a disclaimer stating that while some characters you have just seen were inspired by real people, others are composites or creations for dramatic purposes, as were some of the situations. In other words, lawyer fudge written to discourage lawsuits. If you stick around to the end of Hands of Stone, you will see the standard disclaimer found in fictional films stating that all of the characters and situations you have just seen are fictitious. Which is odd, given that the movie is a biography of the world champion boxer Roberto Duran and includes a number of people who are very obviously not fictitious.

Whatever. I try not to research the true stories after seeing a movie like this because it just makes a lot of work for me and provides no clear benefit. I will leave it to boxing fans—I am not one—to pick apart this biopic for moments where it strays from the public record. Suffice to say that the story of the boxer from Panama is a perfect vehicle for the talented but under-recognized actor Edgar Ramírez, that Robert De Niro has one of his better recent roles as Ray Arcel, the trainer who came out of a Mafia-dictated retirement to coach Duran, and that singer Usher has a notable supporting role as Sugar Ray Leonard. Filming largely in Panama with substantial support from the government, writer-director Jonathan Jakubowicz works to tie Duran’s popularity with that country’s struggle for respect and self-determination in the last half-century.