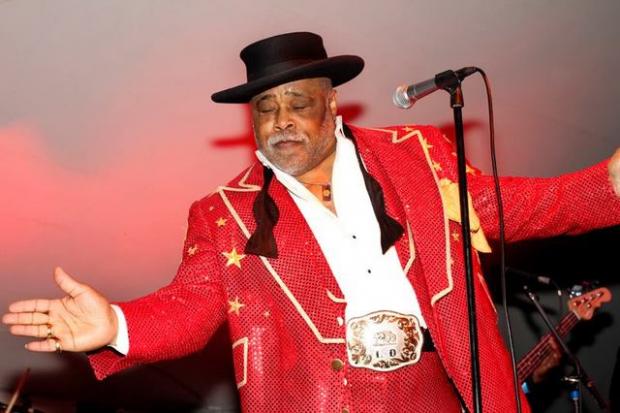 Lance Diamond was not, if you give it any thought, a great singer. But then he didn’t have to be, as the decades he spent performing for Buffalo fans attests. He was an entertainer, leading a rock and soul revue from the late 1960s until his death at the beginning of 2015. He had dozens of suits that he couldn’t sit down in, and wore a few of them at every show. Like Roger Daltry, he knew that there were a lot of things you could do with a microphone besides simply singing into it.

It’s hard to imagine that anyone reading this never saw Diamond working the stage at the Elmwood Lounge (later Milkies), where he owned the weekend for 30 years. But if you never did, the new documentary A Diamond in the Buff will show you what you missed.

I wonder if co-directors Kevin Polowy and Brandon Rae know that the film’s title is also a position in the Kama Sutra? From the evidence of the numbers of women he entertained on a  personal level over the years, I’ll bet the subject of their film did. And while you’re pondering that, take a moment to appreciate the ridiculous brazenness of that stage name, assumed in the late 1960s: Lance Diamond. (His backup singers were the Family Jewels.) It’s no wonder that white club owners—and for much of Diamond’s career, clubs were either black or white—who booked him were surprised to find the man was black.

Polowy and Rae spent a few years researching their documentary, and got Diamond to sit for a few rare interviews. His surviving sisters cooperated with filming, as did Robby Takac of the Goo Goo Dolls, who used Diamond as a featured vocalist on some of their early recordings.

The result pulls back the curtain a bit on Diamond’s life, though not so much that you’ll feel disrespectful for it. He apparently never married or had children, preferring to save his energies for the stage. He had offers to leave Buffalo and hit the road, but turned them down. Was it because he loved Buffalo as much as he did, or was it for fear of ending up a small fish in a big pond like Vegas? We may never know that for sure. But his career made him an integral part of this city, and it’s hard not to smile when you remember him. A Diamond in the Buff will play for a week at the North Park.

The indie crime drama Good Time was titled from the same frame of mind that nicknames bald men Curly and fat guys Slim. This isn’t to say that the film isn’t bracing to watch—whether you would want to use the word “enjoyable” depends entirely on your tastes. But there’s no question that no on in it is having anything that could remotely be called a good time.

At the center of this hellish night in some of the less savory areas of Queens, New York is Constance Nikas, played by Robert Pattinson in what looked to me like a pitch-perfect Vincent Gallo impression. Which is to say, about as far as it is possible to get from Edward Cullen, the sparkling vampire who set teenage hearts a-flutter in the Twilight movies.

Connie is a lowlife whose primary redeeming characteristic is his devotion to his mentally challenged brother, Nick. Said brother is played by Benny Safdie, who co-directed the movie with his real brother Josh, and before Pattinson makes his entrance he all but steals the movie in a short scene being questioned by a psychiatric doctor.

Connie’s goal is to get his brother out of the facility where he feels Nick has been unjustly committed (though viewers may feel he’s right where he should be). This starts him out on a 24-hour descent into hell that makes up in velocity what it lacks in plausibility. You can’t help but compare it to Quentin Tarantino’s Reservoir Dogs—especially during a third act tangent that threatens to take over the movie—but with less florid dialogue and more grit. And if you come away from it with nothing else, Pattinson’s performance is solid enough to make you forgive him those vampire movies: everyone has to start somewhere.

Birth of the Dragon is not one of those Game of Thrones spinoffs you’ve been hearing about, but rather a story based on the early life of Bruce Lee in San Francisco. The Game of Thrones option would have been more plausible. Lee gets turned into a supporting player in his own story, which focuses on Billy Magnussen as an aspiring martial artist who gets mixed up in a Chinatown battle that pits Lee (Philip Ng) against kung fu master Wong Jack Man (Yu Xia). On its own merits it’s an undistinguished action drama. As cultural appropriation, it’s a slap in the face to the very audience that might have been expected to see it.