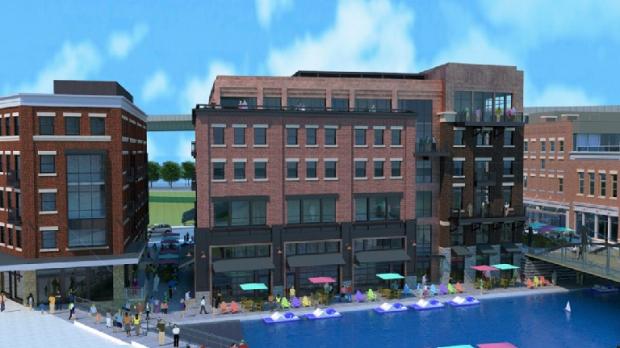 Hey, Buffalo, did you see the news about Nick Sinatra’s deal with the Erie County Harbor Development Corporation to build two buildings at Canalside?

Can someone explain to me how this bullshit RFP process to select a designated developer is a proper utilization of government power? Because what really should be happening is that the government builds out the streets, ensures that the necessary utilities are in place, does whatever environmental remediation is needed, and codifies whatever zoning and design restrictions to which it wants the prospective buyers to adhere. That. ls. It.

The state should have simply made the parcels “shovel-ready” and then auctioned off or sold the individual properties. Let Sinatra compete in the open market against Paladino and Savarino and the Montantes and Pegulas and whomever else is interested.

What’s happened here is that uniquely “New York” way of doing business, which—if it isn’t expressly and directly corrupt—is nevertheless covered in a sheen of Albany sleaze. This award by the ECHDC board allows for subjective opinion and corruption to flourish. I’m not accusing this award to Sinatra of being corrupt, per se; but it’s that same opaque Albany process that leaves Utica factories empty, and leads to convictions of people close to the governor.

The South Aud Block is now done, and the North Aud Block is going to be under consideration next, and the developer designation there will also be awarded in a process that has the appearance of transparency, but isn’t based on objective criteria. Think about it: Canalside is now a decade old, and as great as it is, it’s still just a lawn with summertime temporary tents for concerts, and morning yoga programming. The whole thing was hijacked by a farcical “placemaking” process to hinder development of long-extant master plans, and instead “lighter, quicker, cheaper” quickly revealed itself to be “grass, tents, and no toilets.” Until now, the most significant structure has been the snack shack. How has it taken a decade to get to the point where an actual proper building—the Children’s Museum—is finally going up?

That’s easy: Planning by committee is a slow enough process in the private sector, but grinds to a snail’s pace when it’s done by a public benefit corporation run by a state authority—it’s why the only Roy Rogerses in Christendom are on property run by the Thruway Authority. It’s shit food for a captive audience—no one with any sense or choice would voluntarily eat poor food served in an apathetic atmosphere.

Every big developer in Buffalo is politically connected, and a massive donor to all and sundry. In the wake of what happened with Ciminelli, you’d think these people would be reticent about even setting up an opportunity for bid-rigging. I look forward to the North Aud block project being awarded to another predictable company.

There’s a well-documented fraud being perpetrated upon the voters of the will-be-gone-by-2022 27th Congressional District. As a preliminary matter, it is by no means a guarantee that the Republicans will be able to remove Chris Collins from the November ballot and replace him with someone else. They may be stuck with him, and they very rightly should be. Collins can’t simply move out of state, and his mere indictment isn’t enough to disqualify him.

The only way the eight Republican county chairs touching NY-27 can arguably replace Collins is to devise some fraudulent scheme to do so. That’s why we are left with rumors that Collins may be shunted into some picayune campaign for town clerk in Amherst or Elma, or some town position in Clarence. What self-respecting town committee would sacrifice itself for this (alleged) crook?

In the meantime, there are now 11 GOP candidates coming to Batavia to kiss the rings of the bosses of the eight families, and looking to curry especial favor with the boss of bosses in the Erie County GOP. They’re making no bones about it: They want someone with name recognition and an ability to raise a million bucks. That’s a tall order—most have one, but not the other.

What this is can be simply described: It’s a ruse and a plot and a scheme—a fake, phony fraud to jettison Collins, a guy they were telling us was fantastic just two short weeks ago but is now the embodiment of poison itself. The amazing part of all of this is that they knew Collins was, at best, ethically challenged with his puffery of Innate stock, and using his official post to help Innate in its private business dealings in the US. Yet, they dutifully endorsed him anyway, all the while insisting that the accusations were false. They could have had a come-to-Jesus talk with Collins a year ago. Maybe Collins could have, I dunno, let someone know about the target letter he certainly received from the Feds. You don’t spend a quarter-million dollars on DC attorneys if you’re not in serious legal peril.

Instead, the Republicans in NY-27 left the vetting of their candidate to the Democrats and the Department of Justice. And this is what they get—a fraudulent scramble to circumvent the rules and crown some Albany seat-moistener (or similar) to Congress, and trick their own constituency.