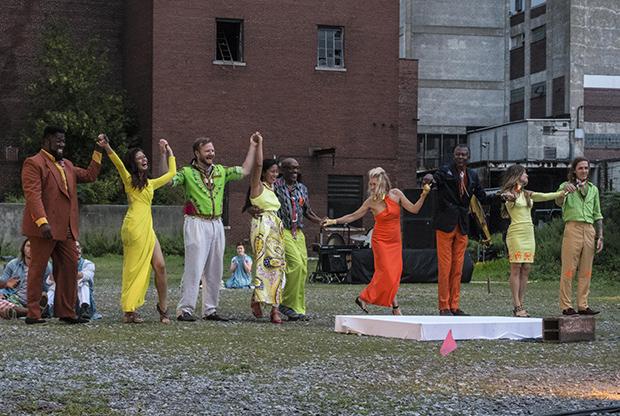 The Gathering, the Torn Space Theater production written and directed by Torn Space co-founders Dan Shanahan and Melissa Meola, which had a two-day run at Silo City August 18 and 19, was not only superb theater but also a brilliant use of derelict industrial space and of the night itself.

The production had a cast of 43 named performers, plus the Lancaster High School Marching Band and Color Guard, the drivers of two Caterpillar backhoes and one bulldozer, and maybe a dozen members of the audience.

In most theatrical performances, the largest visible space is occupied by the audience; the action takes place in a smaller area on a floor or a stage. For this production at Silo City, Torn Space inverted that relationship. The performance took place in the field between American Grain Elevator on the left, Perot Malting Elevator on the right, and Perot Grain Elevator directly ahead. That is normally an open area, but bleachers separated it from the part of the field closest to the road leading out to Ohio street. Several food trucks lined that space, creating a kind of lobby for the production. The distance from the front row of the bleachers to the small area in front of Perot Elevator where part of the action took place is 150 feet. The space separating the Malting and American Elevators is about 140 feet.

As the audience slowly filled the bleachers, members of the cast milled about, apparently randomly, in the large field. People walked, danced, drifted together, then apart. Similar costumes occasionally grouped together: three men in red sweat suits; several men and women in half-sarongs; two women in long dresses, one bright orange, the other bright yellow, both slit nearly to the hip.  After a while, it was clear that the moving wasn’t at all random. There were rules, but they felt like the rules in a John Cage composition: “for the next twelve bars, horn players can play any notes they like, so long as they are between B-flat and G-sharp.”

Just before an announcer said the play was about to begin, several people who had been at the VIP reception in Marine A earlier arrived and took their seats in the bleachers. They were wearing brightly-colored leis. After a while, what seemed to be a dinner party started at a table 150 feet away, close to Perot Grain Elevator. Two carts—the kind that ferries people with walking problems around large airports—took those members of the audience to a place near the party. A while later, it brought them back, and they again took their seats in the bleachers.

During the milling phase, a drone moved around the entire area. It seemed to be documenting the action in the field. Sometimes it approached the bleachers. As the sky darkened, the drone, because of its bright red and green running lights, became ever more obvious. It spent more and more time hovering directly in front of the seating area, not documenting the performance but subjecting the audience to obvious surveillance.

As evening fell, a large pattern of light, then a few circles of light were projected on the old section of American Elevator (the section closest to the river). After a while, the projection moved to the newer section, the one behind the audience, back where the food trucks had been. Instead of abstract figures, the projected images now included bodies.

Moving the projections behind and beyond the seating area, involving members of the audience in part of the action, and turning what seemed a commonplace documentary action into an act of surveillance had the net effect of abrogating the ordinary disjunction between audience and actors. At first, the “stage” was that entire field in front of the bleachers; after a while, the bleachers and the people sitting in them were in the imaginative space itself.

The distant party was based on the 1998 Danish film, Festen, directed by Thomas Vinterberg (the first Dogma 95 film). The film’s U.S. title was The Celebration. It was adapted for the British theater, with the original title, by David Eldridge, and was first staged in 2004. Both play and film are about a family assembling to celebrate the father’s 60th birthday. During much of the performance, sounds of the people at the table were amplified through speakers. They could be heard better than they could be seen, but it was all but impossible to make out words: it was like a noisy group across the room in a restaurant. Then, late in production, two of the dancers turned a small white platform on its narrow side and the platform became a screen only a few feet from the audience. On it, the son (played by Johnny Toohill) of the man having the birthday reads a speech in which he accuses the father of having sexually abused him and his sister when they were children. Then the party continued, as before.

The play takes several bits and pieces from other times and places and resituates them, demanding another kind of attention and response:

—It opens with Dudney Joseph singing, a capella, Jane Hirschfield’s poem “Let them not say” to the tune of “The Battle Hymn of the Republic.” The first verse goes:

—A woman’s voice recites the years we’ve been at war since 9/11.

—That same voice recites the famous 1984 Ronald Reagan commercial, “Morning in America.” (The phrase was used by both Mario Rubio and Ted Cruz in their 2016 primary campaigns. Hillary Clinton mentioned it in her Democratic nomination acceptance speech.)

—A young woman with a flag engages in a strange dance with a bulldozer that channels the movements of a young man defying a tank column in Beijing’s Tiananmen Square in Beijing in June 1989.

—Three young men in red sweat suits who had been part of the milling-about earlier, stand atop a two-tiered box; then the two black men raise their arms.

Afterward, a friend said, “What could younger people in that audience make of the 1968 Olympics protest or the Checkers speech or the Tiananmen Square bit?” He and I are old enough to have seen and heard those things when they happened, but they’re still very much in the culture: Jeff Widener’s 1989 photo of “Tank Man,” and photos of Tommie Smith, John Carlos and Peter Norman at the 1968 Olympics have become iconic. And what does it matter where the text from Festen originates? It is about dark secrets brought into the angry present.

The evening was consistently sensual. A powerful sound system propelled the wonderful dancing and singing. The three performances by the Lancaster students were much closer to the audience than they would have been to a crowd at a football game.

The production utilized not only the space, but the night. The French call twilight entre chien et loup, “between the dog and the wolf,” between the domesticated and the wild. As twilight descended and then night foreclosed, it was loup time. Brilliant spotlights from the far end of the field pointed directly at the audience. The lights moved closer. They were mounted on two Caterpillar backhoes, which engaged in a roaring choreographed sequence that was simultaneously beautiful and terrifying. At one point the fronts of both backhoes rose six feet off the ground.

This is site-specific art. It was designed for that area in Silo City, for the particular sound quality that could be generated there, for the curved walls of the grain elevator on which the abstract and then specific figures were projected, for the space in front of and behind the bleachers where the large cast could dance and sing and the bulldozer and backhoes could move at will. It was a work about community, politics, celebration, resistance, time, politics and being in the present moment. It was great theater.

Bruce Jackson is an associate member of the New York experimental theater company, The Wooster Group. He is editor-at-large of The Public and a member of the UB faculty.