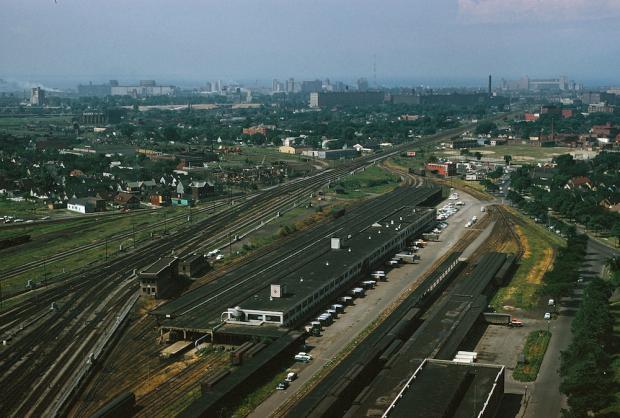 This view looking southwest from the Buffalo Central Terminal, taken in 1958, shows some familiar sights. At center, the Railway Express Agency building, built in 1917, is still in operation. It wouldn’t go dark until 1975, and came into City of Buffalo ownership in the 1990s after a planned warehouse and industrial operation, fueled by NAFTA hopes, fizzled. At left is William Street, east of Fillmore Avenue, and the neighborhood to its south. At the right, a tree-lined Memorial Drive. Visible in the distance is the Concrete Central Elevator, Cargill-S Elevator, I-190 (under construction), Larkin Terminal Warehouse, Seneca Industrial Center (still brick, prior to a 1962 re-cladding in concrete stucco), and Great Northern Elevator.