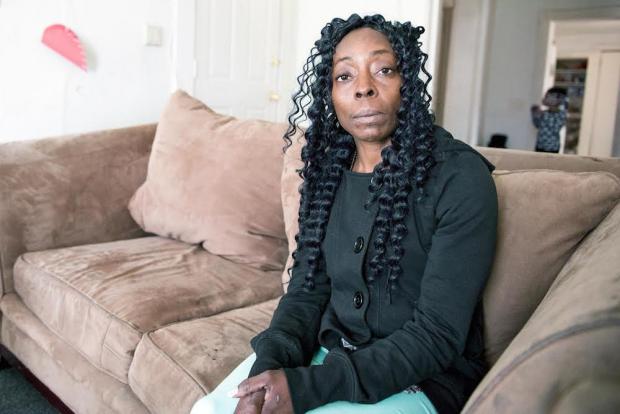 One of the convicted felon subjects of Errol Daniels’s photography exhibit about “re-entry after incarceration” pretty well summed up the sense and spirit of the work, describing one of the photos of himself as “a mugshot I can be proud of.”

The exhibit currently at CEPA is the result of a multi-year project by Daniels and writer collaborator Katherine Russell photographing and interviewing men and women who served sometimes decades-long prison terms, now back on the outside. A handful of photos of each ex-prisoner, in their current work and home environments. And changed radically, it would seem, from the often violent individuals they were when they were first caught up in the incarceration system. The changes not necessarily due to the system—or the change ratio overall would be much higher than it is—but more likely attributable to some remarkable personal inner resources and personal decisions on the part of the ex-inmates. Plus often magnanimous help—in material and spiritual terms—from their own brother and sister former prisoners, who in addition to their own struggles to survive in the outside world, work tirelessly in various supportive programs—many of which they started themselves and run themselves—to help the next person in line. Many of the show subjects are themselves active in support programs (a possible key factor in their own notable success in their post-prison rehabilitations).

The interview and photography project included about twenty former prisoners, about half of which—some live locally, some in other moderately distant locales, like New York City and New Jersey—were present at the show opening and took part in panel discussions on the project and prison life and prison aftermath. No one was less than candid and forthright about having committed the crime or crimes for which they were charged and convicted—except for one or two who affirmed they were innocent and wrongly convicted, and listening to them, it was palpable they were indeed wrongly convicted—but neither did anyone—not even the innocent who were wrongly convicted—dwell on the injustice or harshness of their sentences, but many spoke eloquently and convincingly about the misguidedness edging into cruelty and inhumanity of the system itself. How it seems much more geared to punishment and humiliation than genuine rehabilitation of prisoners. The inadequacy of counseling resources and job training programs in prison and afterwards, so that ex-prisoners find themselves in the same desperate financial conditions and untethered social situations that nurtured the criminal activities that got them into the system in the first place. The egregious overuse of solitary confinement as a supposed disciplinary method. The racial bias, inside even more than out.

A handsome book accompanies the exhibit, that includes many or most of the photos in the gallery show, together with text essays on each of the ex-inmates. Such as Jerome Wright, clearly an alpha figure, from the time of his earliest criminal activities among drug and mayhem gangs in the Bronx in the 1970s, then during his few decades in prison, and now on the outside. He served as emcee of the panel discussions at the opening. His in-prison activities resulted in significant solitary confinement periods, during one of which he and a cell neighbor—somehow they contrived to communicate through the solitary unit walls—held the first brainstorming sessions about a project to keep young people from heading down the same futile path they had traversed. Decades later, that initial brainstorming resulted in a program—called Mentoring and Nurturing, or M.A.N., for short—it’s ultimately about what constitutes real manhood, versus some macho street definition—is part of the curriculum for at-risk students in some Western New York schools. Wright is also an organizer for the Western New York Campaign for Alternatives to Isolated Confinement (i.e., solitary).

Or John Figueroa, who was incarcerated beginning at age 16 for 16 and a half years—including an incredible six straight years in solitary—and now runs a reentry program for ex-prisoners, a mentoring program for young people, and community training programs on topics such as gang intelligence in the workplace. Or Leonna Rose, an unstoppable type who seized educational and skills training opportunities wherever they occurred and refuses to accept or abide by the stereotype views society would apply to her as a woman and/or an ex-prisoner. Since incarceration she has worked productively and successfully in a variety of industrial and building trades jobs. Just that, as she says, “As a female, you have to work harder.” Or Tyrone Morgan, who spoke about the mugshot he could be proud of.

Profiles in courage and perseverance across the board. The CEPA exhibit continues through August 31.