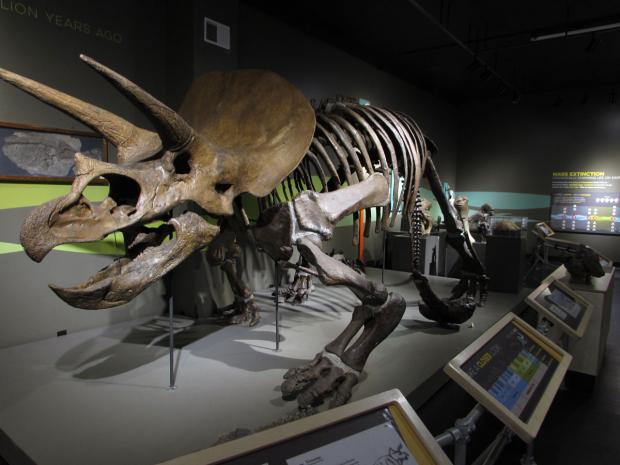 The Buffalo Museum of Science exhibit on species extinction is a little slow getting to the point, but makes it well enough at the end, with a wall copy quote in large type from Neil deGrasse Tyson: “The dinosaurs never saw that asteroid coming. What’s our excuse?”

(Not an excuse exactly, but the explanation, would be that there’s still a dollar to be made mining and burning fossil fuels, spewing CO2, polluting the air and the water. Business as usual. Let the next generations figure out how to live in the world we leave them. And hope they fare better than the dinosaurs.)

An exhibit in the wake of the recent revelation that we’re currently in the midst of the sixth mass extinction of living species in the history of the planet. The first occurred 440 million years ago and killed off about two-thirds of all then-living species, including lots of trilobites, one of the more advanced animal forms of the period. The last previous mass extinction was 66 million years ago and killed off the dinosaurs. (The revelation about the sixth extinction is largely from New Yorker science writer Elizabeth Kolbert’s recent book The Sixth Extinction: an Unnatural History, winner of this year’s Pulitzer Prize for general nonfiction.)

The exhibit starts out blandly enough, with information such as that “species extinction happens all the time,” that “99% of all species that ever lived are extinct,” and “many species become extinct before ever being discovered.” A little bit like the assertion that climate is always changing. So why all the fuss about climate change these days?

Two sides of the exhibit space. One a medley of kiosks and information stations on how scientists know about mass extinctions, and factors contributing to the present one. The other side—along one long wall of the exhibit hall—the nitty-gritty matter of the exhibit, a time line of the history of the earth, with large vertical punctuation arrows—like thunderbolts from the heavens—representing the different extinctions.

The medley side includes a tub of sandy material kids can play paleontologist in and dig up ancient animal bones, and for their parents or other elders, a video on ground-penetrating radar, one of the tools to inform real paleontologists where to dig.

A kiosk containing a score or so of mainly vanity items that account for the decimation of several large animal species, like the elephant, the rhino, various fur-bearing animals. A list of the most significant threat mechanisms to species—disease, pollution, invasive species, climate change, loss of habitat, and hunting, fishing, and poaching—but absent cogent explanation of how they’re pretty much all one thing. All part of the same human factor picture.

An impressive display on zebra mussels, on their fierce proliferation in Lake Erie, where they were first introduced only about twenty years ago and have now become one of the dominant species. A beautiful Marchand brothers diorama on a portion of coral reef and magnificent lobster passerby, and wall text on how coral reefs are faring worldwide. Tending toward the bland again. Morcels of good news interspersed among the horrible. “Currently 45% of the world’s coral reefs are healthy [and] enormous efforts from 36 countries are taking place to conserve and restore damaged reefs.” The obverse of which would be that 55 percent of them are dead or dying. Whereas just 200 years ago something like 100 percent of them were healthy. A hemi-demi-quaver in geological time.

The other side of the exhibit—the time line indicating the various mass extinctions—duly notes the causes of each. Many of the same causes. Tectonic plate movements, volcanic activity. And for the most recent previous extinction—the one that took out the dinosaurs—asteroids. Whereas, in the current case, entirely and incontestably man-made causes.

Climate change was a factor in most if not all the previous extinctions, but climate change that probably happened over millennia. Whereas the climate change happening today was unknown and unsuspected—to the non-climatologist layman at least—thirty years ago. Now the devastating likely weather effects are headline news each evening (though the meteorologists seldom if ever talk about climate change). Hurricanes, typhoons, tornadoes, droughts, floods.

The most appropriate response to the current mass extinction news would be alarm. Just short of panic. Mass extinction is a death sentence on the earth as we know it. And likely the human species as we know it. In large numbers. Inhabiting an up until now magnificently hospitable planet.

Meanwhile the majority faction of legislators of the main culprit nation in the matter remains dead set determined to keep the coal fires burning. One more thing to deny.