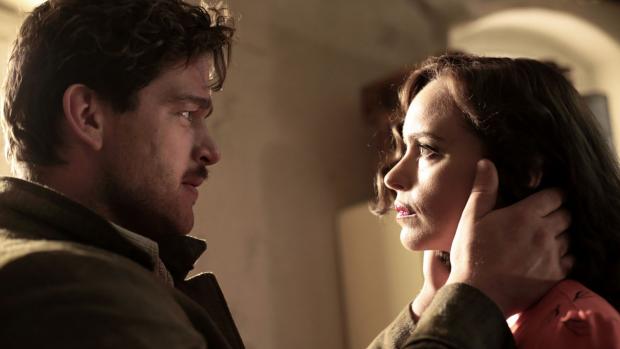 About a third of the way through Christian Petzold’s Phoenix, I thought of Anton Chekhov’s famous rule-of-thumb that guns introduced into a play’s first act are sure to be used later on. There’s also a moment near the end of the movie when it seems that this trajectory will be followed. But Petzold had something very different in mind. He was interested in the survival of love, hope, and life itself under unimaginably terrible circumstances. The gun can’t deliver these.

Phoenix is a post-Holocaust film, a rather different one than the relatively few that have addressed this material. It views it through the frame of one relationship, a marriage sundered by the rise of the Third Reich and the horrific consequences of its 12-year existence. Phoenix is also an unusual love story, and a sort of emotional triangle. Along its way, it provides an intimate small portrait of the struggle to recover in the immediate aftermath in Germany of the Second World War. It’s a tragic but quiet melodrama.

The film, co-written by Petzold and the late Harun Ferocki, follows the horror-beset journey of Nelly (Nina Hoss), just liberated by the allies from a Nazi death camp. She’s taken by Lene (Nina Kunzendorf), a refugee agency worker, to a hospital for facial reconstruction surgery to repair the damage done by a gunshot. She rejects the advice of the plastic surgeon and insists on her original appearance being restored as much as possible. We soon learn why this is so important.

She soon begins a quest through war-torn Berlin’s American sector for her husband Johnny (Ronald Zehrfeld). Before the war, she had been a cabaret performer and he was her pianist. She finds him waiting on tables in a club, but he doesn’t recognize her. He does think of a way to use her: He proposes she impersonate his presumably dead wife in order that they can collect an inheritance that would be due her as the sole survivor of her Jewish family.

With her reluctant agreement, he sets about coaching her to masquerade as her former self, changing her hair, makeup and even her walk. Meanwhile, Lene tries to coax Nelly into leaving Germany for British-controlled Palestine, to start a new Jewish life. Lene also collects some very damaging information about Johnny. It’s increasingly obvious that Lene’s interest is deeply personal.

Some of the critical response to Phoenix has referenced Hitchcock’s Vertigo, but Nelly is no Hitchcock character, and this movie is nowhere near the other one. Petzold’s approach is on another plane from Vertigo and the work of other genre-movie creators. There’s tension in Phoenix, but it’s largely implicit, almost subtextual. Petzold eschews nervous-making setups or payoffs. He soft-pedals overt suspense even as he builds up the plot around Johnny’s scheme and Nelly’s longing for signs of his recognition and love.

Petzold’s methods are doubtless well-motivated. His direction is economical and ungimmicky. But the script is too uncomplicated by detail; too much information is withheld or ignored. It’s as if he was too concerned about avoiding the sensational or the high-impact effect.

Hoss, who has starred in other Petzold films, is the very essence of fragility and desperate obsession. Zehrfeld’s Johnny is superficially persuasive, but we don’t really get enough of an opportunity to understand him or his motivation, other than the palpable need to survive under grave threats.

Uneven as it is, Phoenix has compelling moments, and the story can lure us in despite its puzzling reticence. At the end, the gun is still present, but it is Kurt Weill’s tune “Speak Low” that provides the striking denouement. Very rarely has a song been used so powerfully.

PHOENIX (2014) by Christian Petzold – Trailer from Richard Lormand on Vimeo.