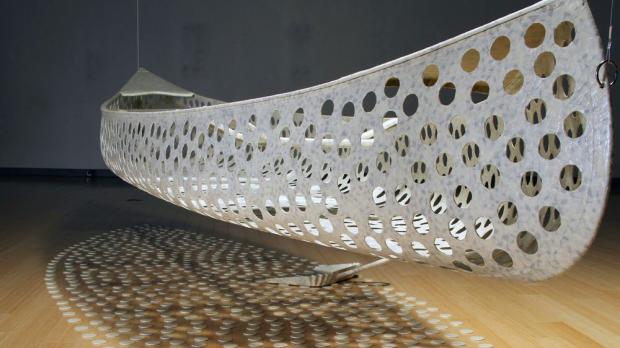 Tchotchke, trinkets, doodads…we all have keepsake objects in our offices, our homes, our cars; things we simply can’t part with. They carry a story of a moment we feel the need to hold on to, a touchstone backward in memory. Scrutiny of Objects, an exhibit by Robert A. Booth, is on view through the end of August at the Burchfield Penney Art Center. It explores this idea of how mundane objects become loved artifacts.

The exhibit is made up of ordinary objects—things most associated with yard work or homesteading. There are shovels, wood, axes, ladders, paint brushes, a wheelbarrow, and a lawnmower. Booth doesn’t just place these objects in the gallery for us. He arranges them carefully. He asks us to look a little more closely. Each work takes place on a large board where the objects are mounted and then hung on the wall or otherwise installed. Firewood (Haul) stands out. The focal point is a large wheelbarrow surrounded by mounted firewood. At first glance, I wanted to take the wheelbarrow down off the wall along with the wood and use them as they should be used, to haul things around or to burn for heat. But the word “haul” in the title suggests something far more valuable than firewood. This body of Booth’s work brings one to wish that such banal chores were not part of our reality, but rather part of some ritual.

Most everything in the exhibit is covered with small, torn pieces of masking tape. The time Booth spent to rip each piece of tape and place it in such a careful way reminds the viewer of memory. What is the artifact? Where is it from? What happened that day? Who was there? And how easily can a memory be covered over by something else?

In the center of the room resides a sculptural arrangement entitled Lawn Mowers (Cut). This piece is made up of colored tape meant to resemble grass with two push lawnmowers cutting through the “grass” in opposite directions. You can tell the grass has been cut because of the absence of the tape. With this piece Booth questions the silly things we do to keep our lives in an outward order. Do we need to remember how to cut the lawn each time? Should we consider not cutting the lawn in order to make time for more meaningful experiences?

Shovels (Dig) consists of eight shovels mounted on a long board which is painted black. Here Booth uses masking tape to create a careful pattern of polka dots. The shovels are mounted or hung to resemble trophies. Each shovel is also covered with small pieces of masking tape in an attempt to cover its real meaning—a tool with a broad flat blade and typically upturned sides, used for moving coal, earth, snow, or other material. But hardly—we all still know it’s a shovel.

Canoe (Float) has been punched with small holes allowing light to filter though. Hung close to the floor, the shadow created on the floor reminds its viewer that this boat once had a purpose, but now is only an artifact of that purpose. The show’s probable highlight is in how Booth has also taken all those parts that were punched out and placed them on the floor to resemble the shadow the canoe casts, recalling the symbiotic relationship between absence and presence. The boat doesn’t float, sure, but that doesn’t account for the fact that it’s no longer a boat.

In the adjacent gallery there is a group show entitled Body Norms, where you will find one of Booth’s earlier more figurative work is on display. This exhibit is up until August 30.