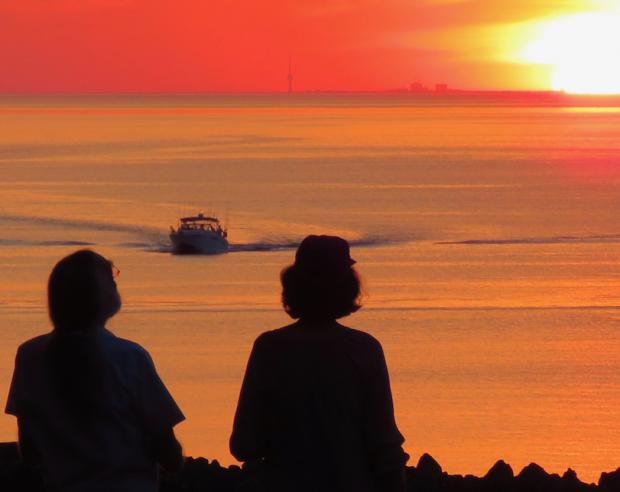 Is the sun setting on Lake Ontario? Shot from Olcott, Toronto on the horizon. Photo by Jay Jurney
by
Jay Burney
/ Aug. 18, 2017 11am EST

Is the Niagara Falls release more toxic than reported?

According to emerging reports, the original and widely reported release of raw sewage into the Niagara River that occured on July 29 was more toxic than is reported. In an interview on Buffalo State Radio’s The Literal Media, John Cunningham, a former maintenance supervisor at the Niagara Falls Wastewater Treatment Plant, claims that the news is being spun. Perhaps this spinning reaches into both the Niagara Falls Water Board and other reporting agencies.

Cunningham says that  the waste was “industrial” as opposed to residential sewage or street runnoff. He says that the material has been illegally dealt with at the facility. He says that the activity, including the release into the Niagara River of toxic industrial chemicals, is a violation of federal and state regulations. He says that the release is the result of criminal acts and that he would be willing to testify before a Grand Jury or any other investigting body.

And then there are those “rainy day” incidents. The Great Lakes are suffering from bad sewer systems that are responsible for raw sewer discharges when the systems are overwhelmed by rain. Systems managed by the Buffalo’s and the Erie County Sewer Authorities are plagued by combined sewer overflows (CSOs). These CSO’s are created when there is more rain than the system can accomodate without overflowing into the local waterways. CSO’s do create the mixture of streetwater runoff with untreated raw sewerage. The result is a dump of this poison into local rivers and lakes. This is one of the reasons why so many of our beaches are closed so often, especially after storms. This is why we may never have safe swimming in this part of Lake Erie in our lifetimes.  To those of you who are interested, the rainy days, often characterized as “once in” 100 or 500 year risks, are occuring much more frequently due, many believe, to climate change. We have had a dozen excessively rainy days in our region just so far this year. Last weekend brought another gusher to Niagara Falls, and the system was once again overwhelmed. Probable toxic chemicals were again dumped with untreated sewage into the river. These pollute the lower Niagara and Lake Ontario. Check this report in the Niagara Gazette.

The Niagara Falls plant, like all wastewater treatment facilities in New York State, is allowed to self-permit. This means that scrutiny by state agencies such as the DEC, and by citizens demanding transparency, is less accountable.

According to Cunningham, the release that occured on July 29 was due to a failure of the system. He blames the failure on negligence. The black stinking release was a result of  ”carbon fines”—a kind of filter—that blew out during a deliberate act to clean out a part of the system.

“These fines contain some of the most toxic substances known on earth. Nothing was treated,” Cunnningham says in the interview.

This material is meant to be landfilled but it has not been, according to Cunningham.

On top of that, he says, “No one at the Niagara Falls Sewerage Treatment Plant actually has a license to run the facility.”

This story was broken on AltPressOnline.

UPDATE: Friday August 18, 11am. Niagara Falls Sewer Treatment Plant employees have been issued a gag order by the water board and are ordered not to talk to anyone.

There is no equivalency between founding fathers George Washington and Thomas Jefferson and those Confederate generals that the nazi, KKK, and alt-white right nationalists spokesperson Donald Trump claims. Washington and Jefferson fought to create a democracy where all men are created equal. Those others, including the modern-day losers and low-IQ supporters who proclaim that they want to protect their “heritage,” tried to take that founding democratic government down.

Trump’s lies of the week include the whopper about General Pershing’s punishment of Islamic terrorist’s in the Phillipines. The debunked low-IQ infantile story about executions and pig’s blood is something you would expect in your spam box under “crazy uncle.” Or maybe under Paladino or Collins.

Trump’s off-the-wall defense of those awful, racist, and entirely not nice reprehensibles—individuals who marched in Charlottesville last Friday night, with Klan-inspired tiki torches, automatic weapons, and  chanting “seig heil,”  “kill the jews and niggers,” had not one single nice person. Not a man, woman, or child who marches with them or in any way supports them has a shred of decency. They are all in the same pot. They are all complicit to the murder of Heather Heyer, and so is Trump. And they promise, with the support of Trump, that more is to come. “This is our timen” said KKK advocate and former grand wizard David Duke.

Allen Zimmerman, president of the Congretation Beth Isreal, which was located near the site of the “permitted” march in Charlottesville, tells a harrowing story of armed white supremacists threatening the temple and chanting anti-Jewish threats.

Sit back and watch this frightening HBO/Vice News Tonight report from reporters that were embedded, so to speak, with the nazi’s in Charlottesville. “We are violent and we will kill these people if we have to”