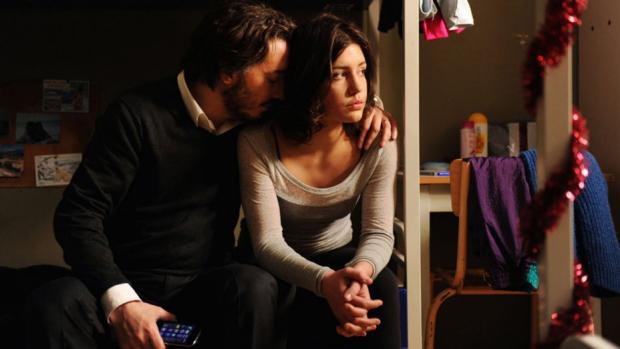 Two new films opening at the North Park today for a one-week run will appeal mostly to fans of le cinéma français.

Down by Love (originally titled Éperdument, which translates as “head over heels”) stars Adèle Exarchopoulos, the young actress who made such an astonishing starring debut in the sexually forthright drama in Blue is The Warmest Color. She plays a young woman serving time for an unspecified crime. When she is transferred to a new facility, she catches the eye of the warden (Guillaume Gallienne, an actor better known in France for comedies), who responds to her confusion and uncertainty and hopes to set her on the right track. Proximity has its effect and they begin an affair. Is she only using him to get her sentence reduced? Perhaps, but he falls hard, jeopardizing his marriage and his career.

Though writer-director Pierre Godeau was inspired by an actual case that was reported in the French press, he wrote his story without knowing any of its details. You might guess otherwise given the inconclusiveness of the film: it has the shapelessness one associates with reality. While Exarchopoulos’s character is adolescently unfocused, the actress herself is naturally compelling: she looks a bit like Sophie Marceau, but has the camera presence of Isabel Adjani. Gallienne, an acclaimed stage actor and member of La Comédie Française, has the more difficult role in that his character has the most to lose yet does the dumbest things.

The Student and Mister Henri stars the veteran actor Claude Brasseur, whose career goes back to Franju’s Eyes without a Face and Godard’s Band of Outsiders. He plays an elderly curmudgeon, living alone in the Paris apartment he shared with his late wife. Worried about his welfare, his son Paul (Guillaume de Tonquedec) convinces him to take in a boarder, a young student named Constance (Noémie Schmidt). Paul’s idea is that in exchange for the low rent Constance can keep an eye on Henri—make sure he takes his pills, that kind of thing. But Henri has a different idea. He tells Constance that she can have six months free rent if she helps to break up Paul’s marriage.

Writer-director Ivan Calbérac adapted the film from his stage play, and the plot synopsis sounds like material for a comedy. But while the early scenes are lightly comic as the college girl and the grump feel their way around each other (not literally—I guess I should point that out, given that this is a French film), the tone varies as the film goes on. The story never stays in one direction for too long, as if the cast was making the whole thing up as they went along, abandoning ideas as they get dull. It’s blandly pleasant, and the music is quite nice, but you’ll be hard pressed to remember anything about it a week after you see it.