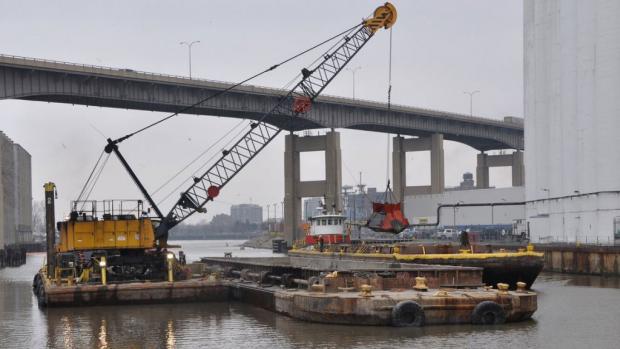 Three hundred and twelve miles west of Canalside, the Lake Erie city of Toledo, Ohio, has a water problem. Last August, the blue-green algae that bloom in summertime released a toxin that couldn’t be killed, so for two days the city of 287,000 had no tapwater. Boiling the water only concentrates the toxin, which rarely kills humans, but causes liver problems, nausea, and diarrhea.

This past week, the mayor of Toledo announced that the city will test its water every day rather than once a week because the same blue-green algae that made Toledo’s water poisonous in August 2014 is back again in August 2015. There’s a website with a warning scale that’s updated daily. There’s a rumor-rebuttal PR operation. But the algae are already back, not in the tapwater, but in the water intake. Various agencies and not-for-profit groups that track this stuff say that unless environmental policies in Michigan and Ohio change, annual poisoning will keep happening. The National Atmospheric and Oceanic Administration predicts that the algae bloom will peak in September. Stay tuned.

Meanwhile, 42 of Buffalo’s 59 combined sewer overflow outfalls are on the Buffalo River and on Cazenovia Creek. They will continue to gush raw sewage into the river every time it rains—meaning that paddle-boarders, kayakers, rowers, and anybody close to the waters of Canalside will be treated to untreated effluent. The Buffalo Sewer Authority’s map shows that 17 of the 59 outfalls dump into Scajaquada Creek, the Black Rock Canal, and directly into the Niagara River, but the rest give up the goods into the Buffalo River.

The fact that Toledo’s water troubles aren’t on Buffalo’s mind is no surprise. But in this political year, when the nine Buffalo Common Council seats, the 11 Erie County legislature seats, the county executive, and the supervisors of all 25 of Erie County’s towns are up for election, the silence on the Buffalo River’s water quality is remarkable.

Even as the party-centric policy of Erie Canal Harbor Development Corporation has succeeded in reshaping public discourse about Buffalo, any sensible water-user ought to ask: Why is there no information available, from any government or quasi-government, about the water quality of Buffalo’s new waterfront playground?

New York State maintains the Nowcast beach closing website. A more user-friendly source is maintained by Lake Ontario Waterkeeper at its theswimguide.org site, for which an app is available. The Erie County Health Department website links to theswimguide.org, and posts warnings about the five Erie County beaches it tests, but there is no information about Buffalo Harbor, Canalside, or the Buffalo River.

What’s strange about the gap in information is that New York State law requires testing for E. coli bacteria as a threshold for opening up a public swimming area, such as Woodlawn Beach, or Beaver Island, or any of the beaches in Evans township—but the sewer-overflow practices engineered into the Buffalo River system produce precisely the same bacteria. Recreational sailors and motorboat operators have used the harbor for decades; only in the last five years have rowers, kayakers, and paddle-boarders become users of the area. A recent report by Investigative Post showed that Gallagher Beach, another new recreation venue, is not monitored for either e.coli nor for other contaminants.

Scientists, clean water advocates, and government officials elected and appointed in Ohio have been forced to take action because Toledo’s bacterial poisoning crisis literally shut the faucets off last year and may well do so again within the next month.

Phosphate-based fertilizer runoff was identified as the primary culprit in making the blue-green algae bloom, so Ohio and Michigan officials have had to confront the interest groups—especially the big growers of corn and soybeans—because there really isn’t any question about whether to keep all 500,000 users of Toledo’s water safe or whether to impose a very slight cost increase on corn and soybean farmers.

Here, the economics are not so clear-cut—and that’s why the politics are pro-development but not pro-water. In other words, because there’s no imminent danger to the drinking water supply of hundreds of thousands of people in the Buffalo area, there’s no urgency.

So the Buffalo Sewer Authority’s 15-year remediation plan, which will eventuate in separating stormwater runoff from flushed sewage, grunts along at a very deliberate pace.

That pace quickened only in 2012, when, after a 13-year delay, the Buffalo Sewer Authority finally got around to concluding an agreement with the Environmental Protection Agency on how to come into compliance with the Clean Water Act, the federal law that forces municipalities to clean up their excrement-laden water. The ultimate cost of the fix could be as much as $500 million.

Buffalo’s landscape might yet be transformed by the project—if “green” infrastructure (stormwater-retention ponds, marshes, ditches and the like) gets mixed with in or even supplants the “gray” infrastructure of big underground storage tanks, big conduits, pipes, etc. The East Side of Buffalo, especially those areas closest to the Buffalo River, are the most relevant areas for this potentially transformative landscaping.

Could it happen here? Certainly—but it’s more likely to happen either after a crisis creates a broad, community-wide sense of urgency, or if something like the Seattle food forest becomes somebody’s project.

The Rust Belt is currently home to three very large-scale urban farming movements. Chicago and Detroit have the biggest projects, not surprisingly, being the largest Great Lakes cities. Cleveland has the most extensive urban farms, helped along by the engagement of Cleveland State University and by an economist who figured out that the entire population of Ohio’s largest city could meet all its annual fresh produce needs were available vacant land turned to growing food rather than left fallow. That calculation struck many as silly when first published, given the fact that something called winter occurs annually in Cleveland, but the point he made tests out: by volume, high-intensity agriculture can produce large quantities of food in places unaccustomed to farming.

Given the stubbornness of long-term population trends and of settlement patterns, the case for cleaning up the Buffalo River on a quicker pace than currently planned makes sense. Buffalo’s population continues to dwindle. The 2006 Gyourko & Saiz projections for Erie County are almost exactly on target for 2015; ditto the Cornell Program in Applied Demographics calculator, which sees Erie County shrinking to 800,212 by 2035, which is about when the Buffalo Sewer Authority CSO project will be completed.

Could having a clean river flowing through a cleaned-up, farm-filled urban landscape prevent or forestall a population drop of over 100,000 people within the next 20 years?

Or will a dwindling number of young people be content to play in a Canalside full of floatables?

Were Buffalo’s leaders to take a longer-term, maximalist view of water quality, sustainability, the economics of food, and our prospects for growth, we’d probably have a more urgent urban landscaping movement, a Cleveland-scale urban farming movement, and a clearer idea of what to do with the still emptying landscape of Buffalo’s East Side.

For the present, though, our prospects for economic revival are imagined as coming from a consolidating healthcare sector, an incremental increase in manufacturing, more outdoor concerts, and some condos. For the moment, it’s pass the Brita, vote for the candidates who keep mum, and hope that what blooms in Toledo stays in Toledo.