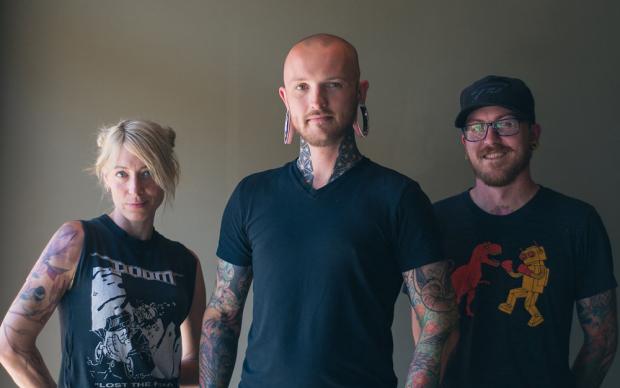 There’s a family portrait in James Wisniewski’s piercing studio dating to 1888. His great-great-grandparents. A mother, a father, and three children. Each is grim-faced: the parents weary from asking the kids to sit still, the children visibly aching with boredom. “They have to sit for 10 minutes; it’s hard to hold a smile. That’s why they’re so stern,” Wisniewski.

Wisniewski embodies a startling contrast with his ancestors: covered in tattoos up both sides of his neck, sporting three-inch spacers in his ears, and ready with a smile. After more than 10 years piercing and outfitting body jewelry for a clientele that regularly included celebrities in Los Angeles, the West Seneca native has returned home to bring the same high level of body art to Allentown.

Joined by four tattoo studios, Wisniewski has traded in doing work for pop singers Kelis and Rihanna as well as Twisted Sister’s Dee Snider and some of Snider’s family members to satisfy the growing appetite for bodily decoration in the Queen City.

Using a network of jewelry makers he has established during his years in the business, Wisniewski is encountering a great response to his services. He and his three tattoo artists are booked into October.

“We’ve been getting a lot of sales because people have piercings and they’ve never had access or known the jewelry was out there,” he says. “I have a lot of people coming to upgrade or just change their stuff. People that are, you know, a little bit older—40s, 50s—who had their nostril or ear piercing from years ago and they don’t like the look, looking like something a 16-year-old girl would wear. They’re like ‘I didn’t even think of this.’ And we do gold, and people are really looking for that. It’s been received really well.”

The resident tattoo artists—Thea Duskin, Rob Alsheimer II, and Kenneth Dumas—come with complementary experience and appreciation for the marriage between fine art and body decoration. Duskin, who like Wisniewski recently returned home after leaving the area shortly after high school, has operated an art gallery/tattoo studio in Richmond, Virginia called Ghostprint Gallery for years.

Later this year, Duskin will return to Art Basel Miami Beach to represent Ghostprint but will do so adding a new wrinkle. “This is our fourth year there as a gallery representing artists that we show there, but I wanted to do this as myself,” Duskin explained. “We’ve shown Amanda Wachob…she’s actually from [Buffalo] and does tattooed canvas. So we’ve shown a lot of tattoo art as fine art already. This was kind of the next step…I’m going to have my artwork on the walls and there will also be photography, black fine art photography. I’ve been working with professional photographers to get shots that are more contextualized with models so there’s a actual person who has the tattoo. So there’ll be some of those in one room, and another room with artwork that’ll be rendered into tattoos. And then there’ll be me tattooing [live].”

Like Duskin, Alsheimer has experience running his own shop, and like Duskin he is happy about his new arrangement at the Parlour. He recently sold his Blind Dog tattoo studio and has zero regrets. “My tattoos are better because I’m more comfortable in my environment,” he says. “I enjoy being here more than the other place. I was always working alone. So having other artists to plan with and bounce ideas off of—I didn’t feel like I was growing as an artist as much as I wanted to, and I never got into this for the business side, I got into it for the art side. I was just getting frustrated with the things that I never wanted to do. Let someone who’s better at it do that, and I can learn from them and try again later.”

Everyone in the shop is bullish on the upward trend in the business side of body art locally. Alsheimer points out that Buffalo is “a small-business-type town that’s heavy on the arts. It kind of goes hand-in-hand.”

Duskin agrees: “I think Buffalo has one of the most interesting tattoo scenes in the whole country. It’s very diverse and there’s a lot more experimental artists here than anywhere else. Here you’ve got a huge tradition which is very unusual for the US: experimental color work that you don’t see anywhere else. Even Richmond, number three [for tattoos] in the county, and it’s almost exclusively traditional American work. You have hardly anybody doing anything else.”

In combination with the growing societal acceptance for body art, the Parlour believes it’s a good time to be in Buffalo. The gorgeously appointed and comfortable studio, which Wisniewski painstakingly rebuilt from its most recent aesthetic—drop ceilings, fluorescent lights, low-pile carpets, dilapidated office space—brings a new level of service, experience, and professionalism to the industry.

And maybe, who knows, Wisniewski may have brought a slice of LA with him. Earlier in the summer, a former client of his working on a musical tour that visited Canalside looked him up and dropped in for some work.